I've been asked on several occasions what tie-ins I would recommend as essential to the overall Final Crisis story. Other than Superman Beyond and the Batman issues, I don't think there are any others that include any necessary plot information, and in most instances, inconsistencies from the tie-ins to the main series might frustrate those looking for a perfect fit.

Also, when listening to the Comic Geeks Speak podcast on Final Crisis 7 (which was largely negative about the series as a whole), I was struck by a comment made by one of their callers. The caller complained about all the unnecessary or unrelated tie-ins that DC "made" him get. While I think there is legitimate criticism to make of DC thinning the Final Crisis brand, especially on something like Rage of the Red Lanterns, I also think it's odd to say that DC made anyone buy anything. But the expectations set up by the brand caused a lot of readers to reject or dislike otherwise good stories.

But I like Intruder W's comment about Submit in my last post: that Submit is a model for the type of spinoff that could be done from the main story, taking an idea hinted at, or a plot element alluded to, and develop a story around it. And the tie-ins have varying degrees of success when it comes to how well they do this. So, as I discuss the non-Morrison-penned tie-ins, I will be looking at their connection to the main story as well as their overall quality. 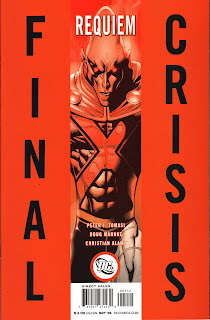 Final Crisis: Requiem, written by Peter Tomasi and drawn by Doug Mahnke and Christian Alamy, appeared first, and it fills in what many readers thought was the too-abrupt murder of the Martian Manhunter in Final Crisis 1. 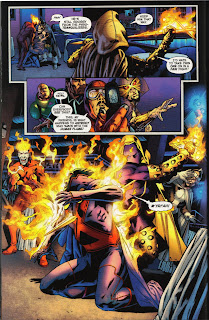 In fact, in Requiem, J'onn puts up a fight that lasts for several pages, giving him a more heroic send-off that many fans thought he deserved. 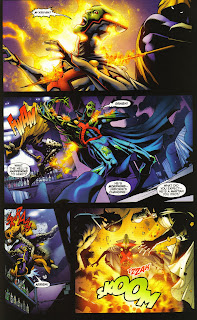 His fight also includes a psychic attack on all the villains present, with each one imagining his death at the hands of his arch-nemesis-- 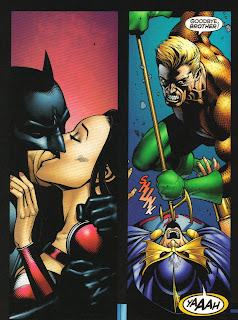 --with the exception of Talia, who just starts making out with her fantasy Batman (one nitpick: Batman should be shirtless in that panel).

In this sense, Tomasi does a good job expanding on just a couple of scenes in Final Crisis 1, and Requiem develops a clear purpose: the reader has enough information about J'onn J'onzz's death to know what's going on in Final Crisis, but if the reader wants more information, or wants a more heroic exit for the hero, then Requiem is there for that. (Also, Doug Mahnke's art is much cleaner here than it is in Final Crisis 7.)

One problem emerges in this tie-in that will also plague others: the fit with Final Crisis is not perfect. One of the biggest problems that surfaces in these ancillary stories is the status of Hal Jordan and Batman. Both have pretty tight continuities in the main series, and both appear to be doing things that don't fit with those continuities. Batman is especially a problem, becuase of the lack of a clear transition from Batman RIP to Final Crisis. If Batman's supporting cast thinks he's dead, then how is he showing up for the funeral and driving the Batmobile around Gotham? Personally, this doesn't worry me that much, but I can see how it would frustrate some readers who take more pleasure in continuity than in story. 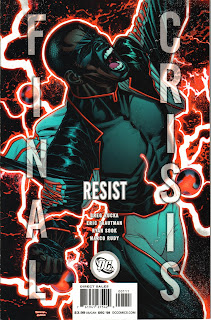 I'd be curious to hear what readers thought of Final Crisis: Resist. I stopped reading Greg Rucka's Checkmate series after the first year, so I was not up on the status quo of that organization when I first read this issue (and when did Snapper Carr get teleportation powers?). I place this story in the space between the last pages of Final Crisis 3, after Oracle has shut down the internet, but before Darkseid's total victory that the Flashes find after they've moved forward in time. I'm sure this one has several continuity problems, like Mr. Terrific's inconsistent location, but none really detract from the overall quality of the story, which is pretty fun. I especially enjoyed the fact that Snapper Carr and Cheetah hooked up. This is exactly the sort of thing I would expect to be happening at the end of the world. 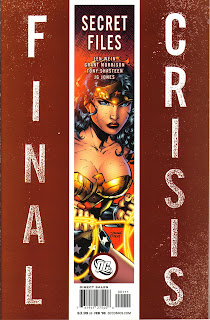 If the first two at least attempted to fill in important or interesting story gaps from the main series, Final Crisis: Secret Files fills in a gap that is neither important nor interesting: the secret origin of the villain Libra. While I'm glad DC gave the job to the character's creator, Len Wein (and I'm glad to see Wein writing again for DC in general), I thought the character worked better as a mystery. The origin story is also fairly mundane, making Libra an abused kid who gets some assistance from Darkseid to become a one-off JLA villain. If anything, this makes the villain less interesting than he is in Final Crisis.

The back of the book contains more of J. G. Jones's sketchbook pages, with further evidence that he and Morrison generated a bunch of crazy ideas that barely made it into the series (including the new Aquaman, who only shows up in two panels). 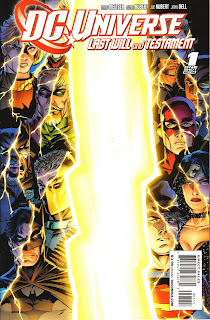 For the sake of completion, I want to mention DC Universe: Last Will and Testament, by Brad Meltzer and Adam Kubert. Though this comic doesn't come with a Final Crisis label, the story does take place during the Crisis, and the format is basically the same. Because I wasn't present for any of the editorial decisions that went into this series, I hesitate to speculate on why this wasn't specically labelled a tie-in. Perhaps there were early concerns about diluting the brand that were later abandoned. But I do get the sense that, due to the fact that both Meltzer and Kubert are notoriously slow, the creators were given a lot of lead time on this book, and the were, therefore, given only the most cursory information about the plot of Final Crisis. Characters--again, Batman and Green Lantern, but also Superman, Flash, and probably some others I didn't notice--are used in ways that don't agree with the rest of Final Crisis. But, more importantly, the main story about Geo-Force seeking revenge on Deathstroke just isn't that interesting, and it does little to overcome the issue's other flaws. Like Secret Files, this is a forgetable story that also fails as a tie-in to the main series.

Overall, these single-issue tie-ins don't take full advantage of the potential that Final Crisis holds for these ancillary stories. Of the four, only Requiem and Resist deliver on that potential. Although I hesitate to say that DC should have done more tie-ins, there may be some good stories that have yet to be told.

I refuse to sully my cache with a Google search, but I'm pretty sure Snapper got powers in Invasion!, via the metagene whim-wham.

Anonymous--I had forgotten about that. But then I don't remember Snapper having those powers in the Hourman series.

Yeah, Snapper was given superpowers during Invasion! for when he was in space (as part of "The Blasters," was it?), but lost them. I believe he actually had his hands removed and got new, power-less hands, as was told in Hourman. Although it's been a damn long time since I read Hourman.

Re: Last Will and Testament, it was announced as Final Crisis:, but got changed to DCU: at some point, presumably because the continuity was so off. In addition to the characters being in different places at different times, wasn't the premise also how they spent their last hours before the end of the world, while in Final Crisis the end of the world sorta snuck up on everyone...?

I loved Resist just for the fact that it we got an extra issue of Checkmate by Rucka, though people who never read the series (there were a lot of those) were probably annoyed or confused at why this tie in.
It also allowed Rucka to come to a temporary conclusion with his Sasha Bordeaux stories, while taking her off the table for a while (presumably until he returns to write the character).
Certainly not a "necessary" tie in. Though most of the tie ins were excuses for DC's other top writers (Johns and Rucka) to write their favorite characters with Morrison's larger story as a foundation (both for story and marketing).