Final Crisis: Rogues' Revenge, by Geoff Johns and Scott Kolins, was probably my favorite of the tie-ins, though I'm liking Legion of 3 Worlds a heck of a lot (I will cover that series once it's completed). Though I have read complaints that Rogues' Revenge was not tied in to Final Crisis enough, I would argue that it was tied in just enough. While it isn't essential to the main series, Rogues' Revenge does follow a logical tangent from it that comes out of the first few issues without contradicting them. This makes for the best kind of tie-in to a major event like Final Crisis: the main series has created a space for a story like this, yet it can also stand on its own, as the reader is given all the necessary exposition. And the story is told in a tight three-issue series. 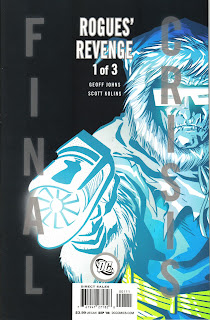 The primary purpose of Rogues' Revenge seems to be bridging the gap between, on the one hand, the death of Bart Allen, Salvation Run, and Countdown (the Pied Piper and Trickster plot) and, on the other hand, the upcoming Flash: Rebirth series. That may seem like a lot of continuity to keep up with, but this is one of the things Geoff Johns does well: tie together continuity threads while still managing to tell an entertaining story.

And Rogues' Revenge is a lot of fun. During his run on The Flash, Johns understood the importance of these villains to the series, and he had managed to flesh out their backstories to make them more interesting characters and to give a clear motivation as to why they would work together (they are mainly held together by the strict leadership of Captain Cold, who understands each rogue's damage enough to keep them in line). 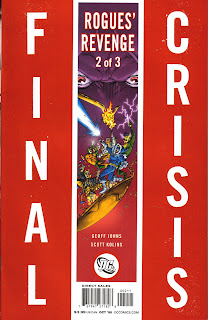 Rogues' Revenge opens with the villains on the run for some time after the events of Salvation Run. They are being pursued on two fronts: the heroes want them for their responsibility in the death of Bart Allen, and the villains are after them because they refuse to join Libra's new society of villains. They choose to fight the society while also evening the score by killing Inertia, the villain truly responsible for Bart Allen's death.

Johns is a straightforward, entertaining storyteller who uses continuity as a launching pad for new stories. In this sense, his style contrasts that of Grant Morrison on the main series. Though I find both approaches to comic storytelling equally valid, I can see why many readers preferred Johns's more accessible approach. I'm entertained by Johns's comics (though I don't quite understand his obsession with traumatic arm loss), and I tend to follow whatever he does. However, it's also clear that we have a lot of the same touchstones when it comes to the comics of our youth, and that may very well be influencing my enjoyment of his stories. 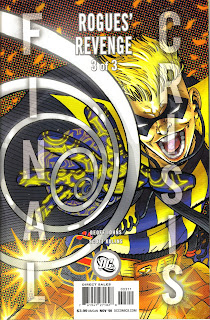 To look at one particular characteristic of Johns's storytelling style, I'm using a couple of scenes not from Rogues' Revenge, but from Final Crisis: Rage of the Red Lanterns, a tie-in that many readers cited for its failure to connect to the main series.

Early in the book, the reader is reminded by the following image that the Guardian known as Scar is connected in some way to the Sinestro Corps, as indicated by the Yellow Lantern symbol that appears in her pupils (the Black Lantern symbol also appears there in an earlier panel). 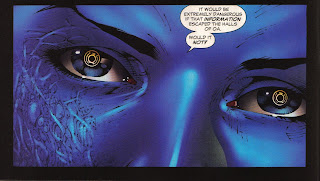 Later, when Green Lantern John Stewart questions how the Sinestro Corps managed to ambush them, we get a cut to another panel showing Scar's pupils.
> 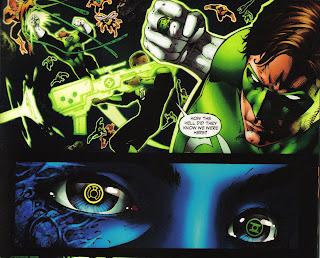 On the one hand, this is just clear storytelling, repeating information in order to make sure the reader is following along and can continue to follow. On the other hand, however, this is an unnecessary repetition that doesn't account for readers' intelligence or attention to the details of a comic that takes less than 15 minutes to read from cover to cover. In Final Crisis, Morrison would not have cut back a second time to Scar's eyes, as the first shot pages earlier should have done the trick.

I will say one more thing about Rage of the Red Lanterns: despite the claim on page one that "these events take place between Final Crisis #1 and #2," that connection seems unlikely. Hal Jordan, John Stewart, and the Alpha Lanterns have a pretty tight continuity in Final Crisis, and there is just not enough time for these events to occur. That being said, Rage of the Red Lanterns is still an entertaining story regardless of where it fits in relation to Final Crisis. It probably would have been best, however, if DC had left off the "Final Crisis" label from this book.

DC has recently solicited some of the Final Crisis collections. Here's the copy for the Rogues' Revenge collection:

Written by Geoff Johns, art and cover by Scott Kolins.

In the face of Final Crisis, Johns and Kolins revive the most ruthless Rogues Gallery of them all! At times, they've been laughed at, ridiculed and hunted -- but The Flash Rogues Gallery has had enough. The team of villains decides to remind the world why they're not to be messed with in this hardcover collecting their return in Final Crisis: Rogues Revenge #1-3 as well as a couple of their greatest hits from The Flash #182 and #197.

It's nice that DC is padding the collection out with two of Johns and Kolins's best single issue stories from The Flash: the origin of Captain Cold and the new Zoom, respectively. I would say that Flash 182 is the best issue of their entire collaboration. However, due to the importance of Weather Wizard's son to the story's climax, I would have liked to see Flash 175 and 176 added as well, which established the relationship between father and infant child.

I'll have more on these collections in a later post, along with my comments on Final Crisis: Revelations.
Posted by Dr. K at 11:19 PM

My main complaint about Rogues' Revenge is that, since Inertia was already effectively "dead," the puprose of the whole series seemed to be "bring Inertia back to life just so I can then kill him again real good."

Plus, the whole cast weeping "we never meant to kill him, it was always a game, we were tricked into killing Bart" sure belies the 92,345 death traps they put Barry and Wally into. Man up, Rogues.

And since Johns' always knew he was bringing Bart back in Lo3W, the whole "people hate us becuase we killed Bart" point would have been moot in a few days anyway, comic-time.

"sure belies the 92,345 death traps they put Barry and Wally into"

it was stated many times in Johns' run that they NEVER actually intended on ever killing the Flash or any of his loved ones, they realized that doing so would just bring the full force of the JLA and every other super team on earth on their asses and they'd end up being exiled to a horrible miniseries where all the D-list villains get killed by aliens and the Joker gets into a fight with Luthor