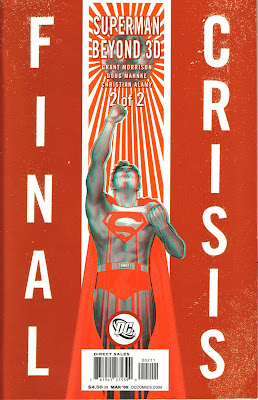 Many critics of Final Crisis have complained--rightfully so--that too much important stuff happens in the two issues of Superman Beyond that should be included in the main series. Essential information about Mandrakk (who only shows up in the main series in the final issue), the origin of the Monitors, and the nature of the multiverse appears in Superman Beyond, and I would also argue that many keys to reading Final Crisis appear here as well, especially since reading itself is such a crucial part of Superman Beyond.

However, the two issues are also tied together through the use of 3D technology--a gimmick I appreciate in spirit if not in practice, as the 3D glasses don't fit around my regular glasses very well, and the 3D effects always come off as distorted for me.

The 3D glasses, or "Overvoid Viewers," themselves are presented as artifacts of the story world and, therefore, provide the most obvious example of Morrison making the reader a part of the story. Like Superman, we get to upgrade to "4D Vision" in order to see the story as he sees it. In fact, the Overvoid Viewers are "forged from Superman's own cosmic armor" that he wears in issue 2. And the 3D effect, when it works, enhances images where Superman reaches through the page and out to the reader. 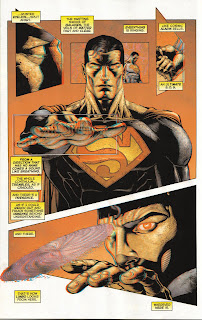 I like Douglas Wolk's analysis of this page. He reads the caption text about "A sound like breathing" and "The whole continuum...trembles, as if cradled" as a reference to the reader's relationship to the comic: the reader breathes and cradles the comic in his or her hands.

This isn't the first time Morrison has done something like this--he's done it before in Animal Man and The Invisibles in particular. In fact, as both Wolk and Marc Singer (among others) point out, Superman Beyond is heavily self-referential to the point of having an autobiographical subtext (I especially like Wolk's reading of Morrison's "anxiety of influence" over Alan Moore). Morrison "self-quotes" from almost all of his major works here, including Animal Man, The Invisibles, Zenith, and JLA (especially Rock of Ages, World War III, and Earth 2).

This may lead to accusations that Morrison is repeating himself, and I will admit he does crib a lot of the best bits from his JLA run, though I don't hold that run in as high esteem as a lot of Morrison fans. (For one, that's the first of Morrison's works where I got the sense that the final product really missed something in the transition from script to page. It's been a problem in Morrison's career that artists seem to have difficulty bringing his vision to the page. I'm trying to be politic here because, as some commentors have pointed out in earlier posts, that may not be a problem of the artist per se, but rather a failure of communication from the writer to the artist.) 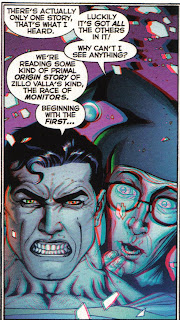 I would say, however, that Superman Beyond (and Final Crisis in general) does not represent a mere repetition, and that Morrison does move forward with ideas that have been developing throughout his career. In particular, Superman Beyond presents the clearest articulation of Morrison's idea that the shared universe and continuity of a comic book company is essentially a single story (or a "self-assembing hyper story," to be precise). The infinite book that Superman and Captain Marvel read obviously embodies that concept (and it makes my head hurt just thinking about it. One would assume, if it contains every book possible, that it contains every rumored, aborted, or unpublished story in the DC Universe as well, meaning I could read Alan Moore's "Twilight of the Superheroes" and Rick Veitch's final, censored Swamp Thing story, or Jamie Delano and Neil Gaiman Swamp Thing run that was supposed to follow Veitch's or ....).

As in Final Crisis, Morrison finds moments here that show how he perfectly "gets" a character. And in this exchange, we see both the quintessential Superman and Ultraman: 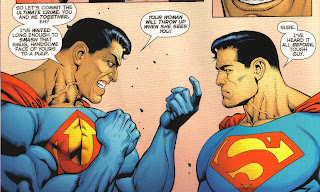 Morrison also makes a strong case here for keeping the Fawcett-style Captain Marvel around, even if he is relegated to Earth-5. Though Superman and Ultraman are meant to form a "symmetry" that, when brought together by Allan Adam (who, as a Dr. Manhattan analogue, represents the logical conclusion of the Superman concept), combine to defeat Mandrakk, Captain Marvel serves as an important complement to Superman as well. Captain Marvel can, after all, read the infinite book, and he intervenes to keep Superman and Ultraman from destroying each other. Captain Marvel is a character who works fine in his original conception, and I don't understand why DC feels the need to keep screwing with his status quo, especially by darkening the character up. But I also think the character works best when kept to his own separate universe, with its own rules, logic, and continuity, and perhaps Morrison is making that possible here.

In rereading Final Crisis for these posts, I've treated Superman Beyond as Final Crisis 3.1 and 3.2. I'm assuming that Legion of 3 Worlds will explain how Superman got from Lois's bedside to the 31st century in FC 6, but the delays in that series leave that particular story connection up in the air. Next, I'll touch on Batman 682 and 683, as well as Final Crisis: Submit and their relation to the overall story. 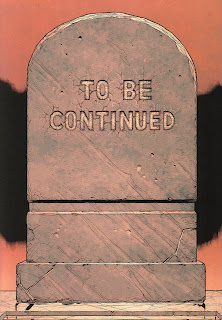 There was also a bit with Zatanna reaching out to the reader in Seven Soldiers, but it turned out she was reaching for the Seven Unknown Men of Slaughter Swamp through the inside view of a typewriter. Of course, with how bald they are they do resemble Morrison himself. It seems one of Morrison's hallmarks as a writer (since Animal Man) is how deeply involved he is as a character in his own works. Is it an attempt to blur the fourth wall or is it an attempt to make himself part of the fiction?