Blackhawk Wingsdays 2: If You Are Going to See Porcupine Man, Be Ready to Get Wet!

Blackhawk stories from the early 1960s demonstrate that the writers really lost sight of the team's core definition as heroic aviators. Instead, the Blackhawks were awkwardly put into some weak, generic crime-fighting plots, often featuring even lamer villains. With the exception of Tiger Shark, the Blackhawks really don't have nemeses that return to fight again and again, instead fighting one-off villains like as exemplified in this week's installment: "The Porcupine--Man of 1,000 Quills!" the second story from Blackhawk 187 (Aug. 1963). 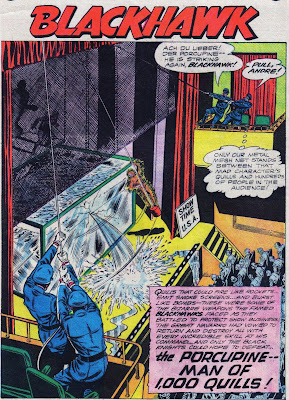 Which one of these guys is Andre?

I love this splash page because the Blackhawks are working their asses off to keep the front rows from getting a little damp, and the audience doesn't seem to be terribly alarmed. This image also sends me on a trip down memory lane, as it reminds me of the time when, at the age of 10, I saw Gallagher perform his fruit smashing routine at a boat show in Fargo, ND. Those of us sitting close to the front were warned that we would definitely get wet. I really wish the Blackhawks had been there to save me from that shitty show.

This story begins with the Blackhawks out on the town enjoying a variety show called "Show Time USA" (actually, only Blackhawk, Andre, Hendrickson, and Olaf are in attendance. Chuck, Stan, and Chop-Chop are clearly not fans of live theater.). Suddenly, their entertainment is disrupted by the appearance of the Porcupine Man! The villain intrudes on some kind of acrobatic act by launching "tear gas quills" at the audience, then firing grenade quills at the set. 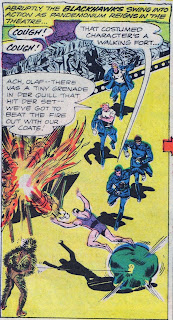 He also pops one gymnast's aerobics ball with a quill that appears to come from his crotch.

The Blackhawks bum rush the stage, but in typical fashion, they take too much time to recount what is happening to catch Porcupine Man before he escapes through the stage's trap door. The Blackhawks then decide to investigate even though this really falls well outside their wheel house as, you know, aviators.

The team soon learns from producers Baker and Clark that the Porcupine Man is really a disgruntled ex-employee--Navarro, the Knife-Thrower. Navarro was exposed as a fraud when Baker and Clark revealed to the press that their star actually used heat-seeking devices and magnets to draw his knives perfectly on target. Navarro attacks them during the press conference and then escapes to a nearby zoo, where he picks up some discarded porcupine quills and expertly throws them at some streetlights in order to make his escape under the cover of darkness.

Clearly, if Navarro can throw some random quills and knock out a lightbulb, he did not need to be cheating in his act. The guy is freaking Bullseye.

Blackhawk comes up with a plan. First, they're going to make light Statler and Waldorf and dispell wry, caustic barbs from the balcony. 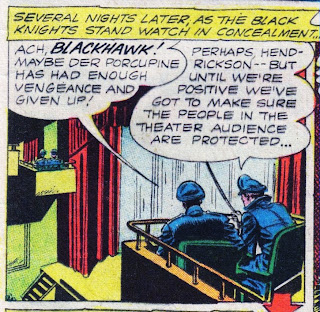 Porcupine Man makes his escape backstage and heads for the roof, while also launching a volley of "arrow quills" (or are they "quill arrows"?) at our heroes.

I'm pretty sure that one of those arrows came out his ass.

Porcupine Man then uses "jet quills" to escape from the roof, which really makes me feel like this whole quill gimmick is completely played.

The Blackhawks find a clue that leads to Porcupine Man's hideout--a luxury treehouse (or, as Andre describes it, "A fantastic tree house built in ze giant oak!" At least, I assume it's Andre from his outrageous accent), because, as one Blackhawk puts it "Porcupines live in trees!"

Inside the treehouse, the team finds Navarro in bed, with a porcupine costume hanging in the closet. Navarro, however, denies any knowledge of the Porcupine Man's activities, claiming he's been held captive in the treehouse for several days. Blackhawk, upon inspecting the costume, starts to suspect that Navarro may be telling the truth.

Baker and Clark arrive, only to be attacked by the Porcupine Man, who professes his innocence. He throws down a quill, and Clark immediately screams out that the quill is a time bomb! Porcupine Man then reveals himself to be Blackhawk, who set up this charade in order to get Clark to confess. You see, earlier, Blackhawk noticed that the goggles in the porcupine costume were made of perscription glass, and that led him to suspect the bespectacled Clark as the real villain. Clark's motivation was similar to countless Scooby-Doo villains--he wanted to scare Baker into selling his share of the show. But, as Andre points out, "Ze only show you'll be putting on now...will be before ze judge." What a witty Frenchman!

Up next: A very special Blackhawk story, guest-written by Oscar Wilde!

The Importance of Being Chop-Chop?

The Portrait of Olaf Bjornson?

Wow, this sequence makes me content I've never bothered with b-list superheroes. Bring back the fertile nazi seductress with psychopathia for the next installment, please.