Blackhawk Wingsday 1; or, All I Need to Know About Multiculturalism I Learned from Blackhawk

Recently, I've been inspired by stuff like Dave Lartigue's "Space Cabby Sunday" and Tom Katers's "Tom vs. the Flash" podcast to add a new weekly feature to the site: Blackhawk Wingsday! Basically, every Wednesday, I'm going to cover one story from my collection of Blackhawk comics. I may jump around in the collection a bit, though I am going to start in the Silver Age and work my way back sometime later (and I want to save the Blackhawk Showcase edition for a time when I run out of original issues). With the collection I have, which is by no means complete, it will still take me a couple of years to get through all of them, one story at a time.

Also, my earlier posts on Chop-Chop and "Blackhawk in Bondage" are among the most popular in this blog's history, though I think some readers arrive at the latter and find that what they wanted is not what I have to offer. Whatever the case, I want to establish myself further as the internet's #1 Blackhawk scholar, and not just the top hit for Google searches of "bondage doctor."

Before I get started, I just want to point out that I love Blackhawk more as a concept than I do in practice. The idea of a team of international aviators fighting the world's enemies hooked me in when I was a kid, yet the stories never really lived up to my expectations. Even with writers like Arnold Drake, France Herron, and later Bob Haney writing the series during the Silver Age, it was never very good, though it does have its charms, and it occasionally veers into batshit insanity. And when it doesn't, it still has enough casual racism and ethnic stereotyping to get us through the rough patches.

The first story I'll be covering is "One of Our Blackhawks Is Missing," from Blackhawk 187 (Aug. 1963), the title of which is a riff on Powell and Pressburger's 1942 film, "One of Our Aircraft Is Missing," which was later riffed on in 1975's "One of Our Dinosaurs Is Missing" (which also shares some casual racism with Blackhawk), a Star Trek episode, a Lost in Space episode, a Man from U.N.C.L.E. movie, and several dozen Silver Age comics. 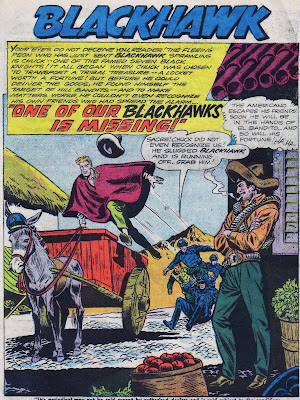 In this story, Blackhawk team member Chuck--the American--is sent to Central America in order to transport a valuable necklace from an Aztec village that needs to sell its artifacts in order to "shake off the bonds of poverty," as the chief explains. (The Blackhawks completely lost this particular income stream with the advent of eBay.) Chuck decides to wear the necklace for safekeeping, even though everyone knows that you don't wear emeralds with blue leather.

Meanwhile, some guy who doesn't look at all conspicuous in his trenchcoat and fedora calls in some organization named the "Spade Squadron" (which, knowing Blackhawk comics, is probably a racial slur). 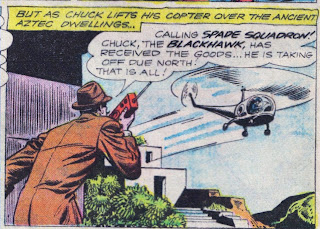 As Chuck flies away, oblivious to the danger that's coming, he radios Blackhawk Island to let them know that he is on his way with the emerald locket and a special gift from the chief. But just as he is about to reveal what that special gift is, he's shot down, leaving the reader to guess that this secret gift will turn out to be instrumental to the story's conclusion.

Chuck then bails out of the helicopter using a parachute, which has to be a really terrible idea. 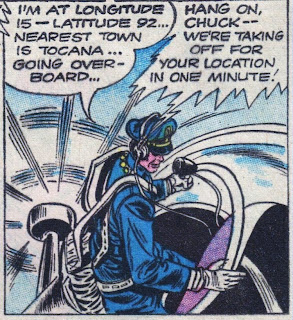 Much to Chuck's surprise, he lands in Dillon, South Carolina, face to face with the worst tourist attraction mascot on the east coast.

(Seriously, I drive past at least a dozen "South of the Border" billboards during my commute home, one in particular with grinning mascot Pedro telling me to "Bear up a leetle longer!" while a polar bear sits in repose across from him, and this just make me sad.)

Chuck is now in a double bind: both the banditos and the Spade Squadron want the necklace. However, the two groups engage in what can accurately be described as a "Mexican standoff," and Chuck tries to take advantage of the distraction to escape.

Unfortunately, Chuck gets shot in the head and belt, losing both his memory and his ability to hold up his pants. 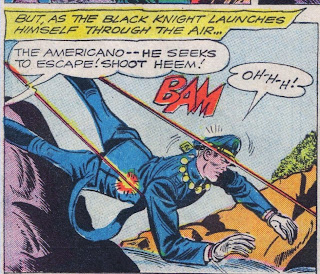 Chuck wakes up later in the bedroom of a local farmer. 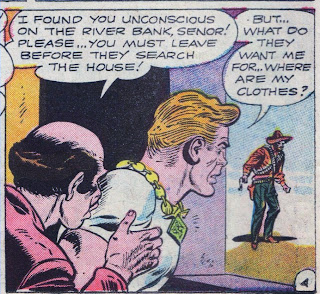 Chuck has two questions, expressed in reverse order of importance.

With his blue leather coat and jodhpurs ruined by the river, Chuck must make himself blend in by borrowing some of his host's clothes, which are, for some reason, kept in the barn. He also steals a sombrero from a donkey and proceeds to practice napping so that he fits in with the locals. 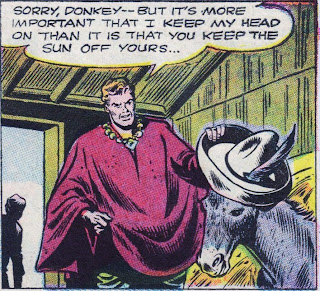 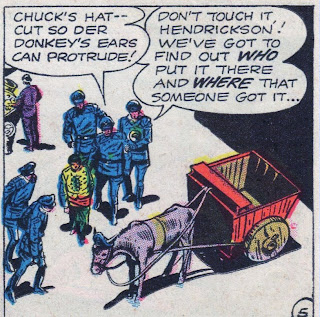 To the Blackhawks' credit, they did not assume that Chuck had been turned into a donkey.

Amnesiac Chuck sees the Blackhawks arrive and assumes that they are yet another group after him. So, he decides to take aggressive action: 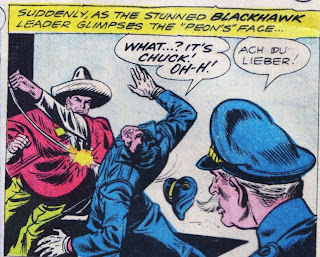 I think that Chuck is really just faking his amnesia here, and is, instead, fulfilling a long-time dream of beating the shit out of Blackhawk.

One of the common problems with Blackhawk adventures, as we see in the above panel, is that one person, usually Blackhawk, gets in on the action, while the others stand around and provide play-by-play or blurt out their ethno-specific expressions, like "Ach du lieber!" or "Py yiminy!" or "Sacre bleu!" or "Dagnabbit!" or "Dios mio!" or "Bozhemoi!" or "Frak!" or "Shiny!" or "Airwolf!" or whatever. Another problem is that the Blackhawks all wear the same uniform, with the exception of Chop Chop, and they can only be distinguished by these catch phrases and their outrageous accents. Chuck, though, does the right thing here by taking out Blackhawk, as none of the others are about to do anything to help.

As Chuck escapes in the wagon pulled by the donkey bearing his cap, the other Blackhawks manage to find horses somehow and give chase. Meanwhile, the banditos are waiting in ambush.

Then, following the basic rules of comic book biology, Chuck has to get shot in the head again in order to get his memory back.

The banditos try to escape with the locket, but the leader is quickly snatched up by the Spade Squadron helicopter. He is, however, rescued by his men when they shoot out the rope holding him, and the Blackhawks all stand by and explain what's going on in the panel.

The Spade Squadron goes after the head bandit, but before they can catch him, he throws the locket into the river, and it is lost forever.

Luckily, we have that little clue from the beginning of the story to give us hope that all is not lost. In fact, Chuck--or, more specifically, Chuck's donkey--has the real necklace in the lining of his cap, and the one thrown over the cliff was a fake given to the Blackhawks as a gift for helping the Aztec villagers. 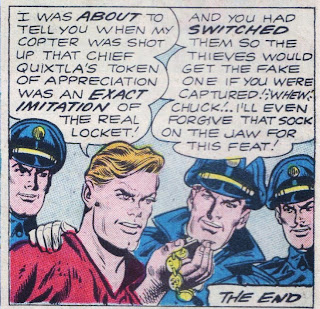 Though everything worked out in the end, I have to think that this gift was a terrible idea on the Aztec chief's part. Chuck, like most of the Blackhawks, is just not that smart, and it would be pretty easy for him to mix up the real and the fake. In fact, for all we know, he did mix them up, and now the Aztec villagers are doomed to spiral further into poverty, as the fake necklace only yields a couple of bucks at the Blackhawk Island pawn shop. At least Chuck got to punch Blackhawk in the jaw.

Coming up next week: The Blackhawks discover an act that is even worse than Gallagher!

I am so happy that the internet now has one place to go to study Blackhawk.

Ah, the Blackhawks. I didn't know much about Blackhawk when I was a kid, except that it was my dad's favorite comic book when HE was a kid.

The Blackhawk Archives is a nice book -- but, OH, the casual racism and sexism in the old stories is SO painful.

"To the Blackhawks' credit, they did not assume that Chuck had been turned into a donkey."

I'm guessing that Hendrickson looked closely to make sure.

I guess to Chuck, being able to punch out Blackhawk makes it all worth it in the end. He did look SO pretty wearing that necklace though.