Blackhawk Wingsdays 3: Blackhawk Discovers that All Art Is Quite Useless

"The moral life of man forms part of the subject-matter of the artist, but the morality of art consists in the perfect use of an imperfect medium. No artist desires to prove anything. Even things that are true can be proved. No artist has ethical sympathies. An ethical sympathy in an artist is an unpardonable mannerism of style. No artist is ever morbid. The artist can express everything. Thought and language are to the artist instruments of an art. Vice and virtue are to the artist materials for an art." --Oscar Wilde, The Preface to The Picture of Dorian Gray

We now finally come to Blackhawk 187's final story, which also happens to be featured on the cover, so now I can scan my ratty-ass copy of the comic: 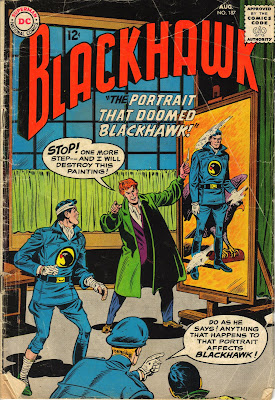 "The Portrait that Doomed Blackhawk"--written by either Arnold Drake or France Herron and drawn by Dick Dillin and Chuck Cuidera (no credits are given for any of the Blackhawk stories during this period, so I'm making an educated guess here, though Dillin and Cuidera's long run on this title is well-documented)--is the umpteenth variation on Oscar Wilde's The Picture of Dorian Gray used in Silver Age DC comics.

The story opens at the local "Museum of Fine Art," where a new work is being unveiled in a special ceremony: 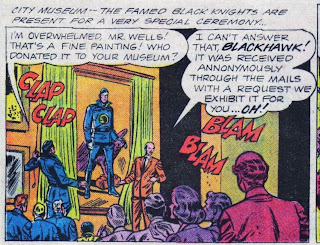 Apparently, this museum is so hard up in these tough economic times that it will just accept anybody's shitty art sent through the mail and then meet the anonymous donor's ridiculous demands to unveil the painting at an elaborate ceremony.

The festivities, however, are interrupted by the sound of gunfire, and the Blackhawks have to move into action, taking their supercharged command car to chase some nearby bankrobbers.

As usual, Blackhawk launches into action, while the other team members do what they do best--sit back and provide play-by-play. Blackhawk knocks out the two perps and manages to bring their car to a safe stop, while the other six Blackhawks find a decent parking spot.

Unfortunately, Blackhawk broke his wrist while punching the bad guys, and much to everyone's shock, the painting of Blackhawk simultaneously suffers damage to the same hand. This gets a "Py Yiminy!" out of Olaf, but it is quickly dismissed as a bizarre coincidence, and the team returns to headquarters.

The following day, the team is involved in training maneuvers, and Blackhawk decides to practice screwing the pooch, so he ejects himself from his jet. In another freak accident, Blackhawk bangs his head on the canopy during ejection, and Stanislaus takes surprisingly quick action to save his concussed leader.
. 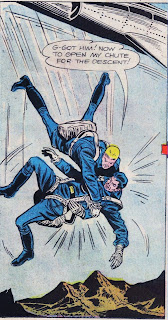 Again, Blackhawk's injury is reflected in the painting, and the team decides that this is no longer a coincidence. However, with Blackhawk seriously injured, the rest of the team has to get off their asses and actually do something.

Arriving back at the museum, the Blackhawks find that the painting is missing, replaced with a rather long letter that requires at least 2 Blackhawks to read in its entirety. The anonymous art thief claims that he is using the painting to get revenge, and he will continue to inflict damage on it at regular intervals until Blackhawk is dead. He will then begin to do the same for each team member until they are all dead. And to prove he's serious, he gives Blackhawk an ankle sprain.

This is really one of the worst revenge schemes ever.

Clues left in the note lead the team to research their archives in order to find information on this mysterious "Avenger." So, they strip down to their undershirts, grab some milk, and buckle in for a long night of reading. 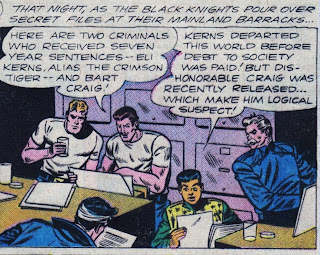 Andre and Chop-Chop manage to figure out that the perp is one "Bart Craig," while Olaf and Hendrickson pretend that they know how to read English.

Craig, however, had never committed any painting-related crimes before, so Blackhawk deduces that he must have gained his special powers while in prison.

The story next cuts to the state prison, where Bart Craig is being returned to his former cell. 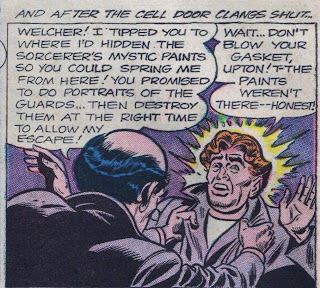 Craig's cellmate, Upton, spills the beans on the magic paint, and "Craig" reveals himself to be Chuck in disguise, who then coldcocks the prisoner for good measure. As we have seen in the first story, this is like a hobby for Chuck. 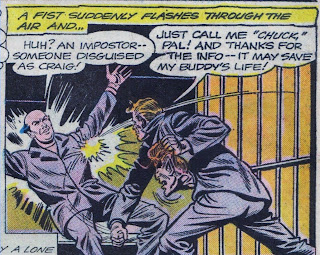 The team finds Craig's hideout, and all 7 of them--including the gimpy Blackhawk--"sneak" in to the house.

True Blackhawk Fact: None of the Blackhawks' missions actually requires seven people. In this respect, they are the comic equivalent of Teamsters.

While the rest of the team breaks in to Craig's studio, Andre hangs back to play with some paint, since he can't really resist when the muse strikes him. Craig threatens to destroy the portrait once and for all, but he suddenly loses his balance. 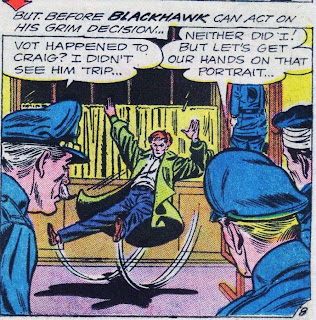 The team quickly dogpiles him, and Andre walks in with his latest masterpiece: a painting of Bart Craig. 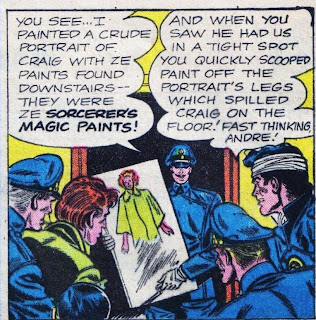 Here are, however, a couple of things I don't understand. First, how did Andre, who stayed downstairs while the others attacked the studio, know what Craig would be wearing? Second, when Andre erased the portrait's legs, why didn't Craig's legs just fall off? I have to call bullshit on this.

Then, Andre freaks everyone out by wiping Blackhawk's portrait clean. 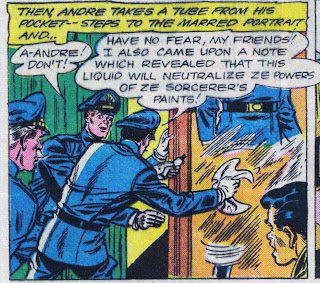 But, much to everyone's surprise as well, Andre actually knows what he's doing.

So, that concludes the third story from Blackhawk 187. In just one issue, I think we get a pretty good sense of how this series is going to go. Out of 27 pages of story, there are only about 3 panels that involve any kind of flying. But there were 12 "Sacres!", 7 "Ach du Liebers!", and 5 "Py Yiminys!"

I haven't decided on the next issue yet, but it will probably be the next one in my collection, unless I decide to jump around a bit. Meanwhile, Blackhawk is making a bit of a resurgence in the DC Universe. He's currently appearing in the Final Crisis Aftermath: Escape miniseries; the team is joining with the Flash in next month's Brave and the Bold; and he will show up in an upcoming Batman: Confidential arc, titled "Blackhawk Down." These appearances will also be getting some coverage here in Blackhawk Wingsdays.
Posted by Dr. K at 10:34 AM

When Uncle Chuck was in college, their policy was all artwork donated was required to be displayed. That might have changed after his six-foot Elvis on velvet contribution.

As a Frenchman, Andre has an instinctive understanding of fine art. For similar reasons, he's also the Blackhawks' go-to guy when it comes to crimes involving wine and soft cheeses.

Is Blackhawk really in FC: Escape, or has Nemesis been halluncinating the whole series? At this point, I'm not sure Nemesis is even in this comic...