The Gil Kane Punch of the Week 21

In going through the process of archiving the various iterations of the Gil Kane Punch, I have so far neglected his work in the Western genre. Kane had some great success in the 50s, after the general decline in popularity of superhero comics, in drawing Western comics, especially for DC. He proved late in his career that he could still knock out a great Western tale with this Two-Gun Kid story, "Just Deserts," from Marvel Comics Presents 116 (1992), written by Dan Slott, with pencils and inks by Kane. 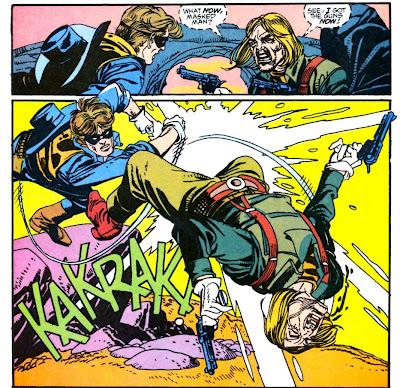 Thanks go out to Bully, the Little Stuffed Bull, for tracking down this scan for me!
Posted by Dr. K at 10:30 AM

Still, it IS very nice.