Following "Comes a Warrior" in House of Mystery 180, readers were treated to a second Gil Kane story, which seemed to be commenting on the previous one. "His Name Is ... Kane!" written by Mike Friedrich and inked by Wally Wood, tells the story of an egotistical comic artist named "Gil Kane," who is too good for the work he is given, and to punish his hubris, he is pulled into his own art!

Kane often drew himself into his stories, especially Silver Age Green Lantern and Atom stories, where Kane would suddenly appear at his drawing board, giving the reader some information during a pause from the action. Here, though, he's clearly letting the piss get taken out of himself for this story. 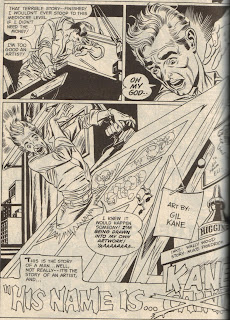 There's a nice little detail on the splash page, where, in the background, we can see a signed portrait on the wall that reads, "To Gil From Eli." Of course, "Eli Katz" was Gil Kane's real name, so the implication here is that he signed this portrait to himself.

Kane is sucked in to his own story, where he has to do battle with some of the crazy beasts he's created, including what looks like the dragon from the previous story. However, he grabs onto Rangarry's sword and battles the beasts on his own. And while Kane does draw himself as one of his signature screaming floating heads, he does not draw himself delivering a patented Gil Kane Punch, which is the one disappointment in this otherwise awesome story.

The story then flashes back to an earlier time, where editor Joe Orlando is chastising Kane for being late 13 times in a row.

Kane's complaints about his inkers may have been based on real events, as Kane was never very happy with the inkers he had while working for DC in the Silver Age, including Sid Greene and Vince Colletta. However, I can't imagine Kane was dissatisfied with Wally Wood's inks on this or the previous story, as Wood's inks complemented Kane's pencils better than any other inker but himself. And this reference to Kane making it big as a publisher references Kane's failed attempt at self-publishing the previous year, the the awesome comic magazine His Name Is ... Savage! (hence, this story's title as well).

Looking to get away from these harrassing phone calls, Kane finds a quiet place to work at the House of Mystery, where the host, Cain, has a studio already set up for him.

However, Kane can't even find any peace here. as Orlando tracks him down, and they have it out. 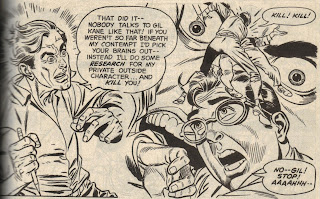 I particularly love this reference to Kane's "research for [his] private outside character"--the hyperviolent Savage--which leads Kane to kill Orlando and dispose of the body, causing him to get further behind on his deadlines.

Kane wakes up from an exhausted nap at his drawing board to find a team of small, balding assistants working independently on his art.

(I'm thinking that these miniature assistants are meant to look like DC publisher and former Kane studio-mate Carmine Infantino, but I may be wrong here.)

The artist is then sucked into the page, where he faces a new set of demons, who look a bit like Joe Orlando and Mike Friedrich. 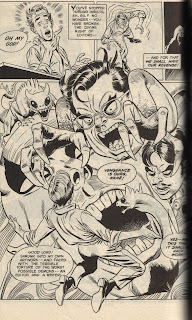 The story ends with Cain entering the studio and finding it empty. Left on the drawing board, however, is an awesome piece of Gil Kane original art, which Cain quickly frames and hangs on the wall, trapping Kane beneath the glass forever!

I've always wondered what the story is behind this story. Kane had to have a good sense of humor to participate in this, yet a lot of the digs at him seem pretty genuine. In a late interview that Gil Kane did with Gary Groth for Comics Journal, Kane suggests that this story, titla and all, was written before he was signed on as artist, but I find it hard to believe that Joe Orlando would have gone with a different artist on it. Still, if anyone out there knows any more about the genesis of this story, I'd be interested in hearing about it.
Posted by Dr. K at 9:03 PM

brilliant. one of my all-time favourite Kane stories, and I DO like me some Gil Kane. if you're at all interested, fella, you'll find both Once A Warrior and His Name Is. . .Kane right here:

Ah! This is from the era in which Kane's artwork was definitely at its best. His figures were all over the place and seemed to be in constant movement. It was BRILLIANT. Thanks for sharing this!