During the Halloween Countdown, I'm going to change up the Gil Kane Punch feature. Instead of just showing a specific punch, I'm going to cover a horror comic that Gil Kane drew. And often, these don't involve punching, but they are still awesome.

The tale opens in the mythical kingdom of Karinek, where four young herdsmen named Dikon, Jalk, Adro, and Wark are lazing about in a field while their cattle roam free. Suddenly, the cattle are all killed by a frightening, serpent-like creature known as a Basilisk, which has the ability to kill with its gaze. 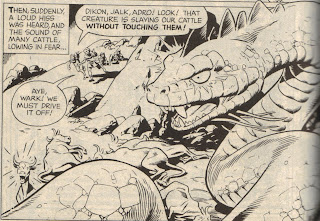 Three of the stupidly named characters are killed by the Basilisk, while Jalk gets away to warn the rest of the kingdom of the serpent's attack.

The creature terrorizes the town to the point that the king, Lundru, consults his "chief wise man," Canthros (Jesus, I hate these stupid fantasy names). Canthros explains to the king that, while he may have 99 problems, the Basilisk ain't one. 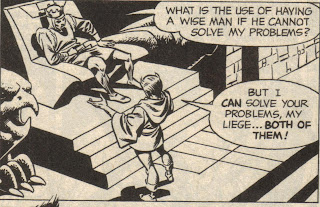 Actually, the Basilisk is one of only two problems the king apparently has, the other being an unmarried daughter, Princess Adeen. Canthos explains that Lundru can kill two birds with one stone: offer the princess as the prize for defeating the Basilisk. Coincidentally, this is exactly how I solved a landscaping problem I had earlier this summer.

Word gets out that any man who kills the Basilisk will score a hot princess, so a bunch of douchebags give it a shot, and they all fail. 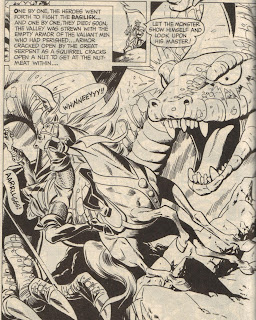 Eventually, word of the challenge gets to "Dursus the Clever" and his brother, "Ulfar the Afflicted." It sucks enough being the brother of Dursus the Clever, but then to be stuck with the epigram "the Afflicted," especially when no one goes on to explain what the affliction actually is. It leaves too much to the imagination.

Dursus decides that all the other men failed because they weren't clever enough, and he devises a plan where he will use a polished shield to serve as a mirror, so he doesn't have to look directly into the Basilisk's eyes.

This plan does not work at all. 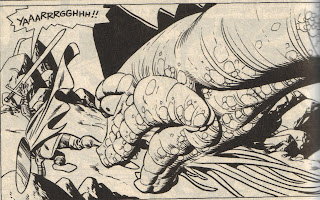 So, who's the clever one now?

Ulfar is stricken with grief at the loss of his no-longer-clever brother, and he decides to take on the Basilisk in order to get revenge, despite the "affliction." Ulfar then uses a mirror to shine in the Basilisk's eyes, thus turning the deadly gaze back on the creature.

The Basilisk dies, and as promised, Ulfar gets the hand of Princess Adeen. Adeen is excited because Ulfar turns out to be pretty hot himself. He then goes on to explain why he was especially suited to defeating the creature, which gives us the story's ironic twist: 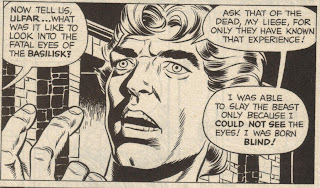 But seriously, Wally Wood's tight inks on Gil Kane's pencils are just fantastic here, and the Basilisk itself looks pretty awesome. Kane did a lot of work for the DC mystery titles in the late 60s and early 70s, even though the bulk of his work at the time was done for Marvel. We'll be picking up some more of these great stories in the coming weeks.

See, my idea was that the king should've married his daughter to the basilisk, giving it a vested interest in keeping the kingdom in one piece.

Obviously, this is why I'm not a king.