"Second Choice," written by Gerry Conway, pencilled by Gil Kane, and inked by Neal Adams for House of Secrets 85 (April-May 1970), contains one of the rare instances of a Gil Kane punch in one of DC's horror titles of the 70s. And, in addition to having the odd combination of Kane inked by Neal Adams, it also features another signature Kane image: the crazy floating head! 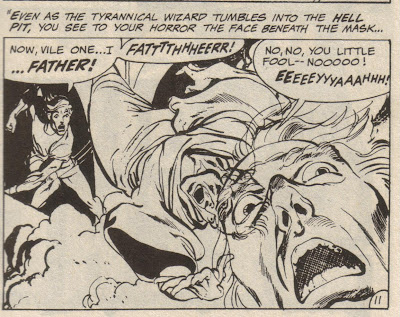 "Second Choice" is very similar to the first two Gil Kane stories I covered during this Halloween Countdown: a young man tries to free a village from an oppressive threat. In this case, young Henry Lansbury, in the year 989, hopes to free his village from an evil wizard's control. Years before, his father had attempted the same quest and never returned. The story's twist, however, is that Abel, the host of House of Secrets, tells the story in two different ways. In the first, Henry takes an indirect approach, enlisting the help of a rival wizard and bringing about his village's freedom. In the second version, Henry takes a slightly different route, going after the wizard in single combat. Henry wins, but as we see in the above image, he discovers here that the wizard is really his father, but only after he punches dad into a hell pit. Henry then sees how his father defeated the original wizard but was tempted to take on his power and continue the roll. Now, young Henry makes the same choice his father made.

While Neal Adams inking anybody always seems like an odd combination to me, as I'm more used to Adams as a penciller, he and Kane complement each other well here, as both were exceptionally dynamic artists.

Next week, we resume our regular Gil Kane punch feature!
Posted by Dr. K at 12:26 PM

AND an up-the-nose shot, another Kane favourite.