I had a completely different plan for today's post--to review the 1973 film Nightmare Honeymoon--but the film was terrible in a way that isn't even fun to write about. It was a real test of audience endurance, sort of like a Michael Haneke film, but without the skill.

So, instead, I'm just going to give you the trailer for Tbe 27th Day. This sci-fi film has a great high concept: aliens give various humans from different cultures the power (in the form of three capsules) to destroy the world collectively. 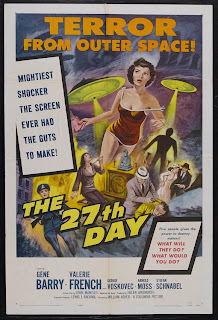 However, despite that tantalizing concept, the execution is somewhat lacking, even with the presence of the great Gene Barry. There are some effective moments, as when some of the recipients decide what to do with their capsules, but for the most part, the low budget hinders exploring the film's moral and political conflicts to their fullest potential. Nonetheless, it is the kind of plot that makes for an effective trailer.