I first wanted to let readers know that it will be a few days before I update with the next Exile on Main St. annotation, but after that, I hope to do them fairly regularly. Also, I want to take this time to make a few announcements.

I recently got my contributor's copy of Encyclopedia of Comic Books and Graphic Novels, edited by M. Keith Booker, from Greenwood Press.

So, if you want to find out what I have to say about Black Condor, Richie Rich, Hellblazer, Marv Wolfman, and/or Gil Kane (beyond what I already have said about Kane in this blog), then you can stop by your local library and check it out. Or, if you've got $144 to burn, you can buy yourself a set on Amazon.

Here's a taste of what I had to say about Richie Rich:

Covers to Richie Rich comics usually depict the boy using money for purposes other than currency: he carpets his floor and decorates his walls with it, he plays in piles of bills, and dollar signs often appear in his presence. Covers also depict Richie treating other signs of wealth, like gold, jewels, and oil, as playthings. 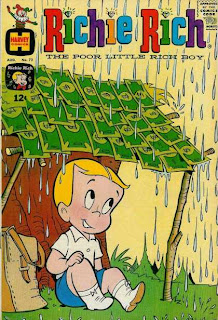 And despite my hatred of Richie Rich, the entry is completely objective.

And speaking of things to which I'm contributing, The Bureau Chiefs site continues to feature my regular essays on cult movies, so if you're disappointed with the paucity of content here, you might want to check that site out. Also, you can now buy Fake AP Stylebook merchandise straight from the Bureau Chiefs at our Zazzle store.

Finally, in less than a couple of weeks, I'll be heading to HeroesCon in Charlotte with my good friend Chris Sims. I might have some Bureau Chiefs stuff to give away there, so if you want some, stop me and say, "Hi!" Or say "Hi!" even if you don't want anything. I also may be spending some time hanging out at the Action Age Comics table with Chris and the gang there.
Posted by Dr. K at 3:20 PM No comments:

The Annotated Exile: Rocks Off 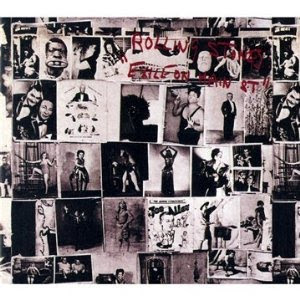 The Rolling Stones' classic 1972 album Exile on Main Street has long been one of my favorite records--one which I've purchased in various formats over the years. So, it was with some excitement that I anticipated this week's release of the newly remastered reissue of the album, complete with outtakes and alternative versions.

While listening to this album with "fresh ears" if you will, I realized that it is heavily laden with allusions and references that contemporary audiences may not get. As a scholar, I decided that it could be useful to annotate the lyrics to these songs in hopes that younger listeners might get a better feel for the nuances of this music.

So, starting here, I'm going to go song by song through the album and provide explanation for the nuances, allusions, references, and other literary elements of these songs and their lyrics.

Also, I feel like this should be a collaborative process, as I'm certain I don't know every reference in these songs. Therefore, please feel free to add any annotations that you would like in the comments.

I hear you talking when I'm on the street,
Your mouth don't move but I can hear you speak.(2)
What's the matter with the boy?
He don't come around no more,
Is he checking out for sure?
Is he gonna close the door on me? (3)

I'm always hearing voices on the street, (4)
I want to shout, but I can't hardly speak.

I'm zipping through the days at lightning speed.
Plug in, flush out and fire the fuckin' feed.(8)
Heading for the overload,
Splattered on the dirty road,
Kick me like you've kicked before,
I can't even feel the pain no more.(9)

Feel so hypnotized, can't describe the scene.(10)
Its all mesmerized all that inside me.
The sunshine bores the daylights out of me.(11)
Chasing shadows moonlight mystery.
Headed for the overload,
Splattered on the dirty road,
Kick me like you've kicked before,
I can't even feel the pain no more.

(1) The title of this song has two meanings. One is a colloquial expression for getting high on drugs, the other is a euphemism for achieving sexual climax. Both meanings will come into play over the course of the song.

(2) I don't think it would be correct to assume here that the speaker has psychic powers.

(3) The "boy" here might be a drug dealer. Drug use features prominently in this song.

(4) Again, the speaker hears voices, but it's probably not some kind of psychic phenomenon. It may have to do with the drugs he is taking.

(5) Mick Jagger has had a lot of sex, often with dancers.

(6) According to Wikipedia, a pirouette is "A controlled turn on one leg, starting with one or both legs in plié and rising onto demi-pointe (usually for men) or pointe (usually for women). The non-supporting leg can be held in retiré position, or in attitude, arabesque level or second position. The pirouette may return to the starting position or finish in arabesque or attitude positions, or proceed otherwise. A pirouette is most often en dehors turning outwards toward the back leg, but can also be en dedans turning inwards toward the front leg. Although ballet pirouettes are performed with the hips and legs rotated outward ('turned out'), it is common to see them performed with an inward rotation ('parallel') in other genres of dance, such as jazz and modern." (There is also an equestrian move called a pirouette, but I don't think Mick means that here, though I wouldn't put it past him.)

The way Wikipedia describes that ballet move, I'm not quite sure how spinning on one leg on top of Mick Jagger would bring a dancer to orgasm. It just doesn't seem physically possible. However, I would also concede that Mick has probably done many things that would seem physically impossible to me.

(7) I'm not sure exactly what this means. It may mean that Mick can only achieve orgasm through nocturnal emissions. I just don't think that's true.

(8) This may be another drug reference, like drugs taken with a hypodermic needle. Or it might refer to an electric guitar or a television. I was only 3 years old in 1972, so I'm not really sure how televisions worked back then.

(9) The fact that he can't feel any pain anymore is the result of taking too many drugs.

(10) If you listen to the song, it gets kind of trippy at this point, as if trying to mimic the experience of being on drugs.