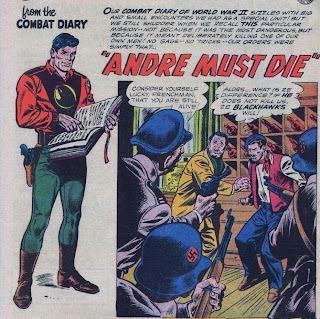 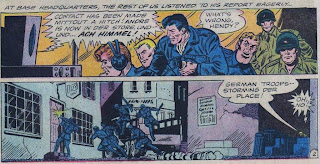 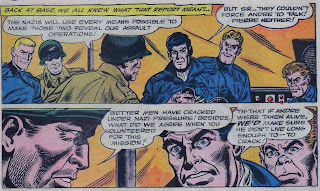 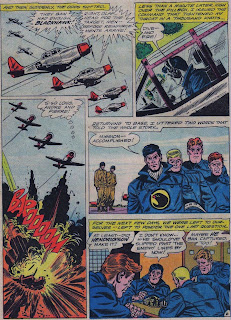 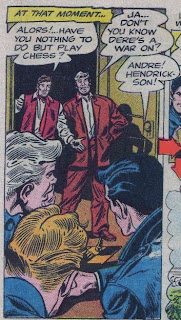 The Gil Kane Punch of the Week 38: All-Request Punch!

In the comments for last week's punch, faithful reader Sea-of-Green made a special request for more Gil Kane Spider-Man punches. And since I desperately want to retain what remaining readers I have, I feel that I need to honor such requests when they come my way.

Unfortunately, I thought I had tapped out the Spider-Man punches I had with this classic, frequently reprinted one from "The Death of Gwen Stacy." However, in going through the trade collection of that story, I came across this flashback panel, from Amazing Spider-Man 96, "--And Now, the Goblin!" written by Stan Lee and inked by John Romita Sr.: 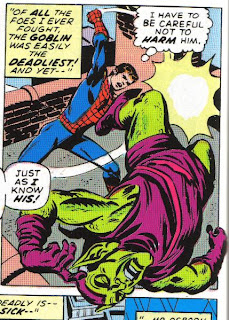 It's a little disappointing that, in this classic story, Gil Kane only included two signature punches, though the later one linked to above is pretty epic. However, this story is loaded with Gil Kane Crazy Floating Heads, so when I get to that feature after the punches run out, you'll be seeing a lot of sweaty, stoned Harry Osborn with pills and heads floating around him.
Posted by Dr. K at 11:55 PM 1 comment:

The Gil Kane Punch of the Week 37: The Good Old One, Two, Three!

Since I've been going to the Green Lantern well a little too often, I decided to switch things up and use a Robin panel, this from "My Place in the Sun," in Detective Comics 402 (Aug. 1970; rpt. in Showcase Presents Robin the Boy Wonder vol. 1), written by Mike Friedrich and inked by Vince Colletta: 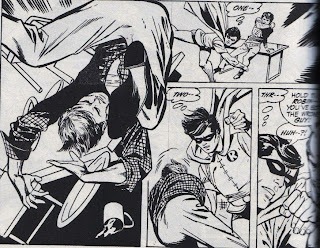 It turns out, Robin punches the wrong guy, leading the Boy Wonder to undergo some deep soul searching:

This panel proves that college kids haven't changed that much since 1970. Heck, my students are still talking about Law and Order, though they prefer NCIS for some reason.

The last panel also demonstrates yet another Gil Kane signature technique: the floating head montage. When I run out of Gil Kane punches, which hopefully will be never, I'm going to switch this series to "The Gil Kane Floating Heads of the Week."
Posted by Dr. K at 3:32 PM 4 comments:

Over on The Bureau Chiefs' site, I've written the first in my series of cult movie essays, this one on the 1966 film The Oscar, just in time for Sunday's Academy Awards Ceremony. 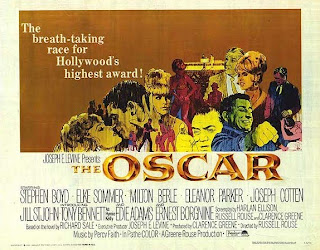 I love the hell out of this movie in all its glorious badness.

Also, you can find The Bureau Chiefs' Oscar Pool on the site as well. You can see how my picks match up with a few other Bureau Chiefs, along with a random dice roll from a d6. If the d6 wins, I'm going to be pissed.

Then, on Sunday night, some of the Bureau Chiefs are going to live chat the Oscars, so you can follow along with the ceremony. I'm looking forward to that, even though I may be totally embarrassed by my picks this year (last year, I went a respectable 18/24).

Here are my picks for this year.

Performance by an Actor in a Leading Role: Jeff Bridges, Crazy Heart

Performance by an Actor in a Supporting Role: Christoph Waltz, Inglourious Basterds

Performance by and Actress in a Leading Role: Sandra Bullock, The Blind Side

Performance by and Actress in a Supporting Role: Mo’Nique, Precious

Adapted Screenplay: Up in the Air

I would like to be wrong about Avatar winning Best Picture, as I liked The Hurt Locker much better. However, my pick here is based on how I think the new Best Picture voting system is going to work out, as I feel that it will really mess with predictions.
Posted by Dr. K at 1:48 PM No comments: 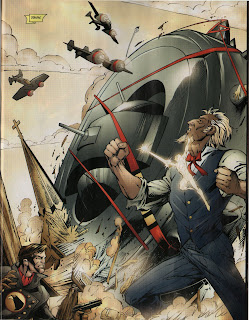 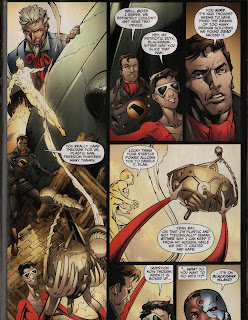 This issue, number 42, also marks the last issue I'm buying of Justice League, after continuously following JLA series in various incarnations for more than 25 years. I've been making a concerted effort lately to stop buying certain series purely out of habit, especially ones that I just haven't enjoyed in quite a while. However, after I made this decision, I feel like this issue is saying to me, "Don't go, Doctor K! We promise we'll be better! See! Here are the Blackhawks--isn't this exactly what you want?" But unfortunately, it's too late (though I do love the War Wheel).
Posted by Dr. K at 3:26 PM 1 comment:

The Gil Kane Punch of the Week 36: A Veritable Barrage of Blows! 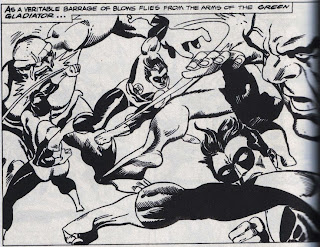