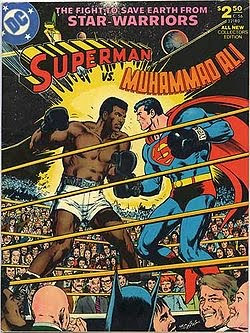 On a personal note, about 10 years ago or so, I was walking through the lobby of a hotel in Louisville, when I saw Ali standing with a group of people. He looked over at me, so I gave him a "Hey, Champ." He then lifted up his fists a few inches and gave me a nod. I just about lost it right there.
Posted by Dr. K at 5:21 PM 11 comments:

This Makes Me Want the Flu

The other day, one of my nephews, who is somewhere between the ages of 3 and 12 (I really don't pay attention to the ages of my nieces and nephews, except when they turn 21 and can start buying their own alcohol) said to his mother during dinner, "This food makes me want the flu."

Now, his mother immediately took this to mean something like, "This food makes me nauseous," or "This makes me feel like throwing up," but I took it to mean something more than that. I think that, in an effort to see himself in relation to the world around him, he developed a rather sophisticated standard for evaluation. Rather than meaning, "I want to throw up," he was actually saying, I would argue, "If given a choice between eating this food and having the flu, I would rather have the flu."

I immediately saw the appeal of this system. "You know what?" I said, "Two and a Half Men makes me want the flu." And then I started to run through my head all the things I don't like, trying to determine if I would rather have the flu than be exposed to them again. FOX News, The Eagles, Katy Perry, Outsourced, most of CBS's Monday night comedy line-up with the exception of How I Met Your Mother, Michele Bachmann, Jim DeMint, brussel sprouts, Joe Buck calling the World Series--all of these things make me want the flu.

But then I realized there are things that I don't really care for, but if given a choice, they were all preferable to the flu. Billy Joel, the Confessional poets, Norah Jones, broccoli, Adam Sandler comedies (with the exception of Now I Pronounce You Chuck and Larry, which makes me want the flu and thensome), Tim McCarver calling the World Series--none of these things rose to the level where being sick was preferable to being exposed to them. And that made me feel a little more tolerant of those things that I don't like, but can live with.

So, I'm grateful to my young nephew for introducing me to this sophisticated and truly helpful system for evaluating the world around me, which helps me break the simple binary of "I like this/I don't like that" to provide a more nuanced judgment. I hope that everyone will pick this phrase up and use it when they feel it's appropriate. I know I'm going to start using it every day.

And this leads to my final question: what makes you want the flu?
Posted by Dr. K at 10:52 AM 4 comments: