Will Eisner and the "Graphic Novel"

I recently returned from a trip to the Billy Ireland Cartoon Library at the Ohio State University, where I went to examine the library's Will Eisner Collection, which contains, among other things, letters, original art, and most of Eisner's publications over his long career. While there, I found what is, as far as I can tell, a previously undocumented source that sheds some light on how Will Eisner arrived at the term "graphic novel" to describe his 1978 work, A Contract with God.

First, some background: Bob Andelman, in the biography Will Eisner: A Spirited Life, describes the scene where, in 1978, Will Eisner tried to pitch his book, A Contract with God, to Bantam Books.

Eisner called up Oscar Dystel, then president of Bantam Books, and pitched the concept. Dystel not only knew Eisner but was said to be a fan of his work on The Spirit. Dystel remembered him, but he was a busy man, as publishers usually are, and he was impatient. He wanted to know what it was that Eisner had, exactly. Eisner looked down at the dummy, and an instinct told him, Don’t tell Dystel it’s a comic book or he will hang up on you.

So Eisner thought for a moment, and said, “It’s a graphic novel.”

As the story goes, Dystel ended up rejecting the work once he saw it and determined that it was a comic book. But this story, repeated frequently by Eisner and his biographers (Michael Schumacher repeats it on pages 200-01 of his recent biography, Will Eisner: A Dreamer’s Life in Comics), is cited as the point, in a fit of sudden and desperate inspiration, where Eisner first came up with the term “graphic novel” to describe A Contract with God. 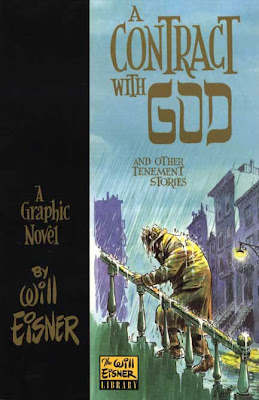 It is now fairly common knowledge that Eisner neither invented the term itself nor the form that we call a “graphic novel,” but it is fair to say that he popularized the term when he later used it to promote the book upon publication from Baronet Books in 1978, and, for better or worse, the term has stuck.

However, for some time after, Eisner was credited as the “inventor” of the graphic novel and the first to use the term. Even as late as 2003, Stephen Weiner wrote in Faster than a Speeding Bullet: The Rise of the Graphic Novel,

“The first modern ‘graphic novel’ was written and illustrated by veteran cartoonist Will Eisner, who coined the term while trying to persuade the editors at Bantam Books to publish the book-length comic book” (17).

There are, of course, a few contentious points in this statement, leaving aside the point that A Contract with God is a series of short stories, rather than a novel per se. First, it is well known that Eisner did not “coin” the term. In North America, the term “graphic novel” has been traced back to fanzine writer Richard Kyle, who first used it in November 1964, and the term later appears on the dust jacket of George Metzger’s 1976 work, Beyond Time and Again, as well as Richard Corben’s Bloodstar and Jim Steranko’s Chandler that same year.

Also, several earlier works that could now be described as “graphic novels” precede the publication of A Contract with God in North America, in addition to the ones mentioned above, and, therefore, make it difficult for one to call that work “the first modern ‘graphic novel.’” This is by no means an inclusive list, but Gil Kane and Archie Goodwin’s His Name Is … Savage (1968) and Blackmark (1971) and Arnold Drake, Leslie Waller, Ray Orsin, and Matt Baker’s It Rhymes with Lust (1950) all fit most formal definitions of “graphic novel,” and those alone are enough to call into question the statement that Eisner’s was the first modern one. However, such claims persisted even beyond the point that comics historians had proved them wrong.

Later in life, Eisner did admit that he was not the first to come up with the term, as Schumacher quotes:

”I thought I had invented the term,” Eisner admitted, “but I discovered later that some guy [probably Kyle] thought about it a few years before I used the term. He had never used it successfully and had never intended it in the way I did, which was to develop what I believe was viable literature in this medium” (201).

And this has become the accepted story of how Eisner arrived at the term independently, and how he managed to begin popularizing it around 1978, with the publication of A Contract with God. Yet no one has found a connection between these earlier uses of the term "graphic novel" and Eisner's own use of the term.

At the Billy Ireland Cartoon Library and Museum, I read through Eisner’s surviving letters, including business correspondences and fan mail from around 1963 to the late 70s and early 80s, mainly doing research on my larger project on race and comics. About 90% of the fan mail consists of requests for sketches and original art, accompanied by Eisner’s polite refusal (most of the time-he did provide sketches and prints on some special occasions). Therefore, while there was a high volume of fan mail during this period, much of it was very easy to move through quickly.

One of the qualities that struck me in Eisner’s correspondences, though, was how generous, encouraging, and detailed he was in the critiques he provided to up-and-coming comics pros who sent their early work to him. 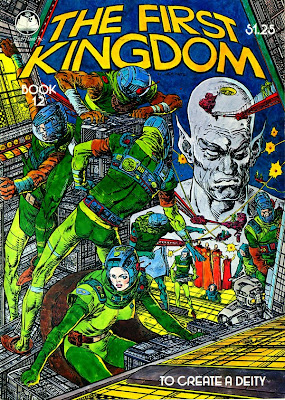 One such pro was Jack Katz (often cited as the creator of one of the precursors to the graphic novel) who began a correspondence with Eisner in August 1974, with the inclusion the first book of Katz’s epic fantasy series The First Kingdom. In his introductory letter, dated Aug. 7, 1974, Katz writes,

Here is the first book of a series of 24 books which it will take to complete the epic. … What I am starting is a graphic novel in which every incident is illustrated.

Katz goes on to explain the plot and themes of the entire epic at length, and he thanks Eisner for his continuing inspiration.

On August 26, 1974, Eisner responds in his typical polite and encouraging fashion:

My compliments to you on an imaginative piece of work. There is strength, drama and great picture value.

I’m particularly impressed with the enormity of your undertaking. It is efforts like this that move the standards of our art form upward. (The Ohio State University Billy Ireland Cartoon Library & Museum, The Will Eisner Collection, Box WEE1, Folder 22)

The correspondence between Eisner and Katz went on for many years, at least to the end of the Eisner letters that OSU has collected, which is about 1978. In all, exchanges survive through January of 1978, in which Katz sends Eisner book 7 of The First Kingdom. Throughout these exchanges, Eisner is detailed in his praise and critiques of Katz’s work, citing in particular the improvement of Katz’s inking skills from the first book on, and continued recommendations for Katz to work on integrating images and text better (anyone who has ever read The First Kingdom will know that this is sound advice). Eisner, in fact, frequently refers back to earlier letters to note this progress, and he often cites how Katz’s project renews his faith in the progress of the comics form. Notably, it is during the latter part of these correspondences that Eisner is generating the idea for and composing his first graphic novel, A Contract with God.

Now, I want to resist speculating too hard on what all this really means, but it is safe to say, at least, that Eisner was introduced to the term “graphic novel” by Jack Katz in 1974, and Eisner exhibited a clear memory of their exchanges over the course of four years, up to the composition of A Contract with God. Some kind of cross-pollination between Eisner and Katz is likely here.

Beyond that, what can we say? Did Eisner recall that first letter from Katz while under pressure to come up with some descriptive term for Bantam? Or did the term just float through his transom at that point in 1974, only to emerge on its own again in 1978 with no connection to its past use? We probably won’t find answers to those questions, but the latter may be the most likely scenario. I would hesitate to conclude that Eisner’s use of the term and subsequent failure to credit Katz with introducing him to it constitute some kind of willful omission on Eisner’s part (though, as Ken Quattro's recent discovery reveals, Eisner was prone to a kind of historical revisionism that tended to place him in a better light than the historical evidence would otherwise prove).

But what remains is still useful: we now know Eisner’s earliest known exposure to the term “graphic novel,” which at least provides an addendum to the oft-repeated story of how he came to use the term to describe A Contract with God. And, therefore, the accepted wisdom of that story needs to be revised.

One of the reasons why I created this blog several years ago was because I wanted a venue for more fun, informal writing than the normal academic writing I was doing would allow (not to say that academic writing isn’t fun—it’s just a different kind of fun). That is, I would use this blog to exercise my excitement and enthusiasm as a comics fan, and, therefore, keep it separate from my academic writing.

For the past few months or more, however, I have let the blog slide as my opportunities to write and publish scholarship have increased, and these opportunities will see fruition in the coming year. At times, though, my academic interests have dovetailed with the blog writing. For example, the still-popular Chop-Chop posts and Blackhawk Wingsdays came at the beginning of my research on a larger project about race and comics, on which my efforts are now mostly focused. And the Gil Kane Punch of the Week, which I need to get back to, came about while I was researching the Gil Kane entry that I wrote for Greenwood Press’s Encyclopedia of Comic Books and Graphic Novels.

One of the things I would like to start doing here, in addition to reviving the more humorous fan writing, is use the blog as a kind of research log, where I document the progress on some of the work I’ve been doing. I hope this will be of interest to at least some readers.

Upcoming, then, will be some essays on that research, including one that I hope to complete today. Please stay tuned.
Posted by Dr. K at 1:07 PM 1 comment: