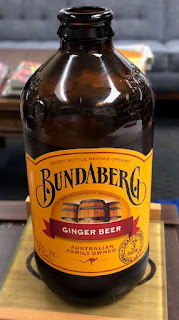 Anyway, I wanted to start out with a positive review. Bundaberg Ginger Beer is good. It has a sweet, pineapple taste and nice chunks. It’s not lemony like Rachel’s, which would push it over the top. It also has a fun bottle with instructions. I would definitely drink this again. 9/10
Posted by Dr. K at 4:21 PM 28 comments:

Here are the rules: I'm going to use a 10-point scale, 10 being Rachel's. Also, I would be glad to hear recommendations. However, don't recommend Vernors; I've tried it, it's crap, and I will not take you seriously. If Rachel's is 10, Vernors is 0. That's the spectrum.
Posted by Dr. K at 4:09 PM 91 comments: