During this period of change in the Blackhawk series, a recurring plot occurs in which one or more of the Blackhawks turns against the rest of the team, usually by being transformed into a monster by an evil scientist. Once again, one really has to question the efficacy of a crime fighting team that spends most of their time either fighting each other or rescuing their leader from deadly peril of their own making. 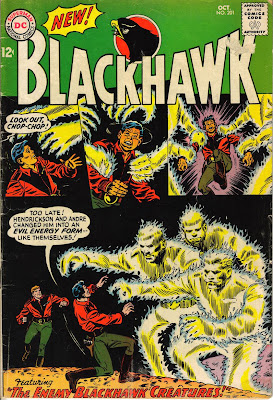 "The Enemy Blackhawk Creatures," from Blackhawk 201, fits this pattern, as the cover shows team members getting transformed into bizarre energy creatures. However, the splash page seems to set up an entirely different story: 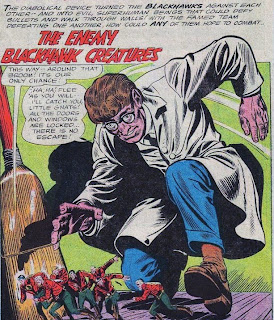 It seems like the writer (and no writer is credited here, but it may have been Arnold Drake, who did much of the writing of the series along with France Herron, until Bob Haney took over a few issues later) couldn't decide if he wanted to do tiny Blackhawks or electrical Blackhawks, and instead put both hands together and combined the two.

The story opens with the Blackhawks chasing after some daring crooks who have just stolen the famed "Pearl of India" from the local museum. Andre manages to tackle one of the thugs before he escapes on a helicopter, but in the ensuing melee, the pearl comes loose:

So, while the crime was foiled, Andre feels bad that he managed to lose the pearl down a drain hole, and he makes a strange wish: he wants to be small so that he could fit down the drain and recover the pearl.

Coincidentally, Andre's request is overheard by Cheech and Chong, who help Andre get small. Actually, it's the famous Professor Milbrook, who has recently been in the news for his unorthodox scientific experiments. He informs Andre that a new device he has invented will help him achieve his desire for shrinking.

Milbank takes Andre to his lab, where he demonstrates the machine on a rabbit. After the first blast of the machine, the bunny becomes a giant electrical rabbit, then another blast turns it into a palm-sized hare. Deciding that absolutely nothing could go wrong with this, Andre volunteers to be the machine's next subject.

It turns out, however, that Professor Milbrook has other plans, and he only exposes Andre to the first blast: 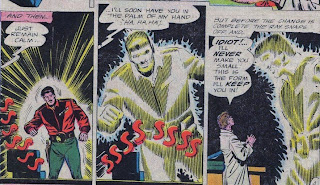 As a mindless creature of pure energy, Andre becomes the professor's slave, and the evil scientist turns the monster on the Blackhawks.

During the ensuing battle, Hendrickson and Chop-Chop are also turned into electrical creatures, and while Blackhawk discovers that the creatures are weakened by water, he and the remaining team members are unable to stop them. That means Blackhawk has to come up with another plan: 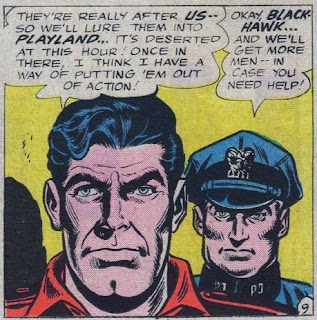 The plan to lure the creatures to "Playland" amusement park turns out to be total crap, as Blackhawk has no idea what to do with the creatures once he's lured them in there. Instead, all the Blackhawks are captured and turned into energy creatures.

Milbrook then reveals a side-effect of his device: the energy creatures will automatically turn small after a certain period of time elapses, so in order to control his new captives, he just makes them small at the same time:

While tiny, the Blackhawks manage to pick up a broom and cold-cock the professor with it, knocking him out cold. They then sneakily turn the device on him. Little Milbrook and Tiny Blackhawk fight, and Milbrook's face is dislodged, revealing that he isn't Milbrook after all: 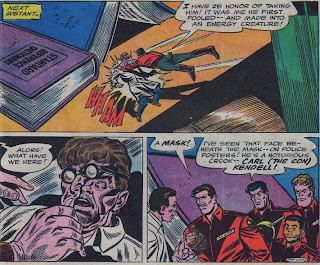 Karl (The Con) Kendell--the criminal with the worst nickname--kidnapped the real Professor Milbrook and used his devices to further his criminal career. In fact, he had set the whole thing up with the pearl thieves in the first place.

As part of Kendell's punishment, he is dropped by string down the drain in order to recover the pearl.

At the end of the story, the Blackhawks seem to want to play with Kendell like a little toy doll for a while before they return him to normal size.
Posted by Dr. K at 10:00 AM