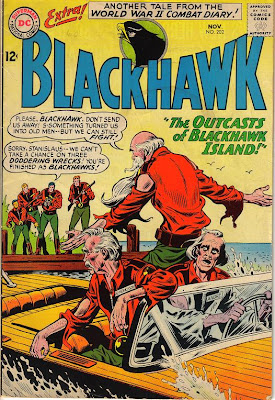 The Blackhawks have fought and defeated (often by accident) many enemies that threaten the peace of the world. However, Blackhawk 202 (Nov. 1964) reveals one enemy that they simply cannot defeat: age descrimination! 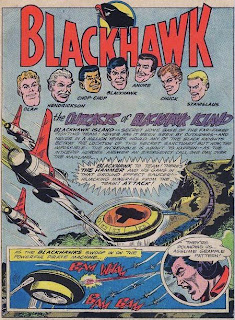 Also in this issue: the Blackhawks actually fly their goddam planes!

I do want to point out, though, that the splash page here is a pants-on-fire liar. As a Blackhawk scholar, I must address this claim that Blackhawk Island has "never been seen by outsiders." In fact, a quick perusal of the Showcase Presents: Blackhawk volume proves that the black knights were letting reporters and others on the island all the time. So, I'm calling bullshit on this.

In this issue, the Blackhawks battle the Hammer, yet another criminal mastermind who uses elaborate machines to commit his crimes, like this giant flying saucer that vacuums up precious minerals.

Though the Blackhawks handily defeat the Hammer's flying saucer, little do they know that the villain has an ulterior motive: he wants to track the team's flight path in order to trace the location of Blackhawk Island.

This is a pretty elaborate plan when he could have just googled "Blackhawk Island location" and gotten the same result.

On the island, the team undergoes some rigorous training, which often results in Hendrickson receiving some ribbing for his age. To prove he's not an old man, Hendy performs a triple gainer and knocks Stan into the water: 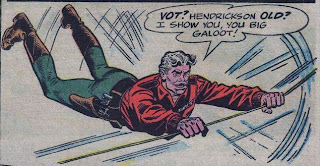 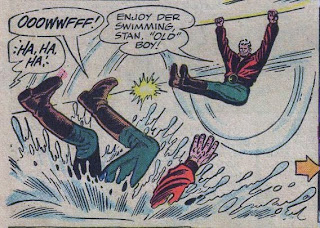 Meanwhile, in a sub off the coast of Blackhawk Island, Hammer launches Operation Methusaleh, which involves some kind of green gas that causes all who come in contact with it to age rapidly.

Right here is where Hammer's plan falls apart, even before it gets started. There is a wide variety of poison gases that Hammer could have used here that would wipe out the Blackhawks instantly and give him total access to this secret, uncharted island. Instead, he has to get all fancy with this bullshit aging gas.

The Blackhawks' system of fans keeps the gas--which they think is just a weird green fog--just off shore. Soon, though, a report comes in of pirate activity, and Blackhawk sends Andre, Hendrickson, and Stan out in the Blackhawk sub in order to investigate. In the process, the trio get exposed to the green gas. Of course, if they had just flown in their planes--which is what the Blackhawks do, after all--this wouldn't be a problem.

The three heroes don't actually find any pirate activity, and so they head back to the island. Soon, though, the exposure to the gas takes effect: 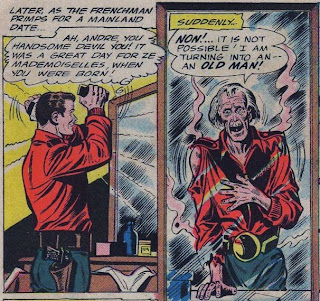 Man, I just love how Andre talks to himself in the mirror. Unfortunately, his pussy-hounding days are over as he turns into a decrepit old man.

The same happens to Hendrickson and Stan as well: 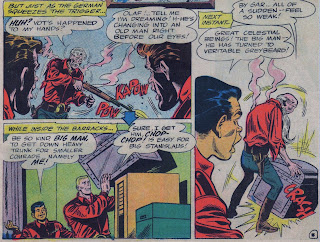 Also, in an odd turn of events, Blackhawk's own right arm becomes withered and old, possibly because Andre touched him there.

You don't want to know what else became withered and old because Andre touched it.

With this turn of events, Blackhawk has no choice but to make a drastic decision that opens him up to a huge age-descrimination lawsuit: the three old men must be fired because the team can't waste resources dragging along some senior citizens. 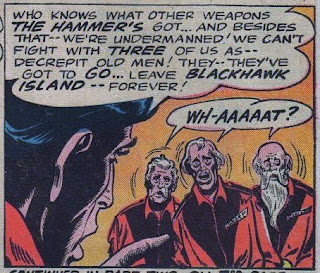 No retirement party, no gold watch--the three seniors are just put in a boat and cast adrift.

This proves to be a huge mistake, as Hammer makes his way onto the island with his various gadgets and has his way with the remaining Blackhawks: 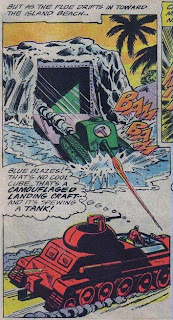 With all the young Blackhawks captured, the three old men return to the island to live out their final days, and since Hammer does not see them as a threat, he lets them do what they want. 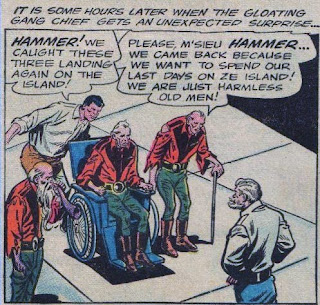 However, even as old men, the Blackhawks shouldn't be counted out. All of the senior citizen paraphernalia turns out to be cleverly hidden weapons. Andre's cane is actually a rifle, and Stan's ear trumpet... 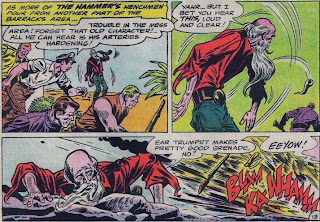 Also, Hendrickson has somehow hidden a giant bazooka in his wheelchair: 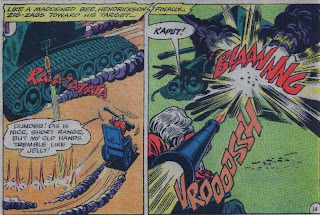 Once Hammer is captured, the Blackhawks have a couple of dilemmas to solve: one, they need to find out how to de-age their teammates, and two, they need to do something about the fact that Hammer and his henchmen know the location of Blackhawk Island.

Luckily, they have a Nazi machine that will take care of both problems:

The story ends without Blackhawk acknowledging that he was wrong to exile Andre, Stan, and Hendrickson just because they are old. In fact, he could have gotten off by just saying, "It was my plan all along to have the three old men return and save us!" And so, the discriminatory labor policies of Blackhawk Island remain intact and unchallenged.

According to the Grand Comics Database, "The Outcasts of Blackhawk Island" was written by Bob Haney, even though he's not credited in the issue itself. Though this story certainly has touches of that patented Bob Haney insanity, I had always thought Haney didn't come on this book until issue 203. I'll have to double-check my records on this.
Posted by Dr. K at 10:01 AM