The Gil Kane Punch of the Week 35: The Finishing Touch!

I know I've been dipping into the Green Lantern well quite a bit over the last few weeks, but I've been fascinated with the evolution of Kane's style that can be traced through the four Showcase Presents Green Lantern volumes. Volume 1 is virtually punchless, and throughout those stories, Green Lantern tends to use his ring as more of a defensive weapon, or his ring constructs are used more to detain bad guys than to knock them out. This pattern holds true through most of volume 2, though we begin to see more punching occuring around issue 28, when writers Gardner Fox and John Broome start creating plots where GL's ring is useless in defeating the villain. With volume 3, the punches start coming hard and fast, and the typical Gil Kane punch becomes a regular part of Kane's repertoire, often appearing multiple times in a single story.

That brings us to Green Lantern 56 (Oct. 1967), written by Gardner Fox and pencilled and inked by Kane, which is the second part of a punchtastic two-parter that brings together the entire Green Lantern Corps. To mix things up a bit, I've chosen a punch not from Hal Jordan, but instead from one of Hal's mentors, Tomar-Re. Here, a winged Tomar-Re knocks out fellow Zudarian, Zoraldo. 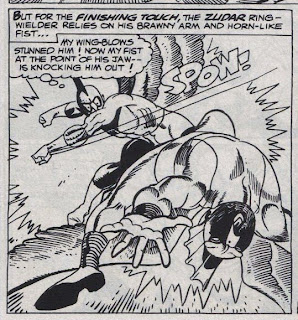 "Now my fist at the point of his jaw--is knocking him out!" Yes, Tomar--on Earth, we refer to that as "a punch." I do like it, though, that Tomar, who is not used to fisticuffs, still leads with his left.
Posted by Dr. K at 6:58 PM

Wouldn't punching a guy in the beak, er, break his beak? It's made out of the same material as fingernails, after all.