The Gil Kane Punch of the Week 32: SKROGG!

Sometimes, I just like to open one of the Showcase Presents: Green Lantern volumes randomly and see if I can land on a page with a Gil Kane punch. The first volume is relatively punchless, perhaps indicating that the historical development of the Gil Kane punch evolved over the course of his Silver Age superhero work. By the time we get to the issues collected in volume 3, however, the punch has clearly become Kane's signature move, and we can find as many as five or six punches per issue.

Case in point: this image from Green Lantern 54, "Menace in the Iron Lung," written by John Broome, with a rare instance of Kane inking his own pencils at this time. 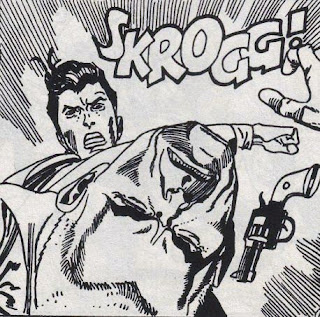 This is, by all means, a pretty standard Gil Kane punch, with Hal Jordan slugging the guard of the titular villain's estate (it does, however, get bonus points for the sound effect, "SKROGG!"). But a quick scan through the issue reveals no fewer than seven typical Gil Kane punches, plus several variations. The plethora of punches in this issue, in fact, makes me realize that a taxonomy of Gil Kane punches is long overdue, and I really need to get to work on that.
Posted by Dr. K at 9:10 AM

I never really cared for Kane doing his own inks. A lot of artists think that they ink their own stuff better than an outside inker would -- but Kane wasn't one of them.