The Gil Kane Punch of the Week 33: Right Makes Might!

A few weeks back, I mentioned that Green Lantern 58 (Jan. 1968), was a pretty punchtastic issue. In "Peril of the Powerless Green Lantern!" written by Gardner Fox and inked by Sid Greene, GL finds he is having strange reactions to his adventures, such as overwhelming fear, greed, and sadistic tendencies toward criminals. For example, he really lays into three common thugs: 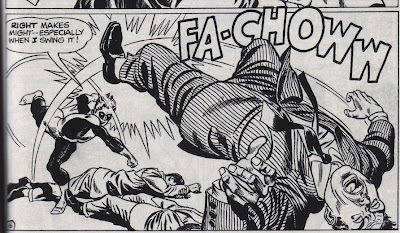 The Guardians diagnose him with combat fatigue and strip him of his ring, but he still has to face some challenges, as detailed in this earlier post.

Also in this issue, a powerless Hal Jordan spends two pages beating the shit out of a bear: 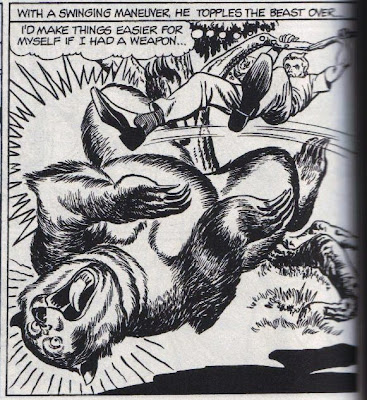 I can tell you right now, that bear does not appreciate the taste of Florsheim.
Posted by Dr. K at 9:43 AM

Man. Hal Jordan beating up a bear. One of those many times I remember just how much I love comic books.

And in the same month I got an undead Punisher throwing a Man-Thing! It's like Christmas again.

This is one of my favorite Hal stories. The whole bit later on with the beehive is just fabulous.

I need to dig up my Gil Kane Micronauts issues. I'll send you any tiny space punches I find there.