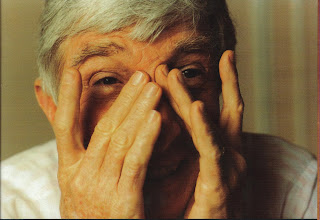 As an undergraduate, I had the good fortune to meet John Updike when he came to my school for a weekend. The English department had a budget of about $6,000 for its writers series, and that money was usually doled out over the course of the year to 5 or 6 writers from the area. My junior year, however, the department decided to blow the whole wad on one writer, and they managed to get Updike.

The department also decided to pick out two English majors who would get to go out to dinner with the author and have some other personal time with him. Because I was a pretty good student, and I cleaned up nice, I was one of the chosen two.

Other than a few short stories, essays, and reviews, however, I had not read much Updike. I managed to find some cheap paperbacks at a used bookstore, and I read what I could in the weeks before his arrival.
> 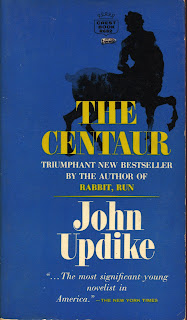 Which turned out not to be much. I read some of The Centaur, all of the memoir Self-Consciousness, more short stories, whatever were his most recent things in The New Yorker, and possibly a few chapters of some other novels.

In preparation for the visit, the English department held a discussion of Updike's work. There was, amongst the faculty, a lot of ambivalence about Updike's fiction, just as there seems to be in the obituaries that have come out today, and for similar reasons: gender, sex, class, etc. The discussion included readings of selected passages from his work, one of which was a sex scene that, in typical Updike fashion, was both unerotic and excessively, almost medically, detailed. (I wish I could remember the source of the passage. It may have been from The Centaur or from Couples.) After hearing the passage, an older gentleman in the audience burst out, "I've had sex many times with many women, and it has never, ever been like that." Though I would never have quite the same basis for comparison, I would recall this reaction every time I came across a sex scene in an Updike novel.

When Updike arrived in town, I was taken, with some faculty, administrators, and the other English major, to dinner with the author. Updike turned out to be unintimidating and personable, focusing a lot of his attention on the two students in the room. I have a picture, which is framed on my office wall, of this dinner: me in a suit that I bought while working at Sears, a huge smile on my face, sitting next to the author. As I remember, I managed not to embarrass myself very much, though I did try to draw too much of a connection between him and me by referencing the fact that both of us had fathers who were teachers.

The next day, I brought my stack of cheap paperbacks for him to sign. He referred to me by name and said, "You really haven't read all these, have you?" I just laughed and didn't give an answer. (Now, in going through my home office looking for my Updike books, I could only find two signed paperbacks. I know I had to have more than that at the time, but I have no idea what happened to the others.)

I also got to spend more time with him before his reading, where I was told by a woman who may have been his agent that I shouldn't bring up The Witches of Eastwick movie with the author. "He's not happy with it?" I asked, and she just shook her head. "Don't bring up Hollywood at all," she added. (And now, it turns out, one of his last works, if not his last, is a sequel to that book.) I was surprised by this directive, as Updike did not seem to be the kind of high-maintenance author who needed such protection, but maybe it was just one of those things that agents do for their clients.

This was my first experience meeting a "big-time author," and it had a profound effect on me, especially since Updike turned out to be such a nice guy. I would later read much more of Updike's work, and for about ten years, I kept up with all his new releases as well. I read Rabbit, Run in my early twenties, which seems now to have been the perfect time for a young white guy to read it (much like reading Catcher in the Rye at 15 or 16). The last novel of his that I really liked, however, was Memories of the Ford Administration, a book that has passages that I remember well and still marvel at their style. One passage in particular I often find myself thinking about and laughing:

Sex still had a good name during the Ford Administration. Betty Ford had been a footloose dancer for Martha Graham and announced at the outset of the administration that she and Gerald intended to keep sleeping in the same bed.... In those years, one-night stands, bathhouses, sex shops abounded. Venereal disease was an easily erased mistake. Syphilis, the clap--no problem. Crabs, the rather cute plague of Sixties crash pads, had moved on as urban rents went up, and herpes' welts and blisters had yet to inflict their intimate sting. The paradise of the flesh was at hand. What had been unthinkable under Eisenhower and racy under Kennedy had become, under Ford, almost compulsory. Except that people were going crazy, as they had in ancient Rome, either from too much sex or from lead in the plumbing. Ford, a former hunk, got to wome in a way Nixon hadn't. Twice, I seem to remember, within a few weeks' time, a female went after him with a gun: Squeaky Fromme was too spaced to pull the trigger, and Sara Jane Moore missed at close range.

For one, I love how this passage encapsulates a nostalgia for an era that otherwise seems so unmemorable. And this, for me, is the thing that Updike did best: fix his eye on a particular time in American culture and articulate a perfect description of it. I think the Rabbit books do this especially well. 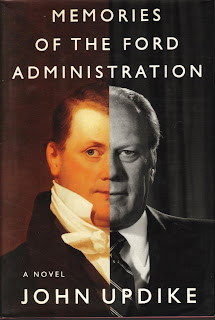 I haven't read Updike in years, with the exception of my annual re-reading of his short story, "A&P," which I teach every year in Freshman Comp. I should probably pick up some of the books I never finished as an undergrad. I noticed that my bookmark is still in my copy of The Centaur--I was using a ticket from a breakfast with the author to mark my page.

In his hilarious and insightful account of his literary admiration for Updike, titled U and I, Nicholson Baker begins by discussing the recent death of Donald Barthelme, and he goes on to write about the way in which a reader's attitude changes after a writer's death:

That phrase which reviewers take such pains to include when delivering their judgments--when they say that among living writers so-and-so is or isn't of the first rank--had once seemed to me unnecessary: the writing, I had thought, was good or bad, no matter whether the writer was here or not. But now, after the news of Barthelme's death, this simple fact of presence or absence, which I had begin to recognize in a small way already, now became the single most important supplemental piece of information I felt I could know about a writer....The intellectual surface we offer to the dead has undergone a subtle change of texture and chemistry; a thousand particulars of delight and fellow-feeling and forbearance begin reformulating themselves the moment they cross the bar.... Posthumously their motives become ludicrously simple, their delights primitive and unvarying: all their emotions wear stage makeup, and we almost never flip their books across the room out of impatience with something they've said. We can't really understand them anymore. Readers of the living are always, whether they know it or not, to some degree seeing the work through the living writer's own eyes; feeling for him when he flubs, folding into their reactions to his early work constant subauditional speculations as to whether the writer himself would at this moment wince or nod with approval at some passage in it. But the dead can't suffer embarrassment by some admission or mistake they have made. We sense their imperviousness and adjust our sympathies accordingly.

I find this assessment particularly appropriate of Updike because he was so prolific and continued to write up until his death. And his work was such a mixed bag. One could read a new Updike novel with the hope that it was a return to form because there had been so many returns over the last 50 years or so. Now, one can go to the obituaries and figure out exactly which works to read and which to avoid, but the hope that the next one might be the best is no longer there.
Posted by Dr. K at 8:49 PM

Nice memorial post, Dr. K. I now feel like I've taken Updike's high standard of excellence for granted for years. He is one of my favorite writers.

Fantastic piece, Dr. K. I'm immensely envious you got to meet the great man, and what a story. Seen too few posts in the blogosphere on Updike's impact other than my own, nice to see another. I'm a huge fan of Ford Administration, too, very underrated work.