The Daily Death of Terry Tremayne

"The Daily Death of Terry Tremayne," written by David V. Reed and drawn by Ernie Chua, still holds up as one of my favorite Batman stories. 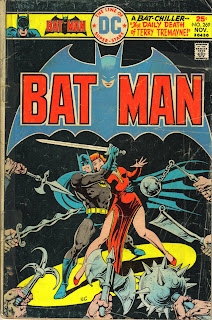 As you can see from this scan of my original copy, this comic is barely held together by tape and a 6-year-old's dreams.

The story opens with the murders of three men named "Terry Tremayne," all killed on successive days. Each was also killed with an exotic weapon, or, as the Gotham police refer to it, a "weirdo shiv": 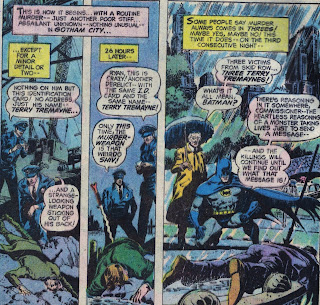 Batman goes on to explain that one of the weapons was a South African Assagai spear, another was a Malay Creese, and the third a Nepalese Gurkha Kukri. And it is here, on the first page, that we get one of the common features of David V. Reed's Batman stories: obscure knowledge that would educate you while you were being entertained.

After some quick investigation, Batman discovers that a 4th Terry Tremayne inhabits Gotham City, and he goes to find him before he becomes the next victim. Turns out, though, that he is a she:

As we can see, Batman has a way of talking to the ladies, and he quickly takes a shine to Miss Tremayne. And, in an unorthodox move, he pimps out his "friend" Bruce Wayne for a tennis date with the traumatized victim: 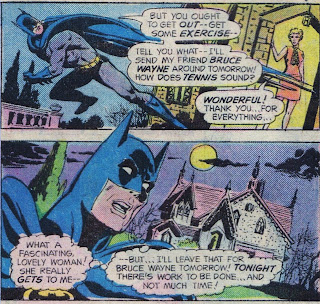 This seems a little ethically shaky.

Batman proceeds to investigate a mysterious "Florentine Box" that seems to be the objective of the murderer. In the process, he tracks down some thugs and beats the crap out of them.

This is a perfect Batman moment: he kicks the guy in the trachea, and then he makes fun of the guy's impaired speech. After that "KR-RACK!" that guy's never talking again.

Batman thinks he's solved the murders, and that frees Bruce Wayne to make some time with Miss Tremayne. Bruce falls hard for her, but unfortunately Batman ends up cockblocking his own alter-ego by solving the crimes and proving that Terry Tremayne was the real murderer:

That is some cold shit right there.

Also, this story reminds us of a very important fact: 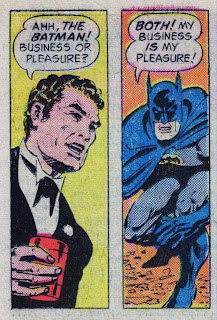