I am, admittedly, way behind on answering questions from the young man who sends me questions about superheroes, and for that I'm embarrassed. However, I'm going to try to rectify that situation by answering a somewhat recent question that he sent me.

Before I start, though, I want to mention that the young questioner has taken on the superhero identity of "Icemaker," though I'm not quite sure what his powers are supposed to be. Anyway, to protect his secret identity, as well as the safety of his loved ones, I will be referring to him from now on as "Icemaker."

If Superman and Batman were fighting all the other superheroes (all of them, including those alien ones that nobody likes), who would win? I think Hercules might win. I mean THE Hercules.

First, I want to apologize for not answering your questions in a more timely fashion, and I appreciate your persistence in continuing to ask them even in my silence.

Second, I would like to remind you that Superman is, in fact, an alien superhero, so you really shouldn't descriminate against the aliens. They have feelings too, you know.

Unless you're talking about the Martian Manhunter. I think we both can agree that that guy sucks.

Third, your question, on the surface, has an easy answer: Superman and Batman would beat all of the other superheroes. This has already happened many times, so I'm not going to get into specific instances. However, it is important to point out that Batman has already figured out a plan to beat every single superhero, with or without Superman. And as we've established many times, Batman can also beat Superman, if it comes down to that.

So, while this does seem to be an easy question, your inclusion of Hercules adds an interesting wrinkle. I'm glad you clarified "THE Hercules," instead of some random dude that called himself Hercules. But I'd be curious to know why you think Hercules might win this fight.

You see, Superman and Hercules have a pretty longstanding rivalry, and there was a time, years ago, that they used to get into it frequently. And you can probably guess the reason for their fights: Lois Lane. 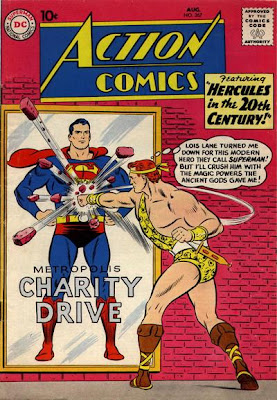 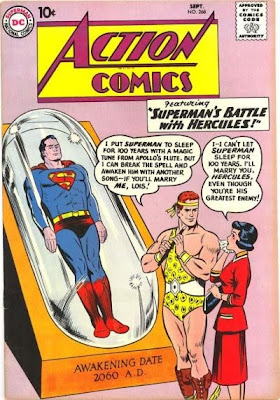 One time Lex Luthor was in prison, and he built a solar-powered time machine out of a clock, some paper clips, some copper wire, and two aspirin. I am not kidding about that. He then used this "time ray" to pull the demigod Hercules out of time to help the villain bust out of jail and commit some crimes.

Hercules, though, figures out that Lex Luthor is a crook, even though Luthor keeps the classic hero supplied with turkeys and cigars (this is also not made up). Then, Superman and Hercules become friends. Superman, as Clark Kent, even helps Hercules find a civilian identity and a job as a reporter, even though the demigod is horribly unqualified for the job and has no social security number or credit history. In fact, everything that Hercules could put down on a job application would have to be a lie. But covering up fraud is just one thing friends do for one another.

The friendship doesn't last long, however, as Hercules soon falls in love with Lois Lane and hatches a plan to win her love by defeating Superman with all of the powers of the gods.

Now, here comes the part that's relevant to your question: Hercules ends up beating Superman with Apollo's magic flute, which puts the Kryptonian hero to sleep for 100 years. Herc then blackmails Lois: if she marries him, he will release Superman from the sleeping spell.

I think there's a valuable lesson here that I should pass on, even though it takes us a bit past the other valuable lesson about who would win in a fight. You should never do what Hercules does here. Blackmail will never be a sound foundation for a long-lasting relationship. If you like someone, and it turns out that the object of your affection actually likes someone else, just move on.

But back to the main question, Superman is only released from the spell by the intervention of Venus, the goddess of love, who is appalled that Hercules would pervert love in such a way. Superman then tricks Hercules into following him through time, and Hercules gets stuck in the classical era without any memory of his time in the 20th century.

So, although Superman ends up winning this fight, he is only able to because he got help from Venus. Otherwise, Hercules would have won. Therefore, I would have to say that you were right when you thought that Hercules might be able to beat Superman.

I would also like to add that this was not the only time that Superman had a run-in with Hercules, as we can see here: 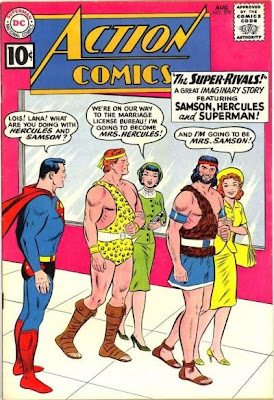 In this story, the two rivals for Superman's affection--Lois Lane and Lana Lang--do what they do all the time: complain that they cannot trick Superman into marrying them. They are making this complaint inside Metropolis's hall of heroes, in front of the Hercules and Samson statues. They decide that they are no longer going to pursue Superman, but they wish some great heroes like Hercules and Samson would propose to them instead. This makes sense: if they can't get Superman, then their second choices should be even more unrealistic and involve time travel.

Superman, being the ultimate manifestation of Foucault's conception of the panoptic society (if you don't know who Foucault is yet, ask your mom), eavesdrops on this conversation. Because he has nothing better to do, he decides to deliver a valuable lesson to Lois and Lana: he goes back in time and picks up Hercules and Samson so that they can court the two ladies. He even teaches the two heroes English so that they have no communication barriers.

Lois and Lana are so taken with Hercules and Samson, respectively, that the ladies immediately agree to marry the strongmen. Everyone is blissfully happy, even though Lana probably has to give up her membership in the Metropolis Country Club. Superman, being the downer that he is, tells the ancient heroes that marriage isn't all its cracked up to be.

The two couples go to city hall to get marriage licenses, but they find out that they will have to wait a week. That's okay for them, though, because they can start getting their suburban lives set up, and Hercules and Samson can go find jobs.

After just a few days, Hercules and Samson learn that their lives with Lois and Lana are domestic hells straight out of a John Cheever story, and the two heroes beg Superman to take them back to their home eras.

The important lesson here? Lois defeated Hercules with her super-nagging powers. So, if we complete the following syllogism--Hercules beats Superman, and Lois Lane beats Hercules--we can logically conclude that Lois Lane beats Superman. We can also add nagging to the list of Superman's other weaknesses--kryptonite and magic.

Important lesson #3: If you are Lex Luthor, you can build a time machine out of common household items, like a clock and aspirin.

Important lesson #4: Superman does not marry Lois Lane because he knows that he would end up spending all of his time trying to meet her needs, and meanwhile the whole world would go to hell in a handbasket because the bad guys would have free reign.

Icemaker, I hope that answers your question and then some. Please keep them coming.

Cover images from The Grand Comics Database.
Posted by Dr. K at 1:16 PM

Flute music makes me go to sleep, too.

What about my question about a leprechaun? I think Superman couldn't catch a leprechaun. My mother thinks he could.

Also, how can Batman beat Superman?

I take issue with your syllogism there at the end. Isn't it possible that Hercules is more vulnerable to nagging than Superman? Maybe in the Lois-Superman combat you imagine, Superman would be able to ignore her long enough to incinerate her with his heat vision.

That should be "free rein."

Luthor could build a time machine from odds and ends obtained in prison, but he couldn't invent a cure for baldness.

Hilarious!
And I asked my mom about Foucault, but she had to look it up, too.

Didn't Superman appear in an issue of DC's "Hercules" in the 70s? Or did I dream that because it would have been awesome?

Online Doctor Consultation people can use this facility with the best options like Video chat, with all features are available here. DoctorCite is one of the best Patient friendly platform.

Harpo, you're half right. Superman did not appear in DC's Hercules series but yes, that would have been awesome.