Movie Review: Into the Wild

Here is my review of Into the Wild, the last review I wrote for the local paper that won't be published there. The only thing I want to add to this review is that I really hope Hal Holbrook doesn't pull an Alan Arkin and upset Javier Bardem for Best Supporting Actor at this year's Oscars. I'll be writing something about the Oscars and my predictions coming up here, but I have a sneaking feeling that Holbrook might get the sympathy vote for this performance. Nothing against Holbrook, but he doesn't show up until very late in the movie, and the performance doesn't hold a candle to Bardem's, which will go down in film history as one of the great villain roles of all time. 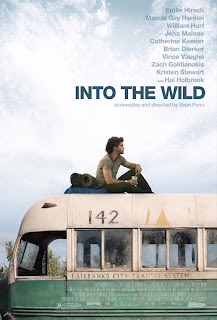 In 1990, Christopher Johnson McCandless, having recently graduated from Emory University, gave his remaining college fund to charity, left his parents and sister, and began a journey around the country that ended two years later, when his body was found, weighing all of 67 pounds, in the Alaskan wilderness. McCandless’s story was documented in Jon Krakauer’s bestselling book, “Into the Wild,” which has now been adapted to film by writer and director Sean Penn. The film is clearly a labor of love for Penn, and Penn’s attraction for McCandless’s unconventional abandonment of American society obviously resonates throughout the film. However, Krakauer’s book presents several daunting challenges in the adaptation to the screen, especially in its episodic structure and an enigmatic central character with whom the audience may have difficulty sympathizing. Despite the film’s beautiful landscapes and nature photography, it ultimately fails to overcome the challenges of compressing McCandless’s story into a full-length feature film. 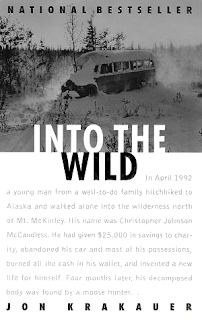 Penn structures the film around various chapter titles from Krakauer’s book, each indicating a different stage of maturation, such as “Adolescence.” In addition, the film frequently flashes forward from McCandless’s American journey to his 113-day survival adventure in the Alaskan wilderness, living inside an abandoned bus that had been converted into a hunting shelter. After graduation, McCandless attempts to abandon his identity and his overbearing parents by assuming the new persona of “Alexander Supertramp.” He then leaves his car in an Arizona ravine after a flash flood and proceeds on foot across the desert, armed with several books on surviving in the wild. His journey alternates between moments of intense isolation communing with nature and other times when he connects with other like-minded travelers, including characters played by the wonderful Catherine Keener, Vince Vaughn, and Hal Holbrook.

The film’s episodic structure—which moves from the Arizona desert to a South Dakota farm to the Colorado River, Los Angeles, upstate California and finally Alaska—makes it difficult for the audience to feel emotional attachment to any of these characters that intersect with Christopher’s life, despite some moving and authentic performances by Catherine Keener and Hal Holbrook. Neither appears for very long in the movie, and Holbrook doesn’t even show up until the very end. Instead, Christopher moves from one location to the next with a suddenness and speed that dillutes the emotional impact he has on these people, or they have on him.

Penn also includes a parallel narrative detailing the McCandless family’s struggle to come to grips with their son’s disappearance. The part of the story is mainly revealed through a voice-over narration from Christopher’s sister, played by Jena Malone. This technique further burdens the film, but one can see Penn’s struggles to remain faithful to this story that clearly inspires him. However, one can’t help but feel some sympathy for the family, even though the parents’ dysfunction is blamed for driving Christopher away, and that makes sympathizing with Christopher even more difficult. Perhaps it’s to Penn’s credit that he doesn’t completely idealize his subject, but the character’s motivation becomes less understandable the more difficult it is to sympathize with him.

Emile Hirsch, who plays McCandless, is also clearly inspired by the story, and his performance is impressive, bringing life to an enigmatic figure who spends much of his time onscreen alone, immersed in his natural environment. As Christopher’s Alaskan adventure—the most compelling part of the movie—progresses, and Christopher continues to make small mistakes that will ultimately compound in tragedy, Hirsch’s performance becomes even more effective. The actor lost considerable weight to visually represent the sharp decline in health the character experienced. Much like Christian Bale’s recent performance in the Vietnam-era P.O.W. film “Rescue Dawn,” Hirsch’s performance deserves special attention for the dramatic physical transformation the actor underwent for this role.

Krakauer’s book has sold millions of copies and inspired many readers with its story of a real-life rebel and adventurer who attempted to abandon society and live a more authentic life. The abandoned bus where McCandless lived in the Alaskan wilderness has even become a kind of shrine, inspiring pilgrimages from fans of the book, including Sean Penn. Those who were moved by the book may find similar connection with the film, but the material ultimately does not lend itself well to the compressed narrative required for film. Penn has certainly created a beautifully filmed movie with strong performances (in addition to a great soundtrack featuring new songs by Eddie Vedder), but it struggles under the burden of an unwieldy story and an elusive central character.
Posted by Dr. K at 11:20 PM

Man I fucking hate this guy.

McCandless's story is tragic, but then so many people have benefited from hearing it... a couple of years of hitchhiking led to his story challenging thousands (millions?) of people to reexamine their lives

McCandless's story is tragic, but on the other hand so many people have benefited from hearing it... a couple of years of hitchhiking led to his story challenging thousands (millions?) of people to reexamine their lives