Recently, I wrote a book review of Charles Hatfield's scholarly book, Alternative Comics, for a special issue on graphic narratives in the journal MELUS (which stands for "Multi-Ethnic Literature of the United States" and not "Massive Evil Liquidation and Ubiquitous Security," as I had hoped), and my pal Derek, who guest-edited the issue, asked for a short bio for the contributors page. After giving the usual academic information about place of employment and publications, I decided to do something a little playful but in keeping with the subject of the issue, and I included the following line:

"His very first publication, however, was a letter printed in the pages of DC Comics' Justice League of America when he was twelve years old."

The letter in question appeared in this particular issue of Justice League of America, dated May 1983 (which would have made me 14, and not 12, as I mistakenly wrote in the bio): 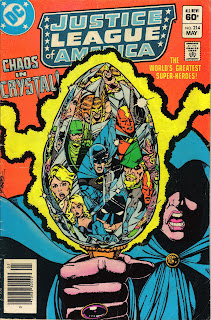 The letter was in regards to the recent JLA/JSA team-up that had crossed over with All-Star Squadron, appearing in JLA 207-209 and All-Star Squadron 14 and 15. I was, and still am, a big fan of those team-ups, but at this point, I was getting a bit tired of the repetition of characters that would appear in them, especially when these events would be the only occasion to see members of the Justice Society on any kind of regular basis.

(Note: Chris Sims once asked me to read this letter aloud in the voice of the Comic Book Guy from The Simpsons. Perhaps unsurprisingly, the voice fits. I'd suggest imagining that voice while reading it yourself.)

I was clearly trying very hard to write in the proper idiom of the comics letter page, with the pithy, casual tone of the first line, and the cliched closing, "See you in thirty!" I also could have used a thesaurus at the time to find an alternative adjective to "great." I might say I was trying too hard, but in truth, I was trying just hard enough, as the letter did get published, after all.

The response my letter got from Assistant Editor Tamsyn O'Flynn falls back on common editorial policy from this time in comics history: the idea that every comic is someone's first. As any current comic readers know, both DC and Marvel have pretty much given up on this policy nowadays.

This was the first of several letters I would write to comics while I was in my teens. And while I was by no means a "letterhack," I did have half a dozen or so letters published, while only three letters I wrote weren't printed (one was to Wonder Woman, another to Batman and the Outsiders, and the third to Alpha Flight. The reasons for the latter two letters failing to reach publication are fairly clear, and may be the subject of a future post).

As you will notice with this letter, I also included my address in the signature. That proved to be both a blessing and a curse. For one, the amount of mail I received at my rural North Dakota address increased tremendously, and getting mail was always something that excited me as a kid, for some reason. Much of it was catalogs and advertising for mail-order comic shops, which I appreciated. Some--like the requests to be pen pals with prisoners--understandably scared the crap out of 14-year-old Dr. K (and there were quite a few of these, including a kind of mimeographed catalog for prisoners seeking correspondences with teenagers).

The best piece of mail I received, however, was a letter from a fellow, like-minded comics reader:

Dear Mr. [K],
I just finished reading your letter regarding this year's JLA/JSA/AS team-up, and I couldn't agree more. Superman of Earth-One, Dr. Fate, Huntress, Power Girl, etc. have been appearing much to [sic] often. You are the first person who has voiced an opinion on the matter, and I thank you. It's nice to know I'm not alone in feeling this way.

I was pretty excited to get this letter, and I quickly wrote back to the writer, beginning a correspondence that would last throughout most of high school. Growing up on a farm in North Dakota, I didn't have any friends who were also comic book readers, so this became my first real friendship with a fellow fan.

The writer since went on to become a local public radio personality and popular storyteller in Louisville, Kentucky, and I've heard him do a couple of stories on NPR in recent years. We even reconnected through a couple of emails about six years ago, though we have since lost touch.

I'll be doing a series of posts in the coming days about the rest of the letters of mine that were published in the 1980s, some of which are a bit embarrassing after the cruel passage of time.

Also, I wanted to let readers know that I'll be at HeroesCon in Charlotte June 20-22, so any readers who are going and want to meet up, let me know in the comments. I will also be glad to sign copies of JLA 214 or any other comics with my letters in them.
Posted by Dr. K at 9:46 PM

Wow, I have that issue. So I can totally discover your secret identity.

I wrote a couple letters in my youth too, and 2 or 3 were printed, and yes, somebody wrote me based on one of the letters. I guess that used to happen before the Internet took over.

You shouldn't have let me know this. I will have to now use my hypno-ray to make you forget.

I had a letter published in Alpha Flight once. Like you, I tried really hard to capture the voice of a typical letter writer. It obviously worked. But I look back on it now and wince.

The subject of my letter was Northstar. Marvel had telegraphed the death of a member of Alpha Flight and hundreds (or so it seemed) of fans had written in to suggest that they off the gay character.

As you can probably imagine, I got some interesting mail after my letter was published.

Hypnotoad to the rescue!