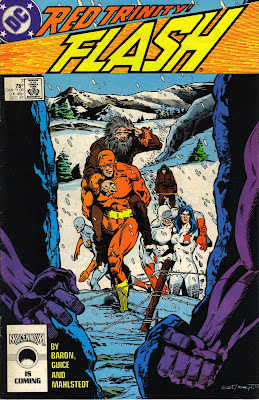 The summer after I graduated from high school, I wrote a couple more letters to comics before heading off to college. Both letters attempted to impart some of my high school knowledge on comics readers. The first letter was written to Wonder Woman, which at the time was being written and drawn by George Perez, and I tried to explain how Perez was using the Greek gods in a way consistent with their representation in mythology. That letter never got printed, perhaps because I misused the term "voyeurism" in it.

I wrote another letter to the newly revamped Flash series, written by Mike Baron and drawn by Jackson "Butch" Guice. In the series, Wally West had taken the place of his deceased mentor, Barry Allen, but Wally had been significantly depowered. At this point in the series, he couldn't break the sound barrier, and he had to take in considerable calories in order to keep going. Mike Baron also had Wally win the lottery early in the series, thus solving his frequent financial and occupational problems.

Though Baron wasn't on the series for two full years, I really liked what he did with it, especially the introduction of other speedsters like Red Trinity and the use of Vandal Savage as a substantial adversary for the Flash. At that time, though, I was pretty much buying anything Mike Baron wrote based on his work on Nexus and The Badger, which remain two of my favorite series of all time.

The letter attempts to explain Wally's difficulty with breaking the sound barrier using some loose fact I remembered from high school Physics. I don't even know if the point I made is accurate, and I have no memory of ever having this knowledge. If it is accurate, however, I have Mr. Wallevand, my high school science teacher, to thank for it. He was fired a few years after I graduated for not doing his job after some complaints were raised about his unorthodox teaching methods, but I guess he could have used this letter as evidence that his students left with some knowledge.

But if someone out there knows more about this stuff than I, please let me know if I was right about this speed of sound thing. 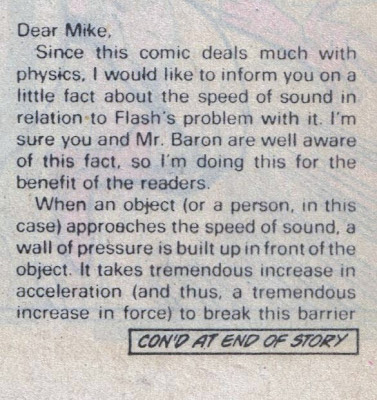 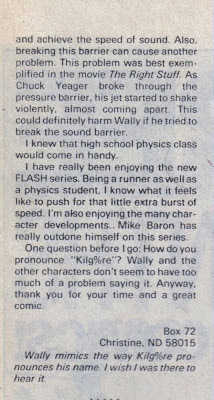 I'm also proud of my 18-year-old self for dropping the reference to The Right Stuff, one of my favorite movies and the film that still makes me bawl more than any other, with the exception of It's a Wonderful Life. Seriously, I just lose it when Chuck Yeager walks out of the burning wreckage in the desert.

Here's the scene from the beginning of the movie that I reference in the letter:

"There was a demon that lived in the air. They said whoever challenged him would die." That gives me goosebumps. Is there a better opening line in movie history?

The answer is, no. Certainly not the one you're thinking of.

While I was never actually a physics student as I claim in the letter, other than taking the basic required classes in high school and college, I was a runner in high school, doing fairly well in track--well enough to letter four years in a row and take home some hardware. I even had the school record in the 300-meter hurdles for a short time, but that was only because I discovered, by looking at the record books, that no one in the history of my school had ever competed in that event. So, though I finished last in that particular race, I set the record. It only lasted, however, until someone else decided to enter that event a few weeks later.

And, in the end of the letter, I ask what was a burning question for a lot of readers of the Flash at the time: how do you pronounce the name of the new villain, Kilg%re? I always just read it as "Kilgore," but Editor Mike Gold's response doesn't help much.

And I did include my address on this letter, but by the time the letter was printed, I had moved out of the house and into the dorms at school, so I wasn't around to receive my mail regularly. I did, however, get one important piece of mail as a result of this letter, which will be the subject of an upcoming post.
Posted by Dr. K at 9:01 PM

Wow, they gave your letter a cliffhanger!

If you haven't seen Lars and the Real Girl, I highly recommend it. Very Capra-esque.

Because of that movie, I still want to be Chuck Yeager when I grow up.

And I still want a young Barbara Hershey to see me off before I risk death in an experimental rocket-plane , where she understands my need to do such a thing despite the risk and tells me to "punch a hole in the sky."