Village of the Damned! 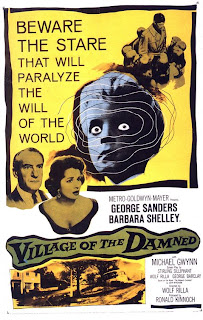 The original 1960 version of Village of the Damned still manages to scare the crap out of me, and at 77 minutes, it offers the kind of tight, efficient filmmaking that is rarely seen today.

I returned to this movie recently after covering The Earth Dies Screaming for the Halloween Countdown. Earth Dies Screaming opens with a scene that's very similar to the opening of Village of the Damned. In Village, some mysterious force causes everyone in the British village of Midwich to drop unconscious simultaneously. We see the villagers caught in the midst of their daily activities, like ironing clothes, cleaning, and listening to music. Anyone who comes within a certain radius from the town succumbs to this sudden unconsciousness. After about three hours, however, the townspeople awaken as if they had all just taken a sudden afternoon nap.

A short time later, all the women of childbearing age in the town find themselves to be pregnant. The movie then effeciently covers the various reactions to this phenomenon, from happy couples to jealous husbands and frightened single women. The women all give birth to similar blond-haired, intense-eyed babies who begin to develop rapidly and exhibit strange behavior.

While most of the townspeople fear these developments, local scientist Professor Gordon Zellaby (George Sanders) looks for an explanation, especially since his own wife birthed one of these children, named David. Zellaby discovers that the children share a hive-mind, so that if one is taught a skill, the others will know it as well. Zellaby then convinces the government that he should be allowed to teach and study the children. This doesn't work out so well, however.

This movie still offers genuine shocks after nearly 50 years. For one, I'm surprised how frankly the movie deals with the subject of immaculate conception as a potential cause for the mass pregnancies. The local vicar, rather than becoming judgmental toward the unmarried women and teenage girls who become pregnant, instead offers his conviction that these women are telling the truth about their chastity.

But the most effective moment, and one that still surprises me even though I know it's coming, occurs when the children force one of the local townspeople to blow his own head off while others are paralyzed into watching. At this point, Professor Zellaby realizes that he cannot control or train these children, and his efforts to do so have only resulted in the loss of life.

Viewers have often tried to read this film as an allegory. Some see it as commenting on the Cold War fear of infiltration from within, and this interpretation is fed by the collective nature of the children's behavior. Viewers also interpret the blond haired children to represent the ideal of genetic perfection advocated by the Nazis. Still more read it as a reaction against the permissive parenting practices advocated by Dr. Benjamin Spock. Others see it as a warning on the dangers of intellect or scientific discovery unrestrained by morality and emotion. I, however, find a different warning in the film, and one that is also shared by such films as The Bad Seed, The Innocents, and the Omen series: kids are evil, and people should really stop having them.

It is often stated that horror movies featuring evil children are particularly effective because they reverse our expectations about childhood innocence. However, I would argue that the truth of the matter is that they expose our naive belief in that innocence. Children can be real jerks, and it doesn't take some kind of alien infestation or demonic possession to prove that: just spend a few minutes in a school yard at recess. 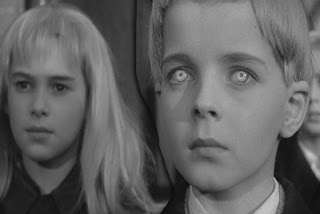 David, the lead child, is played by Martin Stephens, who wins the lifetime achievement award for playing creepy kids after this and The Innocents, which I covered in a previous entry.

One of the things I love about this movie, and probably what makes it prone to allegorical readings, is that we never find out where the children come from or what their real purpose is on Earth. Scientists bandy about theories in the film, including alien invasion and evolutionary progress, but these speculations are soon put aside when it becomes clear that these kids are deadly. One of the hallmarks of true horror is that such mysteries are left intact--that the safety and order that knowledge provides are never achieved.
Posted by Dr. K at 3:22 PM

Labels: Village of the Damned

I love this movie, for many reasons. It's nice to see George Saunders playing a hero. It is also a movie that begs to be scoured for metaphors.

Children of the Damned does not hold up to close scrutiny, however.