Let's get this goddam thing over with. 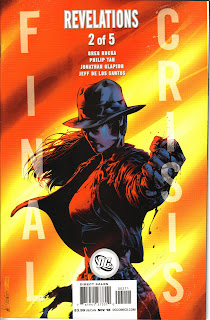 Final Crisis: Revelations presents a certain critical challenge: it's not very good, but it's bad in a way that seems, on the surface, to contradict what I said about Final Crisis itself. That is, I found Revelations to be confusing and difficult to read, so what makes this story a failure when I dismiss similar criticism of Morrison's series.

The main difference, I would argue, is that Final Crisis yields greater rewards upon closer scrutiny, while Revelations doesn't. Now, I do have to say that some confusion was cleared up after multiple readings. For example, when I read this month to month, I did not realize that the dying nun who appears early in issue 1 becomes Radiant, the Spirit of Mercy. I would like it if we actually saw some kind of origin for her, rather than going from her flatline in issue 1 to Radiant's appearance at the batsignal in issue 2. Also, I didn't realize, in issue 5, that the men who tackle Vandal Savage after he stabs the Question with the Spear of Destiny are the same men who killed Radiant.

I think a big part of the problem here is Philip Tan's art. Although some images and designs look dynamic, the overall storytelling is off, and the final two issues look rushed with limited backgrounds. My main issue, besides the fact that the art is just kind of ugly, is that the use of long, narrow, vertical and horizontal panels does not convey enough visual information to tell the story. Here's an example of how the panel design crops and crushes the images: 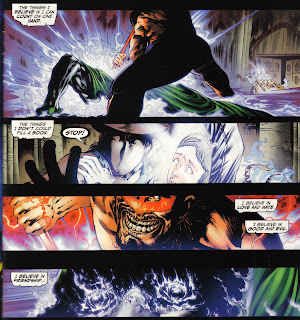 In another example, on pages 2 and 3 of issue 1, we are supposed to be seeing Dr. Light having a "party" in his hotel room with three prostitutes dressed like Teen Titans. This information is only really conveyed through the dialogue because the dark, narrow, vertical panels cut off the images in such a way that the reader just doesn't get the visual information needed to give this scene its impact.

Also, I don't like Tan's design of the mark of Cain that appears on Vandal Savage's face, and the Question's appearance in a fedora and sports bra has to be one of the worst superhero costume designs ever. The Question's face also has too much detail for what should be a blank face mask.

Another problem I had involves writer Greg Rucka's use of voice-over narration throughout the series. Rucka's method results in two competing, rather than complementing, lines of narration: the narrator's and the dialogue's. In many scenes, like the one below, it becomes difficult to read the text sequentially while suspending both lines simultaneously: 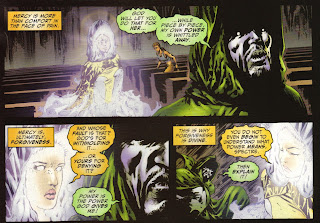 I often found myself reading each page twice: once to follow the caption boxes and once to read the dialogue. This created a disjointed rhythm for the series as a whole, made more problematic by Tan's storytelling issues and the use of multiple narrators distinguished only by different color caption boxes. And when I could get into a reading rhythm with this series, I often found the results weren't worth the effort. 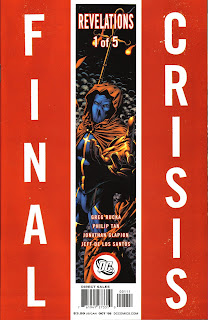 Revelations begins fairly closely tied in to Final Crisis. Dr. Light's party is alluded to in Final Crisis 1, where Light asks Mirror Master for some pharmaceutical assistance. Also, the Spectre attempts to punish Libra for the death of the Martian Manhunter, yet Spectre's powers have no effect.

The series also ties in to the most recent appearances of both the Spectre and the Question. In particular, the Question's story seems to pick up immediately after The Five Books of Blood left off, and the Spectre makes frequent reference to the punishment of his son at his own hands, which happened in an earlier Spectre miniseries. One purpose for this is to give Rucka a chance to wrap up these characters' storylines, which he started at the end of Gotham Central. However, it would be nice if DC had provided some kind of recap page for this series--even though I've read every appearance of the new Question and new Spectre, I still felt a little lost about their status quo.

I tend to get frustrated with the theological drama that Rucka deals with in his Question and Spectre stories. In issue 4, the Question claims that she no longer "believes" in God, at least not one who would allow the Anti-Life Equation to run free, or to allow Cain to punish the Spectre. The Question's crisis of faith needs a subtler, more nuanced approach than this. A character who is interacting with the manifestations of God's vengeance and mercy should not be having any doubts about "belief." Instead, the real debate should be about serving that higher power, which, in the DC Universe, undoubtedly exists as evidenced by the supernatural events that occur on a regular basis. Rucka is a talented writer, but I wish his exploration of faith in a universe where the existence of God is an empirical fact addressed that complex difference.

Revelations is also too long by an issue or so. The first two issues move along fairly well, with Vandal Savage emerging as Cain (a pretty terrible idea, if you ask me) and the Question coming into conflict with the Spectre. The last 2 1/2 issues, however, feature very little progress as the heroes are holed up in a Gotham City church while Cain and the victims of the Anti-Life Equation attack from outside.

In the end, I'm still not clear on the final status of the Spectre. I assume that Crispus Allen has been freed of Spectre and has been allowed to return to the land of the living, but I'm not entirely sure that that's what I'm seeing at the end. And though the series follows Final Crisis well at the beginning, the Question doesn't seem to end up in a place that fits well with her plot in the main series. This was, all in all, the least satisfying of the tie-in series.


In the May comics solicitations, DC has also announced 4 Final Crisis: Aftermath miniseries. Though I question the decision to put these out three months after the series has ended (and to put out so many at once), these do look like they will build on some of the more interesting concepts left over from the series.

The Human Flame is a dead man. Literally just waking up after the events of Final Crisis, he realizes all the heroes in the DC Universe target him as the lowlife who taped the murder of the Martian Manhunter with his cell phone. On top of that, all the villains in the world want to kill him for selling them out to Libra. He's powerless and penniless, and his only chance for survival is to run! This 6-issue mini-series examines the underbelly of the DCU and what happens when the wrong choices catch up with you. Nothing can prepare you for this chase.

In this all-new 6-issue miniseries, Nemesis awakens to find himself held captive by the Global Peace Agency inside the walls of the mysterious Electric City. His fellow prisoners are all members of the superhuman intelligence community, and they're subjected to systematic torture in an attempt to siphon the secrets of the DC Universe heroes in an effort to destroy them. As Nemesis works to escape, he finds few people he can truly trust. But nothing could prepare him for the hideous truth behind his situation!

Japan's Super Young Team wants nothing more than to be seen as heroes in the eyes of their adoring public. Unfortunately, their adventures during Final Crisis have gone unnoticed, and they've been reduced to performing at public appearances and on various TV shows literally dancing for their livelihood. But the appearance of a new American teammate and a deadly threat complicates the motives of the team as they try and find what truly makes somebody not just a hero, but a sensational hero. Discover the path to greatness in this exciting 6-issue mini-series!

In the wake of Final Crisis, the Tattooed Man is considered a hero for the first time in his life. At first, the rewards from his new lifestyle are a welcome change from the rest of what his existence has been, but soon the pressure to stay above temptation and evil start to wear him down. Matters are quickly complicated when he wakes up in the middle of the night to find his body covered in unfamiliar tattoos that seem to have a life of their own. In this 6-issue mini-series, the Tattooed Man finds himself in the middle of a life and death struggle with his own powers and the master plan they seem to have for him -- whether he likes it or not!

The Human Flame and The Tattooed Man series both seem to stem logically from Final Crisis, and the Global Peace Agency and The Super Young Team are strong concepts that can use more exploration. I will definitely be getting Run for the creative team of Matt Sturges and Freddie Williams. Also, Ivan Brandon wrote the awesome Kobra: Faces of Evil one-shot, so I'm curious to see him play in the DC Universe some more. I was hoping for a Super Young Team series following Final Crisis, and Joe Casey is the best possible choice if Grant Morrison isn't writing it. I may end up skipping Ink or at least wait until I see some reaction to it.

Though I plan to do a follow-up entry when Legion of 3 Worlds finishes, this will be my last entry in this series. Thanks to all the readers who came on board for it, and especially to those who commented and kept the comments relatively civil.
Posted by Dr. K at 8:13 PM

I do not know Adam and Eve's current status on New Earth.

I saw it more like hte mark of Cain allowed Cain to control Vandal, not that he actually was Cain. but that's just me


Allen's son was brought back. the whole having to kill his son was all part of a big plan to teach Allen what it meant to be the Spectre.

But I'm still looking forward to it.

I wouldn't take Spectre and Radiant as empirical proof of God in the DCU... after all, we've still never seen "the" God, even though we've seen dozens and dozens of gods from other mythologies. Spectre and Radiant could merely be more soldiers in the service of the Lords of Order and Chaos, or any other similarly powerful higher-plane beings. The lack of God himself perpetuates the same issues in the DCU that it does in our world... we don't know he exists and we don't know who is worshipping him correctly.

Why doesn't Mr. Terrific take the Cosmic Treadmill back about two thousand years and settle this hash once and for all!

"Dr. Light having a 'party' in his hotel room with three prostitutes dressed like Teen Titans". Hey, kids! Comics!

Did Revelations put an end to Dr. K?