Final Crisis Post Mortem Interlude: The Song at the End of the World

In Final Crisis 7, Superman finally kills Darkseid by singing a song into the newly constructed Miracle Machine. Morrison doesn't let the reader know exactly what song Superman sings, but instead leaves it up to the reader to fill in this particular gap.

Here's how I like to think it went down: 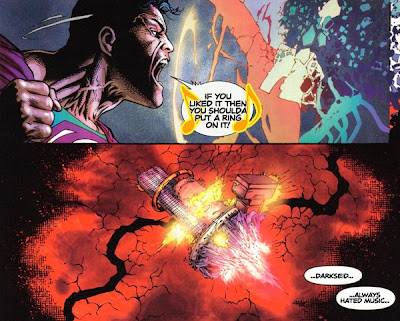 What song do you think killed Darkseid?

Chris Sims presents a good argument that only the unholy sound of Katy Perry could destroy the ultimate evil. If only she would then be encased in inertron to protect the rest of us.

Dorian imagines that Superman would destroy Darkseid with a song about his own existential angst.

Mike Sterling believes that Darkseid could be brought down by the same thing that caused my parents to bang on my bedroom door and scream, "KEEP THAT NOISE DOWN!"

In Kevin Church's world, Superman is singing the Ladyhawke cover.

Bully also presents a strong case that Michael Parè has something to answer for.

Special thanks to Kevin Church for putting the image and text together and saving me from throwing in a sloppily pasted word balloon and text in ComicSans.
Posted by Dr. K at 9:18 PM

Geez people; it's SUPERMAN ferchrissake. What else could it be?

"Don't you wish your girlfriend was a freak like me?"

How could it be anything besides "I Will Survive" by Gloria Gaynor?

"You're Romeo, and I'm the Scarlet Letter"

"My Milkshake, brings all the boys to the yard, damn right, it's better than yours, I'd teach you, but I'd have to charge"

"Red skies are gonna clear up,
Put On A Happy Face..."

"Take-these broken wings. And learn to fly again, learn to live so free! And when we hear-the voices sing-the book of love will open up and let us in!"

well you came and you gave without taking

But I sent you away

Well you kissed me and stopped me from shaking

And I need you today

Or maybe Kate Bush's "Pull Out the Pin." If he could hit the "I love Life!" line with her intensity, yeah, that would knock out a god.

My first thought was Traffic

This is my answer and deep in my heart, I know I'm right.

In seriousness, the song Superman sings is difficult to quantify. One must assume that the song is a song that demands a response from the listener, in order to encourage the multiverse itself to respond to his fervent wish. Additionally, the song must embrace life and demand an escape from stasis - preferably via creation in a physical form as a response to the encroaching darkness (i.e. lovemaking in the dead of night). Lastly, the song should encourage a total embrace of life in all it's vagaries while discouraging a dangerous over-reliance on one's body and one's intellect. Given his thematic use of "story", one might also assume that Morrison would also want to encourage a reference to the act of writing in the song.

As a result, there is only one possible song Superman could be singing to save creation:

"If you like Pina Coladas and getting caught in the rain / If you're not into yoga, if you have half a brain / If you like making love at midnight in the dunes of the cape / I'm the love that you've looked for / Write to me and escape!"

"Feed my Frankenstein...
Hungry for love and it's feeding time"

He even did the "Biff" Pow" sound-effects as he was singing, thanks to Kryptonian polyglottal singing techniques.

"Shootin' at the walls of heartache, BANG BANG! I am the Warrior..."

Because Superman rocks it old skool.

Or perhaps the BARNEY song:

To geek out TO THE EXTREME: Superman must have sang the same song Ben Grimm played on the harmonica to re-created the destroyed universe in Marvel Two-in-One #7.

Yeah, that's right. A reference to a single comic book story from the mid-seventies. Top that, my fellow nerds. Hoiven glaven!

You've got the TOUCH!

I believe that Superman is secretly a Bon Jovi fan and was waiting for the right moment to unleash all its fury on Darkseid.

"Her name was Lola, she was a showgirl, with yellow feathers in her hair and a dress cut down to there..."

For the Anti-Life Equation pales beside the quintessential horror that is Manilow's Copacabana.

Topical, but also one of the worst songs of all time AND grammatically hideous. I nearly disintegrate just thinking about it.

Hell, it worked once already.

"Come on baby shake your body do that conga, I know you can't control yourself any longer!" ~ Gloria Estefan & The Miami Sound Machine 'Conga'

Trust me. This would work:

"What the world needs now is love, sweet love..."

"When we are strong/No one can tell us we're wrong/Searching our hearts for so long/Both of us knowing/Love Is a Battlefield."

This has been the best running gag in the blogosphere in AGES. :-) Well done!

I think this is probably correct

The word balloon was originally wordless because he was mouth-trumpeting the horns from "Pick Up the Pieces."

I'm gonna say, Orbital's "Satan" and the joke only works if you start the song right away...

There have been a million great jokes here, but I'd say 'All you need is love' would be a decent not joke candidate.

It's obviously the opening wail that Robert Plant did for "Immigrant Song"... Ahhhh-a-aaaahhhhhh ahhhhh!

You are all wrong. The right music is a Whitney Houston's song:

This is the song http://www.youtube.com/watch?v=FjeMDvCdrtc

It was skatman you guys.

You're all wrong. It is clear from Green Lantern's follow up lyric later in the issue of "Let the sun shine in" that Superman sang THE FIFTH DIMENSION'S "AQUARIUS/LET THE SUN SHINE IN."

"Believe or not I'm walking on air/Never thought I could feel so free./Flying away on a wing and a prayer./Who could it be?/Believe it or not it's just me.

You Have Lost The Game said...

Dudes and dudettes... You read DC long enough, how can it be any song but SplitEnz "History Never Repeats"...