I was recently digging through the comic collection, looking for the Green Lantern story with the first appearance of the Black Hand, hoping for a Gil Kane punch that would nicely tie into Blackest Night. Unfortunately, like a lot of early Green Lantern stories, it features absolutely no punching, the opponents choosing to shoot rays and crap at each other until one of them loses (on the plus side, it also does not feature Elongated Man tearing the heart out of Hawkman, so at least there's that).

However, that search did give me the chance to re-read one of my favorite comics, The Flash 229, another 100-Page Super Spectacular from which this blog takes its name. The Green Lantern story is reprinted here, along with stories of the Golden Age Flash, Johnny Quick, Silver Age Flash, and Kid Flash. In addition, the feature story contains an Earth-2 crossover, which was often a highlight of The Flash series. 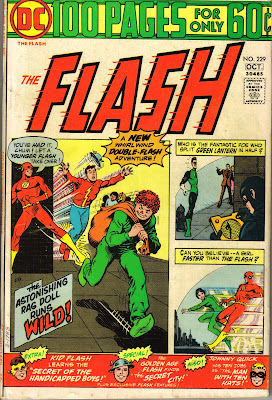 I'm not going to cover this comic right now, but I do want to take the opportunity to plug my favorite podcast, Tom vs. The Flash. Tom Katers devotes about 15 minutes to each issue of The Flash, with three podcasts a week, and he's about three weeks away from covering this issue, so I don't want to step on his toes by saying too much about this issue.

As I've mentioned before, I recently moved, and the new house adds about 10 minutes to an already long commute. However, that extra time in the car is mitigated by the fact that I have more time to listen to an extra episode of Tom vs. The Flash (though once I'm through every episode, I may have to start the series over or something in order to keep the commute from becoming unbearably boring).

The podcast is hilarious, and Tom makes me laugh at the consistent goofiness of this series while still respecting its Silver Age qualities. Tom also frequently comments on the domestic hell that is the Barry and Iris Allen marriage (something that is also depicted here). So now, whenever I re-read my old Flash comics, I can't help but see this relationship in this light, as these panels demonstrate: 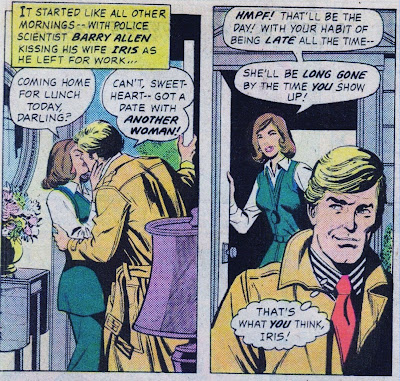 Because of Tom vs. The Flash, I don't read this dialogue as good-natured ribbing between a happily married couple; instead, I see Iris goading Barry into having an affair by needling him for being such a slow-ass loser. I'm looking forward to hearing what Tom Katers does with this story, and if you haven't checked out Tom vs. The Flash, I'd highly recommend it.
Posted by Dr. K at 9:42 PM