The team-up that began in Karate Kid 15 continues in Kamandi 58! 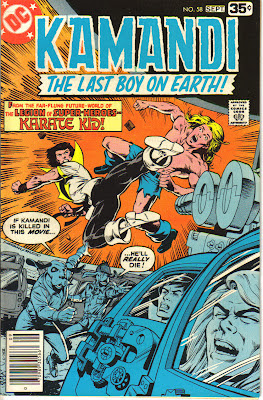 As we left off last time, Karate Kid was being loaded into a machine that would project his consciousness into a film, and both he and Kamandi were about to become a part of the Bruce Lee classic, Enter the Dragon. 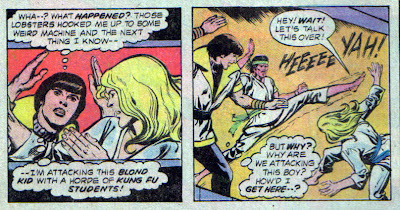 While the fighting continues, Kamandi provides Karate Kid with some hasty exposition, letting the Legionnaire know that they are indeed starring in a movie that has already been made. Soon, the scene shifts from fighting to something more Karate Kid's style:

It seems, from Kamandi's above assessment of cinematic history, that the only movies to survive the Great Disaster were those in Chris Sims's collection.

Meanwhile, Canus and Bloodstalker are fighting the lobster men in an attempt to free the heroes. During their fight, however, they accidentally bump the projection equipment, sending the heroes into a quick succession of different movies: 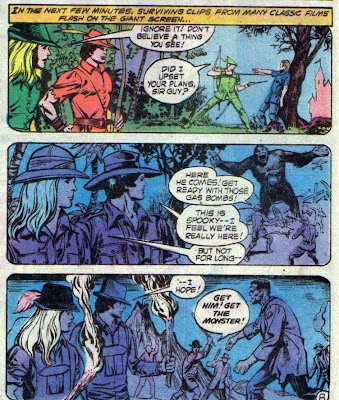 Lucky for them, one of the movies was not Audition.

This causes the lobster men to react in the same way as the audience did at the last Halle Berry movie I saw:

Karate Kid and Kamandi manage to escape with the help of Kamandi's posse. Karate Kid is still stuck with the dilemma he had when the story started, though: he needs to get back to his own time to find a cure for "Diamondeth."

Luckily, Kamandi's friend Pyra has the powers of deus ex machina, and literally creates a new time sphere out of "vortex energy" to return Karate Kid home. Conveniently, this expense of energy makes it impossible for her to cure Diamondeth as well. 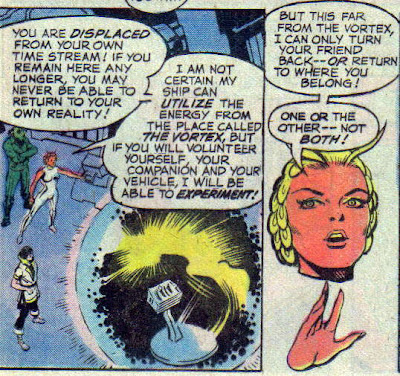 I don't have the issues of The Legion of Super-Heroes where Karate Kid returns to the 30th century, so I don't even know if the Iris Jacobs/Diamondeth plot is resolved. The next time I saw her was in Brave and the Bold 198, where Karate Kid makes the ultimate dick move by returning to the 20th century to invite Iris--who, we must remember, participated in dicy experiments that turned her into an indestructible killing machine in order to impress Karate Kid--to his 30th century wedding with Princess Projectra. That is cold!
Posted by Dr. K at 3:52 PM