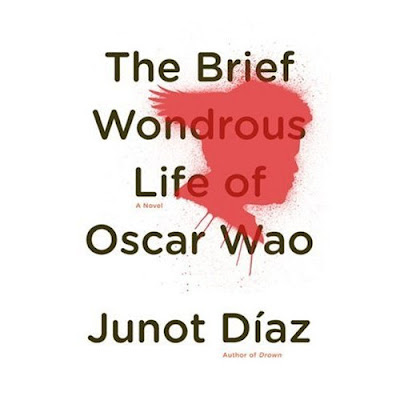 No novel has ever made me as grateful for the way in which I spent the 38 years of my life as much as The Brief Wondrous Life of Oscar Wao, by Junot Diaz. Diaz's eponymous character, an overweight young man whose real name is Oscar de Leon, grows up with his Dominican family in Paterson, New Jersey, and immerses himself in comics, sci-fi, and pop culture in general as a means of escaping from a real world that doesn't treat him very well. The novel is filled with comic and sci-fi references, most of which go unexplained (along with a lot of untranslated Spanish and Dominican slang). However, that's not to say that the novel is not heavily annotated: Diaz also makes frequent references to the 20th century history of the Dominican Republic, especially the long reign of the dictator Trujillo, and the author thankfully provides copious notes to explain that history.

In fact, the novel's title is a bit misleading. While much of it does indeed follow Oscar's brief and wondrous life, more than half covers his mother's and grandparents' experiences in Trujillo's Dominican Republic from 1944-1962, in order to detail the family curse, or fuku, that continues to haunt Oscar's generation. Even then, however, the narrator, who we later find out is Oscar's college roommate, Yunior, keeps the comic references flowing. Oscar's mother, for example is described in her adolescence as having "the Breasts of Luba," with the assumption that the reader understands this reference to the main character of Gilbert Hernandez's "Palomar" stories from Love and Rockets. In fact, Love and Rockets serves as a significant cultural touchstone for the entire novel.

Other comic references also appear frequently. For example, the narrator often refers to himself as "The Watcher," though he is far from the dispassionate observer that this reference implies. Trujillo's political power is compared to Darkseid's "Omega Effect," raising images of eye-beams that curve around obstacles to reach their targets. Oscar's roommate, Yunior, tries to give Oscar some dating advice--"don't bring up the Beyonder any more than necessary"--but Yunior then laments, "Trying to talk sense to Oscar about girls was like trying to throw rocks at Unus the Untouchable."

The references, however, are not merely arbitrary winks at a knowing audience. The narrator attempts to explain Oscar's immersion in this particular aspect of pop culture:

Maybe it was just the zeitgeist (were not the early seventies the dawn of the Nerd Age?) or the fact that for most of his childhood he had absolutely no friends? Or was it something deeper, something ancestral? ... You really want to know what being an X-Man feels like? Just be a smart bookish boy of color in a contemporary U.S. ghetto.

Oscar's outsider status, compounded by his weight, is both satiated and perpetuated by his interests in comics and sci-fi, and to some degree, most "fanboys" can probably associate with Oscar here, whether the racial element is relevant or not.

I'm also quite partial to this description of the 1970s as "the dawn of the Nerd Age." Oscar appears to have been born around the same time as I was, so he was 8 or 9 when Star Wars came out, he got to watch original early Scooby-Doo episodes in their first run, he watches afternoon Ultraman imports from Japan on WPIX, and he matures into Love and Rockets and Watchmen in the mid- to late 1980s.

Incidentally, Watchmen serves as another important cultural touchstone. In order to demonstrate Oscar's despondency over a girl that rejected him, the narrator asks a series of rhetorical questions: "Did he stop reading his Andre Norton books and even lose interest in the final issues of Watchmen, which were unfolding in the illest way? Yes." The trade paperback of Watchmen also makes significant appearances later in the novel.

As someone who spent the first 8 years of his life living in Elizabeth, New Jersey, I also appreciate the frequent shout-outs my birth city gets in the novel. As Oscar and a female friend drive down the New Jersey Turnpike:

They reached the Elizabeth exit, which is what New Jersey is really known for, industrial wastes on both sides of the turnpike. He had started holding his breath against those horrible fumes when Ana let loose a scream that threw him into his passenger door. Elizabeth! she shrieked. Close your fucking legs!

Later, Oscar's sister, Lola, holds a wig over a hot stove, and the burning artifical hair is described as smelling "like Elizabeth." Anyone who ever experienced that smell, especially during the pollution heyday of the 70s and 80s, will appreciate Diaz's descriptions here.

At one point in the novel, a character is getting a severe beating from two Dominican cops nicknamed "Solomon Grundy" and "Gorilla Grod" (which the fanboy in me requires that I mention that this name is spelled incorrectly, missing a second "d"), and the narrator describes the violent seen as, "It was like one of those nightmare eight-a.m. MLA panels: endless." So, in order to unpack this scene, one needs not only to recognize the names of two DC Comics villains, but also to understand just how excruciating 8:00 a.m. panels at the Modern Language Association convention are (especially if you are delivering a paper at them, as no one in their right minds shows up for a panel at that time unless they have a pressing need).

Who, then, is the ideal audience for this novel? Dominican men in their late 30s who grew up in New Jersey in the 1970s and 80s, read a lot of comics and sci-fi, watched a lot of sci-fi movies, majored in English, attained some fluency in Spanish, and pursued employment as a college English professor. Though I'm not Dominican, nor do I know much Spanish, I feel that I hit that target audience pretty well--not quite a bullseye, but certainly within the outer bull. Diaz spends a lot of time, especially early in the novel, explaining the history of the Dominican Republic under Trujillo, so that a reader unfamiliar with that history will not be lost. Otherwise, the novel rewards readers for being as much like Oscar as possible, which results in an interesting degree of empathy for the main character.

And the appeal of the novel goes far beyond it's heavy referentiality. Oscar's story, and those of his mother, grandparents, and sister, is fascinating and compelling, as is the unique narrative voice that Diaz creates for this novel. Amazon, which unapologetically yet unforgiveably jumped the gun by putting out their top 10 lists in early November, ranked this novel in the second position, which also shows that this novel probably has an appeal that exceeds the narrow audience that might get all of its references.
Posted by Dr. K at 2:05 AM

I looked at several top 100 lists yesterday (as I shopped online) and this novel appeared on most of them near the top. It sounds appealing, but my stack of "to be read next" is so thick already, I don't dare add to it just yet...

That sounds like an interesting book. I'm amazed that such a thing would even be published with so many unexplained nerd references, actually.

A co-worker just loaned this book to me the other day - now I'm doubly interested.