The Super-Sons in "World Without Men!"

Arriving in comic stores next week from DC is the trade paperback collection Superman/Batman: The Saga of the Super-Sons, which reprints a load of Bob Haney-written stories from the 1970s where Superman and Batman's sons team-up in adventures that were supposed to be "in continuity." I can guarantee that this collection will meet your FDA-endorsed dietary requirement for craziness.

As a preview, I thought I'd share with you today the amazing Super-Sons story from World's Finest 233, "World Without Men!" (Not to be confused with "It's a Woman's World!".) 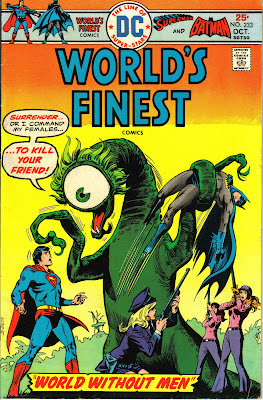 As was popular in the 70s, especially in DC Comics stories, Superman Jr. and Batman Jr. have hit the road to find America, and this adventure seems to have taken them into Gator McClusky's neighborhood. 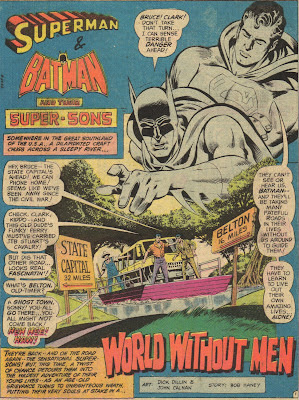 When given a choice between the civilized, relatively safe, but unnamed "State Capital" and the potentially dangerous ghost town of Belton, the junior heroes obviously decide to reject the warnings of the local color and head toward danger.

The Super-Sons make their way to Belton, where they find a rundown old blacksmith shop that appears to have some activity inside. Expecting to see "some muscle-bound ghostly geezer pounding away" (and who wouldn't want to walk in on that scene?), they are instead pleasantly surprised by the local smithy. 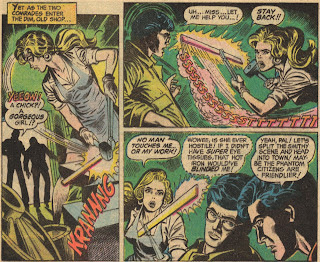 Note to readers: Shouting out "Yeeow! A chick?! A gorgeous girl!?" when you first enter a place of business is not recommended.

The boys soon find that the local blacksmith is not the only gender oddity--the whole town is entirely populated by women, or, to use Bruce Jr.'s words, "beautiful chicks!"

Bruce automatically assumes they've hit the 70s free hippie love jackpot in Belton, but that proves not to be the case, as the local policewoman--or, as Bruce calls her, "police chick"--quickly gives them a parking ticket with a fine of $500. Bruce then appeals their case directly to the mayor, Sister Sara, who just happens to be walking by. 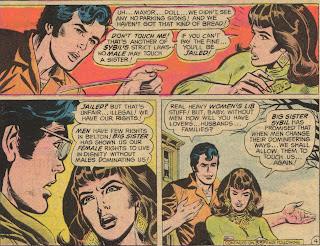 I think refering to a mayor as "doll" and "baby" is a jailable offense in every American city.

Anyway, Mayor Sister Sara provides some exposition here, explaining that the women of Belton are led by Big Sister Sybil, who is trying to inspire revolutionary change in gender equality through isolationist means.

Soon, the limits of such an ideology are put to the test, as a female carpenter, working on a nearby roof, suddenly falls and manages to cling to a fragile gutter. Clark and Bruce attempt to come to her rescue, but they are stopped when the police officer draws her gun in order to enforce the local "no male touching" law. Unfortunately, the carpenter falls to her death before the female rescue team can arrive.

Bruce becomes incensed and threatens to "slap some sense" into all the women, which results in the boys getting scooped up and dropped into the local jail's night deposit box. 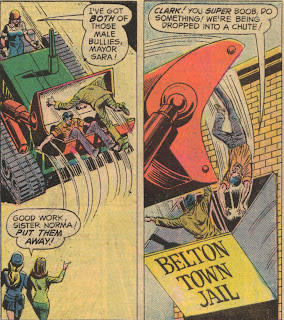 The heroes find several other men in jail as well, all imprisoned for trumped up charges and phony traffic tickets. As night falls, Clark Jr. uses his superstrength to break out, and the boys don their costumes to investigate the funeral of Sister Jane, the dead carpenter.

In this panel, we see the true educational value that comics provided young readers in the 70s: the caption box explains that the word "pirogue" means "swamp boat" ... and why God why is Superman Jr. lifting Batman Jr. by the taint?! 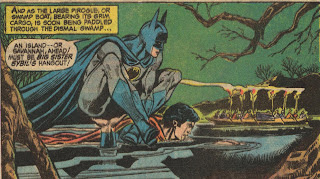 The trail through the swamp leads to the ceremonial altar of Big Sister Sybil, which looks like what we'd get if the Illuminati had done the production design for Kubrick's 2001: A Space Odyssey. 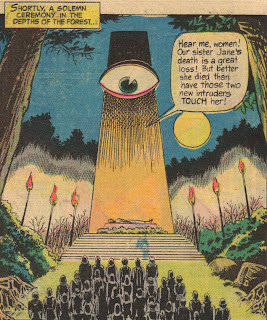 Big Sister takes the occasion to reprimand Sisters Sara and Diana, who have been having second thoughts about the Big Sister's plans. Big Sister also orders the execution of all the jailed men, so the Super-Sons choose this moment to act and confront the monocular obelisk. This does not go well, and Superman Jr. must enact a quick escape.

The duo hide out in a try while the women begin to form a search party. For no logical reason, the Super-Sons choose this moment to switch costumes in order to confuse the dogs. Bruce, in Superman Jr.'s costume, spies Sisters Sara and Diana being absorbed into the obelisk, and he decides to follow suit. He ends up getting trapped in quicksand while the two women are transformed into hideous alligator creatures--one of those amazing twists that really should come as no surprise in a Bob Haney story. 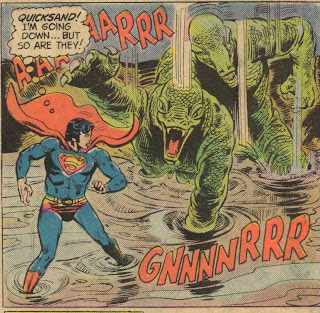 Clark, in Batman Jr's costume, comes back to rescue Bruce, and as they switch back into their normal costumes, they are confronted by Big Sister Sybil in her real form, which turns out to be the hideous cycloptic creature from the cover. 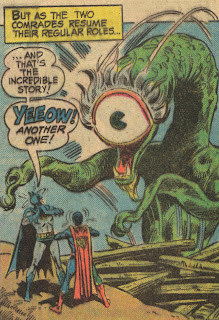 Both Superman Jr. and Batman Jr. attempt to sway Sybil with reasoned arguments about gender equality, and then Supes decides it's just easier to pick up the nearest large phallic object and beat the shit out of her with it. 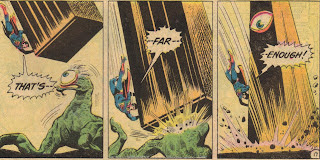 That just seems to make the point so much better.

So, the dangerous, divisive creature is defeated. The Super-Sons return to Belton in order to discuss how Sybil, despite her evil intentions, taught them an important lesson about the value of feminism and the ultimate destructiveness of the patriarchal order or any system in which one group forces its will on another ... 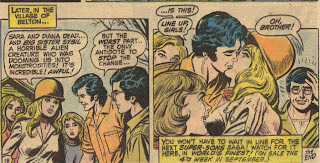 I know my first response when I see a woman competently doing a job that happens to be traditionally done by males is to rush up and patronizingly offer to help her.

I just don't understand all the chick hostility.

>>Note to readers: Shouting out "Yeeow! A chick?! A gorgeous girl!?" when you first enter a place of business is not recommended. <<

Especially not if you are getting your hair cut at said place of business... :(

I can't tell you how excited I am about getting this collection! I remember reading those stories as a kid and thinking, "...man Superman and Batman are acting like total jerks!"