The Super-Sons in "The Town of Timeless Killers!"

Continuing with more of the wacky Bob Haney stories featuring the sons of Superman and Batman, here's "The Town of Timeless Killers" from World's Finest 242. 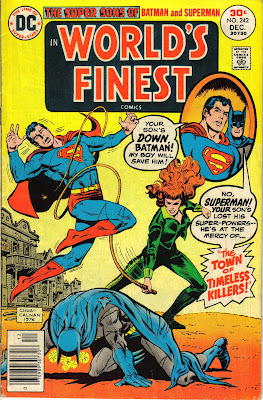 I bought this comic on the newstand in 1976, mainly because I found the cover fascinating. And with that, you can draw a straight line from 7-year-old Dr. K to today's Dr. K.

Back in World's Finest 233, the Super-Sons were driving a Mystery Machine-style van through the American South. Now, they're dunebuggying in the Southwest. Bruce Jr., having been raised in a world where he can rely on his own wealth or the superpowers of his friend to get him out of trouble, shows reckless disregard for property and life by attempting to "thread the needle." He ends up wrecking the buggy, and Clark Jr. escapes from the wreckage but discovers that his powers are gone.

With no means of transportation, they make their way on foot to a nearby ghost town, called Dry Gulch, where they find a strange cemetery. 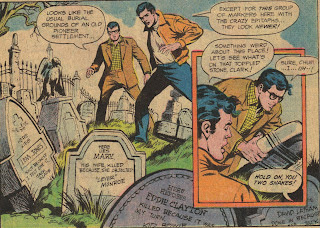 I love the epitaphs on these gravestones. I wonder, though, to what Mary "objected" that got her killed by "Lever" Monroe.

Also, this panel contains a clue to the story's eventual outcome, but there is no possible way anyone would actually get it.

Before the boys can investigate the cemetery further, they are immediately attacked by "Kid Bowie," who announces himself with a tagline. 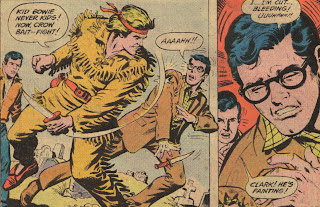 Quick lesson in tagline writing: if you have to repeat your name twice in the tagline, it's not working.

Also, Clark Jr. turns out to be a real wuss here. One little cut on the shoulder and he faints dead away. Not such a big tough guy without daddy's powers, huh?

Bruce Jr. then has to carry the useless son of Superman to safety, but his escape is blocked by another of Dry Gulch's residents: Jack Slade.

Just as Kid Bowie threw a knife to Clark Jr. before slicing him, Jack Slade offers Bruce Jr. a sporting chance of defending himself by tossing a gun in his general direction.

Instead of taking him up on the offer, Bruce Jr. ducks down an alley, where he comes under fire from the third gunfighter in Dry Gulch: "Lever" Monroe, who rocks both the poncho and the handlebar mustache. 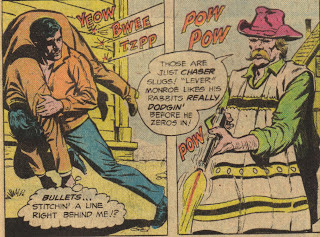 Bruce manages, somehow, to escape and climb up into a water tower, all while carrying the prostrate half-Kryptonian.

During the night, Bruce leaves Clark behind and searches for information. He first discovers that the town is covered in a force field that keeps them from escaping while also eliminating Clark's powers. Bruce's search also uncovers the true nature of the town's denizens: over 100 years ago, the three killers slaughtered everyone in the town after a mine cave-in released the force field. This plot qualifies as relatively sane for a Bob Haney comic.

While they make their plans, a scream is heard from outside the water tower, and Bruce descends to rescue a young hiker named Suzie Wells, who claims to be threatened by the deadly trio. 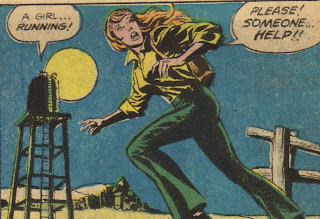 Suzie convinces the boys that they need to face their attackers, so they hatch a plan. This plan involves the pair donning their superhero costumes, though where they've been keeping these costumes is unclear.

What follows is a series of plot developments that lead to the defeat of the killers but make very little sense, and they reveal to us today just how little DC thought of its readers' intelligence in the 70s. 1) Batman Jr. stuffs "an old miner's blasting vest" under his costume to protect himself from Kid Bowie's knife. For some reason, this vest appears to be either invisible or in the shape of a well-defined, muscular torso. 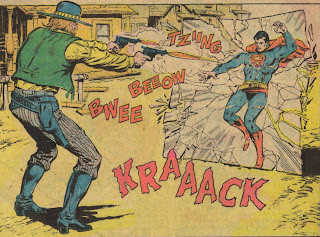 2) Superman Jr. challenges Jack Slade to a showdown, but tricks the gunfighter by replacing himself with a mirror. Slade, somehow, does not manage to see his own reflection in the mirror, nor does he see the outline or shadow of the mirror. 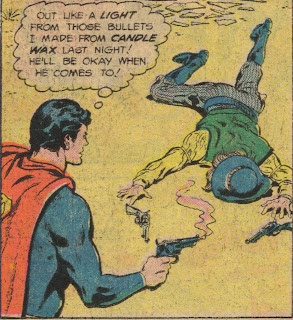 Superman Jr. then guns down Slade, but uses bullets made from candle wax to do so. This is bullshit. 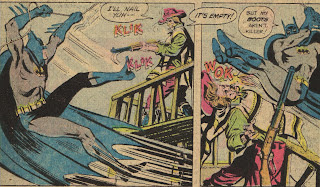 3) Finally, Batman Jr. challenges "Lever" Monroe to a sharpshooting contest, where the rifleman has to shoot out a spade from all thirteen cards in the suit. "Lever" does this, but fails to realize that he's emptied his gun. For this, he gets a kick in the face, which makes this the best plan of the three.

Little did we know, however, that Haney had a twist in store for us (albeit one that is telegraphed by the cover, much like in World's Finest 233): Susie Wells is not all that she seems.

Superman Jr. manages to defeat The Bullwhip Queen when his powers suddenly return. Even when I was 7 years old, I called bullshit on this explanation. 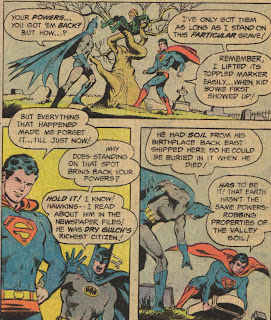 Once the bad guys are rounded up, the duo load them into a wagon and take them out through the needle eye that led to Dry Gulch. However, Haney has another twist in store when the villains are brought to the authorities.

Man, I love DC Comics from the 70s, but a story like this really shows how much nostalgia can often mask the sheer crappiness of these comics. I'm curious to see how fans react to the reprints of these stories in the new collection, The Saga of the Super-Sons, which came out yesterday.
Posted by Dr. K at 2:00 PM

That is just plain awful. Nonsense like the Super-Sons is a HUGE reason why I avoided DC like the plague when I was a kid.