In honor of this blog's 100th post, I present to you the single greatest comic book of all time. It may not be any comic you could guess, but, pound for pound, this tops them all. 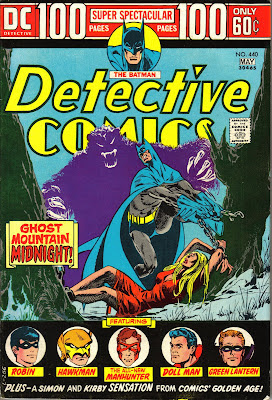 Exhibit A: Awesome Jim Aparo cover (one which, I would add, collectors of a certain persuasion might refer to as a "bondage cover." It also features a demonic bear.).

As the title of my blog indicates, I love the DC era when the company put out these 100-Page Super Spectaculars. Not only was it the best value in comics, but it was also a crash course in comics history. In this issue, for example, you not only get two original tales, but also three Golden Age and two Silver Age stories. Here are the contents:

1. Batman in "Ghost Mountain Midnight!" by Archie Goodwin, Sal Amendola, and Dick Giordano
2. The Golden Age Manhunter in "Cobras of the Deep" by Joe Simon and Jack Kirby (from Adventure Comics 79, 1942: Manhunter fights Nazis on a sub--Awesome!)
3. The Silver Age Hawkman and Hawkgirl in "The Fear that Haunted Hawkman" by Gardner Fox and Murphy Anderson (from Hawkman 3, 1964)
4. Doll Man in "A Million Dollar Corpse" with art by the criminally underrated Al Bryant,whose style reminds me of a cross between Golden Age greats Paul Gustafson and Jack Cole (from Feature Comics 123, 1948)
5. The Golden Age Green Lantern in "Too Many Suspects" with art by Alex Toth and Frank Giacoia (from Green Lantern 37, 1949)
6. Batman and Robin in "Inside Story of the Outsider" by Gardner Fox, Bob Kane, and Joe Giella (from Detective Comics 356, 1966)
7. Chapter 4 of the Manhunter serial by Archie Goodwin and Walt Simonson, one of the greatest stories in comics history

By virtue of the art, this comic is a gold mine: Simon and Kirby, Murphy Anderson, Alex Toth, some artist whose work Bob Kane signed (actually, from the looks of the story, it may really be Kane's art), and Walt Simonson. I challenge anyone to find a comic with a line-up better than that.

The main story alone is all kinds of awesome, too. Just to give you a sense of its awesomeness: It begins with two hillbillies breaking in to the Gotham City version of the Playboy Club in order to kidnap a waitress, and it ends with Batman fighting a bear.

Every single work of literature in the history of mankind pales in comparison to that description. 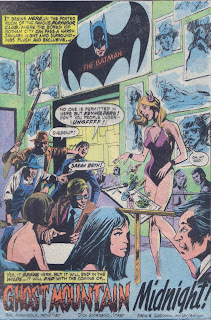 The story opens with the aforementioned kidnapping at the "Playhour Club," and, as one would have guessed, Bruce Wayne is in attendance. 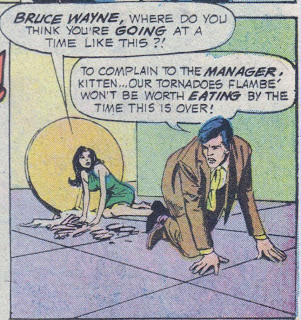 I love this depiction of Bruce Wayne as the effete playboy who is so spoiled and disconnected from normal human behavior that he would complain to a manager that a crime commited in the restaurant ruined his tornadoes flambe.

Bruce then slinks off to change into Batman and pursue the kidnappers. Fighting on the snowy Gotham streets, Batman gets coldcocked by one of the hillbillies, and just before he goes down, he learns that these men are the waitress's brothers, and they come from some place called "Ghost Mountain."

In the days before Google and the internets, Batman has Alfred find this Ghost Mountain on something called "microfilm." The loyal butler informs the Caped Crusader that Ghost Mountain is in Appalachia, and Batman decides it's time for a road trip to hillbilly country.

There, he pays a call on the local sheriff, who conforms to the stereotype of the crooked Southern lawman so popular in the 70s (see also, Sheriff Buford T. Justice, Sheriff Roscoe P. Coltrane, Sheriff Lobo, et al.). And, like several of those sheriffs, this one also seems obsessed with moonshine and revenuers. 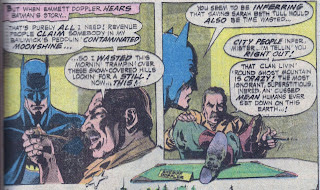 I find this binary distinction between city and country to be interesting, and I didn't realize until now that "inferring" was limited only to urban environments.

I also find it interesting that the sheriff apparently has shit all over his shoes. 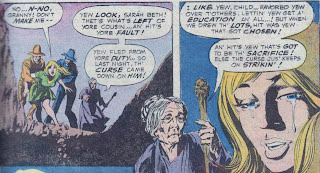 Meanwhile, the waitress who was kidnapped is now with her family, who are planning to sacrifice her to the curse of Ghost Mountain. This should stand as a lesson to anyone who leaves the country to seek out an education in the big city: if you refuse to fulfill your purpose as the sacrifice to a family curse, then someone else is going to die.

It turns out that the curse of Ghost Mountain is just a very angry bear, and Batman, with his extensive experience in bear fighting, takes care of business in one of the greatest single pages ever produced. 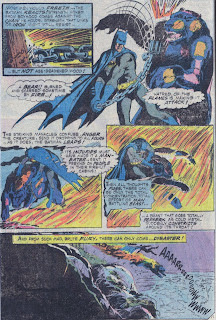 We've all seen Batman punch bears and other animals so often that it's become a cliche. But here, he kicks it up a notch by 1) beating the bear with chains, and 2) lighting the bear on fire and then riding him off a cliff. When you think of all the options Batman had for bringing this bear down, I think we can all agree that he chose the most aesthetically satisfying route.

After dispatching "Smokey," Batman comes across the source of the bear's anger: his cave houses the still that the sheriff alluded to earlier. Also, Batman finds a clue here that leads him back to the sheriff, and punching ensues. 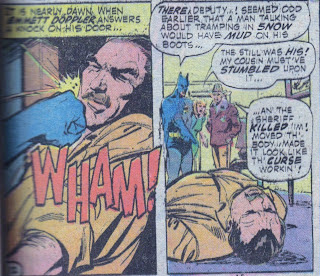 Man, that is one satisfying denouement.

Archie Goodwin and Walt Simonson's Manhunter story is easily in my top 5 favorite comic stories, and chapter 4, serialized in this issue, contains some of my favorite Walt Simonson art. Here are my two favorite pages. 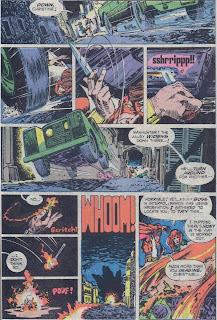 True fact: when I read this page for the first time, at the age of 5, I uttered the response "Fuck, yes." Interestingly, I had never heard the f-word before that.

Seriously, though, that sequence of images where Manhunter slides under the car, cuts the gas tank, and lights the gas on fire is simply awesome storytelling. 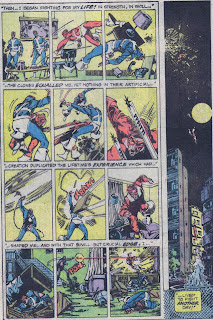 And here is a great fight sequence, leading to a beautiful long panel that perfectly captures the sense of motion on the page. Few artists have that skill to animate the page in this way.

So, on the occasion of my 100th post, I would just like to thank everyone who has come by, read, and commented so far. It's been a blast, and I'm looking forward to digging further into my comics and movie collections.
Posted by Dr. K at 1:00 PM

Batman beats a bear with a chain, sets it on fire, and rides it off a cliff.

I am forced to concede, sir, that this is the greatest comic of all time. Congratulations!

Congratulations on 100, Dr. K. May you find a quarter bin chock full of 100-page spectaculars, the better to keep us informed and amused.

Chance: You're right. Perhaps the sheriff's hostility is toward city folk who come into his town with their poor vocabularies.

This is one of my favorite books as well. When I was a kid, I couldn't get over that sequence where Green Lantern hallucinates that he's throwing a gun at himself.

I had no idea who Alex Toth was back then, but it was a great bit of comic book storytelling.

And of course, Manhunter was just plain awesome.

Man - I need this comic now.