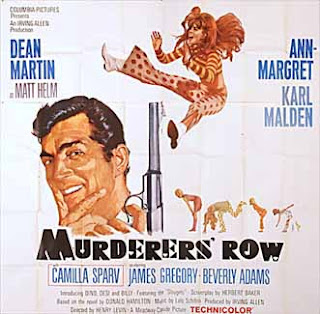 It's been a couple of days, but I'm back, baby, and ready for more Matt Helm action!

Here's a trailer for Murderers' Row, which, as I said before, is my favorite of the 4 Matt Helm movies. This trailer is not included in the Matt Helm Lounge DVD set, but it is representative of the trailers used in this series.

First, in all the trailers, it's apparent that Dean did it in one take, though he clearly didn't quite nail it out of the gate here. Plus, in every preview, Dean's holding a drink in one hand and a cigarette in another, inviting the viewer to come see his new movie. The effect of these previews, therefore, is to blur the line further between Dean Martin and Matt Helm.

The problem I have with writing about Murderers' Row is that the movie is wall-to-wall awesome, and the only way to do it justice would be to liveblog the whole movie. Barring that, I want to hit on some of the many elements that make this movie great.

I would argue that the best part of every Matt Helm movie is the first half-hour or so. During this point in the movie, Matt usually has to make the (reluctant) transition from his photographer day job to the mission. We also get the details of the villain's plot: here, the BIG O, led by Julian Wall (played by an over-the-top Karl Malden) has developed a solar weapon called a Super Helio Beam, which we see destroy a model of Washington, DC.

Wall's plan also involves the assassination of all the top ICE agents around the world (The Japanese agent, code-named "Tempura," is killed by a sponge-bomb while receiving a bath. This scene demonstrates a level of cultural sensitivity that will reach its peak in the final movie, The Wrecking Crew.). As each agent is eliminated, his picture is thrown into a fireplace. Matt Helm's picture, however, only reveals the back of the agent's head, as he is making out with a woman while holding a drink in one hand. The drink is circled and labeled as an "identifying characteristic."

Meanwhile, Helm is engaged in a photo shoot for a new calender, one which features a different state as representative of each month. When we see him, Helm is currently shooting Minnesota in January, and the model wears a fur bikini. Matt positions the model and tells her, "I want to catch you right near ... Duluth." Now, my summary can't really do this line justice, but, suffice it to say, Dean says "Duluth" as if it were the dirtiest word in the English language. Really, the Duluth Tourism Bureau needs to use that line in all their promotions.

Without taking a break, Dean then hits us with another great line when he moves the model again because "we don't want to hide the Twin Cities." I think we all know what cities he's talking about.

I wonder, though, if the writers couldn't have just kept going with this gag. I'm sure, with Dean's delivery, he could have done wonders with Bemidji or Mankato. Or how about, "Move to your left--I want to see Moorhead"? Now, that was a missed opportunity.

This scene also provides the return of Matt Helm's secretary, Miss Lovey Kravezit, who displays the unique talent of being able to take dictation while making out with her boss.

Matt's work, however, proves to be exhausting, and he decides to take a nap while Miss July gets herself ready for her shoot. Matt finds that his rest is hampered by the presence of Miss January in his bed. It turns out that January is the BIG O's assassin sent to kill Matt Helm. The technique she employs is rather elaborate: she activates Helm's automatic bed, which is to send the agent into his Olympic-sized bath tub, where the Helio Beam is shooting down through the skylight. Matt prevents her from escaping, however, and they both slide into the death trap.

Matt Helm is presumed dead, and ICE arranges for his funeral, complete with the Slaygirls all dressed in identical black trenchcoats and hats.

As we can all guess, Matt is not dead, but his death is faked to aid his cover for his mission to stop BIG O's plan for the Helio Beam and rescue the weapon's creator, Doctor Norman Solaris (and with a name like that, you are either destined to make solar weapons or really long, slow-paced Soviet sci-fi movies). Helm's boss, Mac (James Gregory) gives him the mission, and a new cover: "James A. Peters." The intelligence films Matt watches whenever he receives his missions are often not much more than borderline softcore porn, and this one features mainly girls in bikinis on the French Riviera.

Matt arrives in France with his new spy car, and like the one in The Silencers, this is also equipped with booze. However, when Matt opens the bottle to take a swig (while driving, naturally), he instead hears Mac's voice, which explains that this was the best way to ensure that Helm received his orders. Matt laments the waste of "a perfectly good bottle of booze" and then promises, "I'll show you--I'll join the AA!" At least he can admit that he has a problem. But then, he reaches into his inside coat pocket, pulls out a flask, takes a swig, and continues driving.

In one of the movie's more elaborate gags, Matt's investigation takes him to a local discotheque, where the band Dino, Desi, and Billy is playing. This pop band consisted of Dean Paul "Dino" Martin, Desi Arnaz, Jr., and Billy Hinsche (my mom always insisted that "Billy" was the son of Sammy Davis, Jr., and while that would have given the band a nice symmetry, it is not the case.)

Helm awkwardly tries to infiltrate this youth scene by dancing along with the band. Dino looks down at Helm and say, "Now you're swinging, dad," to which Matt makes a response about kids' slang these days. Matt's dancing partner, Suzie (Ann-Margret), then comments, "It's a wise son who knows his own father," and Helm returns with, "The way their wearing their hair nowadays, it's a wise father who knows his own son." This is yet another meta-joke to blur the line between Matt Helm and Dean Martin.

Murderers' Row is clearly too awesome for one post, and I haven't even gotten to Ann-Margret yet, so I'm going to save her for her own separate post tomorrow.

Meanwhile, here's an RC Cola ad featuring Dino, Desi, and Billy from around the same time as this movie:

I also want to link to a helpful article from Cinema Retro that discusses the Matt Helm movies in relation to the Donald Hamilton novels. The article also features some nice images. The novels are, of course, much more serious than the movies, and fans of the books were angered by the films' parodic tone.
Posted by Dr. K at 12:43 PM

In an amazing coincidence, the Duluth Tourism Bureau is one of my clients. (Which is actually true.) We did a fake movie trailer for them last year on an incredibly low budget. (It's at visitduluththemovie.com if you're morbidly curious.)

Sadly, I had completely forgotten about Dino's lascivious mention of Duluth. If only I had remembered, I could have paid proper tribute.

Hey pallie K, dude I loves everythin' that you have written here...like you speak such Dinotruth...."Murders' Row" is the greatest Dinoflick ever....and I loves the clips you have chosen to post...'nother Dinoholic pallie of mine put me on to that Dinotrailer for MR.....I do think the coolest one is the one found at the end of "The Silencers" with our great man surrounded by all those chicks and gettin' kisses from each of 'em as he turns in his Dinobed...and the clip of the RC commercial by DDB is so cool...taken from the "Movin' With Nancy" special. Like you I could go on and on 'bout our Dino is this most perfect of perfect Dinoflicks....with our Dino doin' what he does Dinobest...playin' his ever cool, hip, and randy Dinoself...what could be more Dinoawesome!!!! Can't wait for the next Dinopost 'bout Miss Ann....

Okay, that trailer is AWESOME.

Great write up on Murderer's Row. This is my favorite of the Matt Helm spy flicks. I could talk about this one forever so I can definitely see it taking more than one blog. I do love this trailer. It does blur the lines between Dean Martin and Matt Helm. Essentially Dino is playing himself in these movies. That's what is so cool about them. It's like watching what Dean Martin would be like as a cool and swingin' superspy. This movie had it all. Besides Dino, it had a nice setting, a beautiful co-star (I love Ann-Margaret), an over the top villain, etc. It was neat seeing the RC Cola ad that DDB did. Great blog post.

Hey there, Dr. K. This is another great post. This is my favorite of the Matt Helm spy flicks. I love everything about this movie. I'm a huge Ann-Margret fan, so it's great to have her as Dino's co-star. It was also neat to see his son in that cameo.

Camilla Sparv actually had the best line in the movie: "Come along, Julian. Maybe we can find you someone to run over on the way home."

Donald Hamilton fans hated the Helm movies, just as Dark Knight fans hated the campy 1966 Batman TV show. I wonder if Columbia ever considered doing a straight adaptation of the books? Maybe with Lee Marvin or Robert Mitchum or Clint Eastwood as Helm. Once Dean Martin was signed on, it was probably taken for granted that the series would be a spoof. That said, judging by Martin's dramatic performances-Rio Bravo, Some Came Running, The Young Lions-I believe he could have played a serious version of Matt Helm, if he had wanted.