Dr. K's Guide to British Literature: The Greatest Novel of the 20th Century!

As I may or may not have mentioned here, my Ph.D. is in Twentieth-Century British Literature, which means I've read enough of the last century's great and not-so-great British novels to have a fair judgment on the best work of that period.

And though I'm not quite finished with it yet, I have to say, without a doubt, that the greatest British novel of the twentieth century has to be: 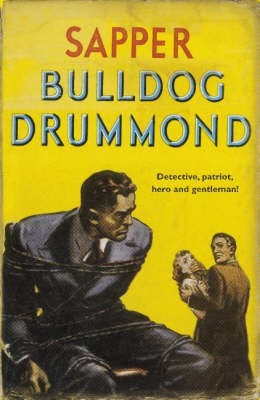 Sure, the Drummond novels by Sapper are plagued with jingoistic patriotism, racism, and, in particular, Sapper's considerable anti-Semitism, though none of that is particularly obvious or evident through most of this first novel, which was originally published in 1920 and appears to be out of print in the US (UK editions of the Bulldog Drummond novels still seem to be in print).

As I've mentioned before, Captain Hugh "Bulldog" Drummond is a World War I vet who finds civilian life "incredibly tedious," so he takes out an ad offering his services for some dangerous work: "Legitimate, if possible; but crime, if of a comparatively humorous description, no objection. Excitement essential."

While in the trenches of the Great War, Drummond trained with a variety of experts in order to make himself an efficient killer. His training includes work with a Dutch hunter, who teaches him the skills of stealthy stalking, and a Japanese man named Olaki, who shows Drummond how to "kill a man with his bare hands in a second." Drummond would often sneak through No Man's Land undetected, silently kill a bunch of Germans in their trenches, return to the British trench, and then fix his men breakfast without hinting at his nocturnal adventures. So, Bulldog Drummond was basically a ninja before ninjas were cool.

Drummond's first adventure causes him to run afowl of master criminal Carl Peterson, who is bent on destroying England. The novel is the definition of a "ripping yarn," moving at an incredibly fast clip from one action scene to the next.

However, what sealed the deal for my assessment of this novel as the greatest of its century was a single scene, about halfway through the novel:

Shadowy, indistinct, in the darkness, he saw something glide between two bushes. Then it came out into the open and he knew it had seen him, though as yet he could not make out what it was. Grotesque and horrible it crouched on the ground, and he could hear its heavy breathing, as it waited for him to move.

Cautiously he lowered the millionaire to the ground, and took a step forward. It was enough; with a snarl of fury the crouching form rose and shambled towards him. Two hairy arms shot towards his throat, he smelt the brute's fetid breath, hot and loathsome, and he realised what he was up against. It was a partially grown gorilla.

For a full minute they fought in silence, save for the hoarse grunts of the animal as it tried to tear away the man's hand from its throat, and then encircle him with its powerful arms. And with his brain cold as ice Hugh saw his danger and kept his head. It couldn't go on: no human being could last that pace, whatever his strength. And there was only one chance of finishing it quickly, the possibility that the grip taught him by Olaki would serve with a monkey as it did with a man. ...

Back went its head; something was snapping in its neck. With a scream of fear and rage it wrapped its legs round Drummond, squeezing and writhing. And then suddenly there was a tearing snap, and the great limbs relaxed and grew limp.

My criteria for evaluation are pretty straightforward. Despite their many qualities, the novels of Virginia Woolf, James Joyce, D. H. Lawrence, and Ford Madox Ford do not feature any scenes of a character fighting and choking a monkey with his or her bare hands. However, in the early draft of Mrs. Dalloway, titled The Hours, Clarissa does fend off a orangutan attack with a bouquet of flowers and a parasol, but since that scene was mysteriously excised by Woolf before the final draft, it doesn't count. And despite the fact that Lawrence's Women in Love has some exciting male wrestling, and Joyce's Ulysses has tons of masturbation, all that is trumped by some good old man vs. monkey action.

I should also mention that the monkey, a pet of the evil Carl Peterson, is named "Sambo." That might be problematic.

Nonetheless, I can't wait to teach this novel in November, in a class of British spy and adventure novels.
Posted by Dr. K at 10:11 PM

Any monkey fighting that occurs in the Circe episode is only metaphorical.

Oh MY! This seems completely rad.