As tomorrow is Jack Kirby's 91st birthday, I wanted to post a couple of thing here in celebration. I recently added to my collection a bunch of 70s Kirby stuff, mostly his work for DC that came out after the Fourth World books ended, such as Sandman and the Dingbats of Danger Street issue of First Issue Special (which, in and of itself, may be the pinnacle of human creativity). But I was struck by some stuff that appeared in some late issues of Challengers of the Unknown just before Kirby's arrival at DC in 1970. 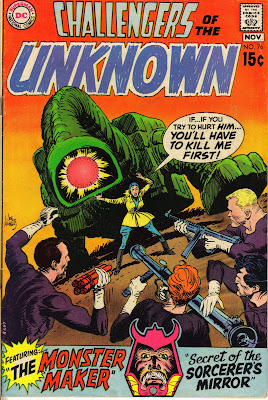 When the Challengers series was coming to a close at this time, DC had resorted to reprinting the early Kirby stories from the beginning of the series rather than creating new material (the series did return with new material, in fits and starts but without being renumbered, in 1973 and again in 1977, just before the DC Implosion). DC was heavily promoting Kirby's return throughout its line, as in teasers like this one from the same issue of Challengers: 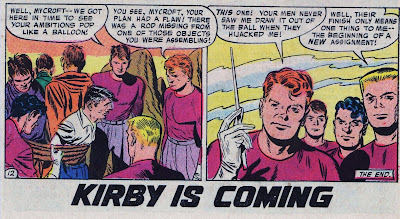 But these final issues of Challengers also seemed to be especially suited to promote Kirby's return, as they could serve as a kind of warm up for readers who weren't familiar with some of his earlier Silver Age DC work.

On the letter page for Challengers 76, we get some commentary that makes for a nice little piece of textual history regarding this important time in comics, which is often cited as a key transitional moment from the Silver Age to the Bronze Age:

While this may have seemed like hyperbole at the time coming from editor Murray Boltinoff (or one of his assistants), but comic history truly was about to get made.

Also, if the dates in this text are accurate, we recently saw the 38th anniversary of Jack Kirby's Fourth World that debuted with his first issue of Jimmy Olsen.

And just for the sake of showing some great Kirby art, here's the introductory page for the Challengers of the Unknown that was originally printed in Showcase 7, but here is reprinted in Challengers 75. 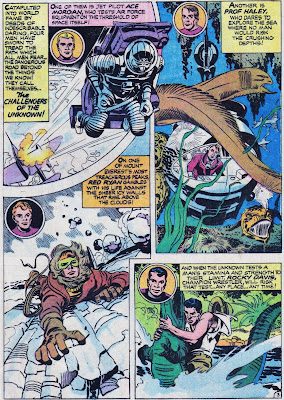 Classic stuff! Thanks for sharing. The full-page image at the end of the post is *awesome*.

To honor the day at the Mighty Mighty MOC-BLOG, we asked comic book creators from the Mid-Ohio-Con family and beyond to answer the question "Why is Kirby king?" A baker's dozen of their responses, including reminiscences by John Byrne, Alan Davis, Mike Grell, and others, appear in today's post, along with a gallery of Kirby’s artwork.

Drop by if you like and check it out at http://midohiocon.blogspot.com.