First of all, I'd like to thank everyone for the support and debate that's been going on in the comment sections. With the debate, I especially welcome the opportunity to defend or, if necessary, revise my thoughts on this series. As long as it all stays civil.

Also, I want to thank everyone who participated in the song meme. That sure turned out to be a thing, didn't it?

By the way, I agree with New York Magazine's Vulture Blog, this one was my favorite. (And while you're there, check out the Registered Weapon web comic--it's hilarious.)

I'd like to point everyone to a couple of articles in Final Crisis that are worth checking out. Steven Grant in his Permanent Damage column at CBR makes some points about the series that dovetail with what I've been saying, though he comes down a bit more ambivalent on the series than I do. I especially like how he separates the (mostly failed) publicity for the series from the story itself.

Also, Andrew Hickey is doing a nice series of posts on Final Crisis, with the effect of kicking me in the ass to get my series done before he makes me redundant. He even does an insightful, extensive analysis of the song that Superman sings to kill Darkseid.

And, finally, Marc Singer provides some essential reading on Final Crisis (though our opinions on the series differ), while also (sadly) bringing his blog to a close. Marc does an amazing job breaking down the various climaxes in the final issue, and he makes a strong case for ignoring the external controversies (shipping delays, editorial statements) when evaluating the story itself. I've admired Marc's blog and his academic writing, and I look forward to his promise of more of the latter in the future.

As I promised, I want to talk about some of my favorite moments in Final Crisis. I'm going to consider just a few here, as I've already gone through some in the previous post. 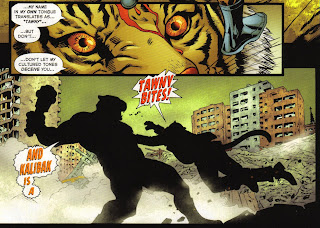 Other than the death of Batman, one of the most talked about scenes in the series was Mr. Talky Tawny's defeat of Kalibak in issue 6. It was, in fact, a pretty awesome scene. After reading the story as a whole, though, I marvel at it even more. Morrison devotes several pages to Tawny, while giving the new Aquaman only three panels (two shots in issue 3 and one in 7). The Tawny story, though brief, is one of the few complete narratives in the series, going from him offering Freddie Freeman some Tiger Tea to Tawny using the strength of the Tiger Tea against Kalibak, and ending with him becoming leader of the tiger men. 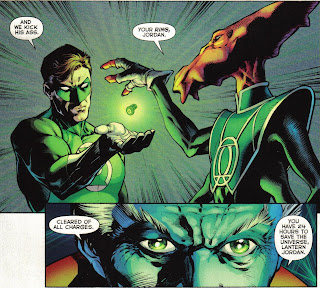 I also really like the trial of Hal Jordan scene in issue 5, with this conclusion that gives a sense of urgency to this turning point in the series: the Guardians have realized their own fallibility, which also proves just how screwed up things are, and they unleash the whole power of the Green Lantern Corps despite the uncertainty of their success. This scene also forms a nicely contained narrative, and it makes me wish that DC had hired Carlos Pacheco to do the whole series. Nothing against J. G. Jones, who did a fine job, but if Pacheco could have done the whole series as well as he did this Green Lantern scene, that consistency could have gone a long way to overcome some of the series' flaws. 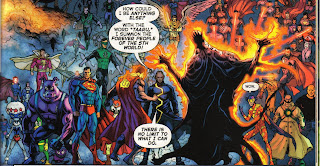 While I initially thought this shot was awesome, I'm starting to rethink my first impression after reading Marc Singer's commentary on it. I like the gathering Morrison has set up here--angels, Supermen from all the parallel universes, the Green Lantern Corps, the Super Young Team, and the Zoo Crew--but I agree with Singer that nothing much happens as a result of it. This is, almost literally, the A-to-Z of the DC Universe, symbolizing the range of stories that can be drawn from this universe (though to be really inclusive, it should contain Scooter, Prez, Date with Debbi, Sugar and Spike, and Cap's Hobby Hints, among others). And this really should have been a double-page spread, while the shot of all the Supermen in the previous spread (though awesome in itself) could have been reduced.

Next, I'll start covering the tie-ins, beginning with the Morrison-penned issues.
Posted by Dr. K at 8:30 PM

I honestly hope I wasn't the only one happy to see the Zoo Crew team up with Superman again. They fought Starro and Gorilla Grodd, after all.

What do you think of the Super Young Team? I think those scenes are extremely important. Morrison condenses all teen superhero comics into a few panels.

He did this with numerous other heroes. Everything you need to know about Hawkman/Hawkgirl, Aquaman, and GA/BC, all in a few panels. In some cases one panel.

I'm enjoying the series of posts, though I'd have to disagree about Pacheco drawing the whole thing. I found his pages to be competent but boring, generic superhero stuff for a project that was anything but. I can't see him bringing the atmosphere and dread to scenes like Dan Turpin's ordeal, as a sweating, rotting Reverend Goode leers and gloats over him.

One thing I'd be interested to see you tackle, as you seem to want to engage the series' detractors, is the question of 'transitions'. Some people seemed to be enormously upset by the lack of transitions between scenes, making the work 'disjointed' in their eyes. This is the only criticism of Final Crisis I genuinely don't understand; one scene finishes, another starts, that's the way it's done in movies and TV and no one complains about that, do they? While Alan Moore-style pun-links between disparate plot strands can work (and in fact, are one of the things that comics can do and other media can't) I can't see how they'd be mandatory. Unless I'm misunderstanding the complaint somehow?

Trey--I agree with you completely about Super Young Team. I would love it if Morrison wrote an ongoing with them, exploring all the conventions of teen superhero comics. But I'll be surprised if that happens.

I also agree with you on the other stuff, too. Green Arrow's line in issue 3 about the superhero draft is just about the purest example of Green Arrow dialogue ever.

Having labelled Final Crisis "gibberish" Steve Grant was certainly provided a lot of food for thought from the series. Enough to fill a good portion of his column. As always he was extremely thoughtful , but calling the series "gibberish" off the top seemed rather flippant.

Your analysis of Final Crisis (and the hatestorm of criticism it inspired) has been like a tube of chapstick on my weathered lips.

Curiously, my favorite single issue of the entire series (+ tie-ins) was the Sketchbook. There was just something about those brief descriptions of the Super Young Team and Big Science Action that fueled my imagination and got me really excited about the possibilities of comics again.

If Morrison's mission was to remind us that anything is possible in this medium, he succeeded (with me) from the outset.

I like the gathering Morrison has set up here--angels, Supermen from all the parallel universes, the Green Lantern Corps, the Super Young Team, and the Zoo Crew--but I agree with Singer that nothing much happens as a result of it.

The fact that we don't see them "do" anything is beside the point, IMO. It's all about the imagination and storytelling at this point: "If it don't exist, think it up. Then make it real."

A crabbed, unimaginative, vampiric figure like Mandrakk might succeed against the likes of, oh, Youngblood. But against a universe that could create not only a Green Lantern Corps and a Checkmate... but also Yankee Frickin' Poodle?

That's the point you realize Mandrakk doesn't have a chance.

So, my take on the Zoo Crew's inclusion is that it was necessary to complete the army of 52 Variant Supermen who are implied to be the new form of the Infinity Man (as least the way I read the scene) later on in the book by Nix Uotan.

Captain Carrot is not only a Superman analogue but one who got his powers directly from interaction with the pre-Crisis Superman of Earth-1, but is "solar-powered" in the same way all the other variant Supermen are. Where their bodies absorb sunlight indirectly, the good Captain is created in a flash of light when his alter-ego eats one of the special carrots he grows on his windowsill.

Now, Morrison doesn't spell out any of this regarding Captain Carrot, so if you don't already care about the character, its possible significance is entirely lost. It just feels like he randomly decided to stop FC #7 to deal with a dangling plot thread from a miniseries that sold 15,000 copies per issue at best.

The way it came off to me, who treasured Captain Carrot comics found in quarter boxes as a kid, was Morrison wanting to definitely acknowledge for the first time that the Zoo Crew are absolutely part of the DC Universe. Remember that editorial chose to leave them entirely out of the original Crisis, instead retconning Earth-C into an "alternate dimension" in a way that made no real sense, and post-Crisis materials rationalized the characters as the stars of a popular DCU Saturday morning cartoon.

By including the Zoo Crew in Final Crisis, Morrison instead chose to say that those stories-- originally intended as part of the multiverse-- matter just as much as anything else DC's published in a metafictional sense. Zoo Crew comics were often too absurd and bad for previous editorial regimes to acknowledge, so this struck me as fairly important to conveying the full meaning of what the stand against Mandrakk meant in a thematic sense.

Of course, I could also just be overthinking the two pages of FC7 that happen to star a cartoon rabbit I rather used to like as a kid.

Alicia, I really like your take on why the Zoo Crew is in Final Crisis, and this is exactly the kind of thing that Final Crisis invites the reader to do.

I wish DC would put out that Captain Carrot Showcase book that's been promised for a while.