The Gil Kane Punch of the Week 21: Sword of the Atom!

To launch us back into the regular, post-Halloween Countdown rotation on this blog, here's a Gil Kane punchstravaganza from Sword of the Atom 1 (Sept. 1983), script by Jan Strnad. I have a fondness for this series because it takes one of Gil Kane's signature characters and puts him in a sword-and-sorcery mileau perfectly suited to Kane's style. My one complaint about the series, though, is that it's not wall-to-wall punching. In fact, this is one of the rare pages in the series where some solid Gil Kane punching occurs. 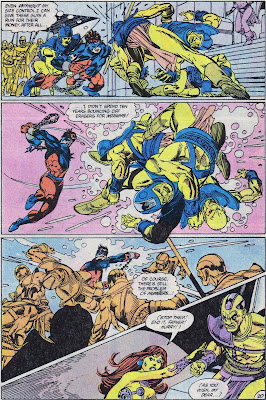 Despite the fact that Atom can take out three dudes with one two-fisted blow (without the benefit of his size and weight controls), he's quickly outnumbered by the yellow guys, who then throw him in a cell with some giant rats.

In other news, I've been outed this week as a contributor or "Bureau Chief" for this, along with a bunch of very funny people that I'm proud to know. This is one of the coolest experiences that I've ever been involved in, and it just seems to get cooler on a daily basis.
Posted by Dr. K at 4:36 PM