On this eve of Thanksgiving, I wanted to share something that I'm thankful for. I'm certainly thankful that I live in a world where I can spend much of my time talking about Gil Kane punches and the world's greatest team of adventuring aviators. But I'm also thankful that, in Military Comics 8, writer Dick French saw fit to create a fight song for the Blackhawks: 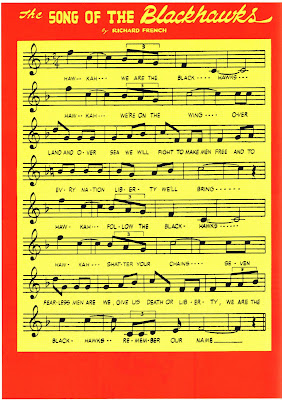 I especially like that the music drops down real low for "remember our name." I also like to imagine that there are times when Olaf gets really drunk and won't stop singing this song, to everyone's annoyance.

So, instead of running the story where Chop-Chop forgets to make Thanksgiving dinner for the men and accidentally cooks the team's hawk mascot, Blackie,* I will just let you ponder the fantastic existence of "The Song of the Blackhawks."

*To my knowledge, no such story exists. But then, I haven't read every Blackhawk story ever made, either, and crazier shit happens.
Posted by Dr. K at 7:28 PM