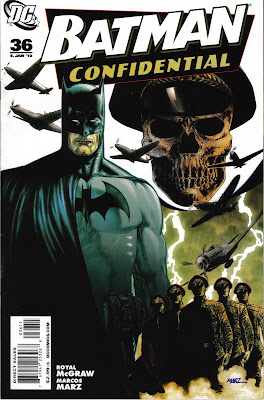 Batman Confidential 36-39 featured a contemporary update for the Blackhawks in a story with the inevitable title, "Blackhawk Down," written by Royal McGraw and drawn by Marcos Marz and Luciana del Negro. Along with the recent The Brave and the Bold story and the upcoming First Wave series, it signifies a kind of mini-renaissance for Blackhawk.

This story is a bit of a mixed bag, but I ended up liking it overall, mainly because McGraw clearly did his research, and he demonstrates a particular fondness for the Mark Evanier/Dan Spiegle run from the early 80s. In particular, the villain of this story is Ted Gaynor, the 8th Blackhawk introduced late in that series as a replacement for Chop-Chop, who takes a leave in order to fight the Japanese invasion of China. As Evanier wrote him, Gaynor is a total dick, and he ends up getting ostracized and ultimately kicked off the team for some rather extreme, uncompromising views.

Gaynor, who somehow survived World War II while also remaining youthful, has devised a plan to steal new technology from Blackhawk Industries (now run by Wu Cheng's/Chop-Chop's nephew), pin the theft on the Chinese, and spark a war between the U.S. and China. As part of his investigation, Batman is led to Blackhawk's grave in Warsaw, Poland, and after being attacked by an awesome, giant, mechanical, Nazi octopus, he discovers that Blackhawk's corpse has been disinterred. At the cemetery, Batman also teams up with Lady Blackhawk, who happens to be there for her annual visit to the gravesite.

Perhaps my biggest complaint with this story is the depiction of Lady Blackhawk. First, Marcos Marz, whose art is otherwise pretty solid in this series, draws almost every image of Zinda Blake as if it were a pin-up, and he gives her a ridiculously short skirt, as can be seen on the cover of the second issue: 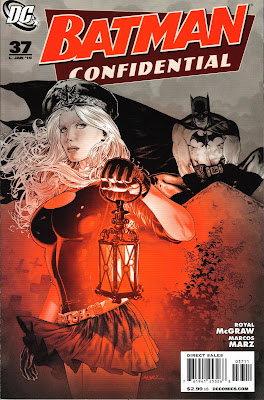 Also, Marz has a bit of a problem drawing facial expressions that aren't grimaces:

It looks here like Lady Blackhawk is laughing when she's supposed to be shocked and horrified.

Lady Blackhawk ends up getting captured by Gaynor, and he ends up torturing and brainwashing her to aid his cause. McGraw is working with the character's history a bit here, as Zinda spent some time in the Silver Age brainwashed by the villain Tiger Shark into serving as his Lady Tiger Shark (TS also makes a reappearance here, in mutated form, but Gaynor commands Zinda to slaughter him, which she does). So, I see why McGraw does this with the character, as it is in keeping with her continuity, but it's one of those many unfortunate aspects of Blackhawk history that may be best left in the past.

One of the things I loved about this story, though, is the little Easter eggs that McGraw throws out for the dedicated Blackhawk fan. For example, there's this exchange between Gaynor and Batman about the identity of the body buried in Blackhawk's grave: 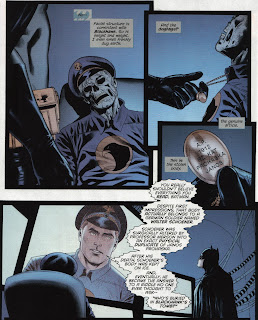 Gaynor here refers to a Nazi double of Blackhawk who appeared in issues 266-267 of the Evanier/Spiegle run. The doppelganger was actually identified and killed by Gaynor himself during his first mission as a Blackhawk. And, in general, I like the effort McGraw makes here to fuse that early 80s run with the late 80s version of the team that spun out of Chaykin's miniseries.

Most important, though, is that McGraw gets one of the central appeals of old Blackhawk stories: the crazy, giant weapons the team had to fight. Evanier made this a significant part of his run by placing the Blackhawks up against a recurring nemesis named Professor Merson, who created the War Wheel and other bizarre machines for the Nazis. In this story, Gaynor steals from Blackhawk Island a bunch of Merson-designed weapons, including the giant mechanical octopus and a huge flying skull that becomes the villain's base of operations.

In the end, though, I have mixed feelings about the biggest revelation in this story: that Blackhawk faked his own death and is still alive, pushing the century mark and running the Blackhawk corporation from behind the scenes. First, it seems odd that Batman wouldn't have known about this, as the story establishes that Bruce Wayne is an investor in Blackhawk technology. Second, Blackhawk comes across as kind of a dick for not letting Zinda know that he's still alive. But, in general, I'm just not sure how I feel about Blackhawk being alive in current continuity. Now, I know that the Batman Confidential stories have a rather flexible relationship with continuity, so it wouldn't take much for a later writer to simply ignore this development. More problematic, though, is Blackhawk's presence in the contemporary world. The character works best in the past--in a World War II or Cold War milieu--and so, I'd rather see those stories than "Old Man Blackhawk" stories set in the present. Nonetheless, I'll be curious to see if future writers, or even McGraw himself, run with this as the new status quo.
Posted by Dr. K at 6:23 PM

Man, that sounds pretty horrible, especially the treatment of Zinda after she was written so well in Birds of Prey. First the recent treatment of Dinah, now this - it's enough to give Gail Simone a complex...

My beef with Chaykin's Blackhawk is with the name Howard gave him: that of a Hungarian animal impersonator. (Janos is a Hungarian name; the Polish equivalent is Janusz.)