Blackhawk Wingsdays: The Menace of the Molecule Man!

Unfortunately, I was unable to post a new Blackhawk Wingsday last week, and today's entry is coming in late, so most readers won't get to see it until Thursday. So, I apologize for the lateness, but to make up for it, I've picked a story that I'm sure will not disappoint readers: "The Menace of the Molecule Man!" from Blackhawk 191 (Dec. 1963): 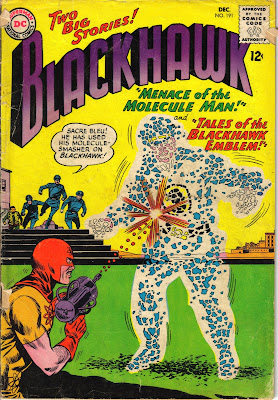 As I've mentioned before, other than Tiger Shark and a couple of mad scientists, the Blackhawks never had much of a rogues gallery, and Molecule Man provides a good illustration as to why that was the case. For one, their villains suck. To be more specific, they have sucky powers, and they wear stupid costumes that would make most real superheroes just laugh and walk away, shaking their heads at the villain's ridiculousness. The Blackhawks, however, are not exactly picky about the criminals they fight, so they usually get stuck with the bottom of the bad-guy barrel.

The story opens with Blackhawk, Olaf, and Hendrickson enjoying some R&R while taking in the lastest sci-fi epic, "Space Pilot," a film Blackhawk declares is "top notch":

Just as they are leaving the theater, however, they hear an alarm, which leads these crimefighters to a strange sight: a bank that has been molecularly disassembled and mysteriously pulled through the air.

The Blackhawks give chase in their command car, but that vehicle is suddenly struck by the same molecular ray, the physics of which don't really make sense.


The story then cuts to the Molecule Man and his gang, who have re-assembled the bank at their hideout, where they can cut open the vault at their leisure. One gang member, however, points out that it would have been much easier if Molecule Man could have used his ray on the bank president, who could then provide them with the vault's combination. Molecule Man points out that he is working on this very problem.

As days pass, the Blackhawks try to anticipate Molecule Man's next move. In order to cover as much ground as possible, they split into two teams: Blackhawk, Stan, and Chuck at the municipal museum to protect a priceless painting (though not, this time, of Blackhawk), and Andre, Hendrickson, Olaf, and Chop-Chop (otherwise known as "the scrubs") at the airport watching out for the latest shipment of government bullion.

I think Blackhawk was just looking for an excuse to spend the day at the museum, because of the two choices, the airport seems the most obvious target. And that turns out to be the case, as Molecule Man makes his move there: 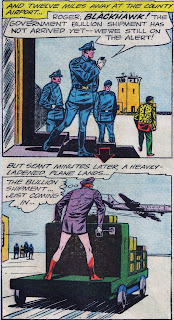 Molecule Man's disguise here--hat, jacket, but no pants--is the definition of half-assing it, and this alone proves why Blackhawk villains suck. But to be fair, the eagle-eyed Blackhawks did not spot the guy wearing a hat over a mask and no pants as he quickly approached the gold.

The Black Knights give chase and pile on to the Molecule Man's escaping plane. Here, we get a fun statistic about the Blackhawks: 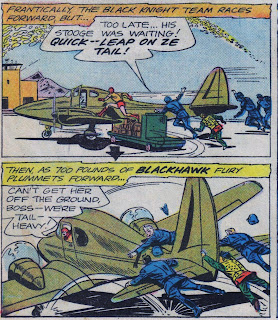 So, collectively, Olaf, Hendrickson, Andre, and Chop-Chop weigh 700 pounds. Let's try to break this down. I put Olaf at a solid deuce. Hendrickson is no lightweight, but with his height, I'd guess him to be 180-190. Andre weighs in at a svelte 160-170. That puts Chop-Chop at under 150, which makes sense.

Whatever the case, 700 pounds of solid international adventurers is too much for the tiny plane, and it crashes before it can even take off. Molecule Man and his gang then run off to a nearby waterfall, where the villain enacts an ingenious escape plan: he uses his molecule gun to solidify the water. 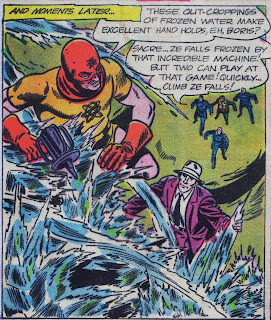 The boys try to give chase, but they end up all wet.

And, as we can see in the above panel, we get yet another quality control issue in the coloring, one that seems to plague this series: the colorist has given Olaf dark hair instead of his usual Scandinavian blond locks, which shows that no one in editorial or production at DC was really paying attention to this comic.

Several more days go by, and the Blackhawks investigate another crime: the mysterious disappearance of a cattle herd. Is there no crime outside the Blackhawks' purview? 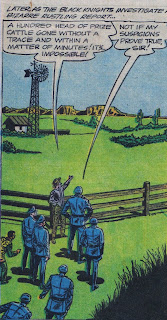 Molecule Man now decides to get into a new line of work: blackmail. He calls up a major movie studio and threatens to kidnap their multi-million dollar star, Tab Tyler. The mogul calls the police, who really don't want to be bothered with this crap, so they call on the Blackhawks, who aren't doing anything important, anyway. 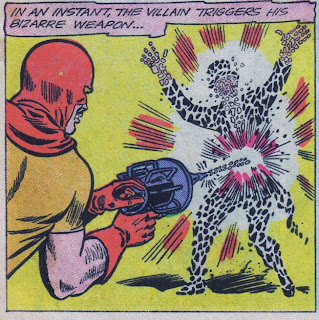 But when Blackhawk charges forward, while the other team members sit back and watch, the fearless leader has his molecular structure shattered by the villain's weapon. 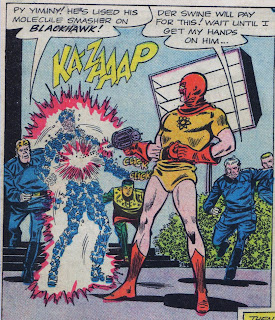 This leaves the team leaderless, but they miraculously manage to defeat the villain on their own. First, Chuck was disguised as Tyler all along, so it was he who was transported to the villain's lair. Then, the other Blackhawks break in and beat the villains up in their sleep. With the molecule gun in their possession, they return to the movie studio and re-materialize Blackhawk, ending the adventure with Andre promising to destroy the machine.
Posted by Dr. K at 11:04 PM

They eat up the villains in their sleep? That's just not heroic.

Y'know, I've got a bunch of these crappy old Blackhawks from the period when it was (partly) edited by Jack Schiff-- and they all read a lot like the Schiff Batmans of the same time.

Schiff's writers created so many dorky villains (though a few of those created for Batman did manage some staying-power) that I've often thought Schiff must have really WANTED dorky villains. Or maybe he thought if his writers hurled enough shit at the walls, they'd create another Joker.