Apes Week Day 6: I miss you ape, I miss your toffee cape 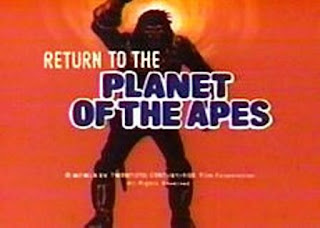 From 1975 to 1976, following the cancellation of the short-lived Planet of the Apes tv series, came the Saturday morning cartoon Return to the Planet of the Apes, which, other than some comic series and novelizations, marks the end of Apes-mania.

Like most of the other entries in the franchise, this series follows time-traveling astronauts, in this case, astronauts Bill Hudson, Jeff Carter, and Judy Franklin. Unlike the other entries, however, this one makes a better attempt at a diverse cast, with one white male, one black male, and one white female astronaut. The closest the tv series got to diversity was casting blond and brunette leads.

The cartoon tries, moreso than the tv series, to insert itself into Planet of the Apes continuity, though with mixed results. The astronauts land in 3979, an event which technically occurs after the destruction of the earth in 3955. In their first contact with humans, they meet Nova, who is wearing Brent's dogtags. We find out later that these dogtags belong not to John Brent, the astronaut from Beneath, but "Ron Brent," a completely different astronaut who left earth more than 100 years after Bill, Jeff, and Judy. This may be an attempt to fix a potential continuity error from the beginning of the series.

Cornelius and Zira also appear, though it seems that they have never seen a talking human before meeting Bill, whom Zira names "Blue Eyes" (apparently, she has a thing for eyes). The human's nemesis is General Urko (from the tv series), voiced by veteran cartoon actor Henry Corden, whose voice is a little too familiar for this role. While I was watching this show, in fact, the Other Dr. K came into the room and asked, "Why does Fred Flintstone hate humans so much?"

Despite the flaws in the Filmation-style animation used by DePatie-Freleng, where most images are static, many shots are recycled in a single episode, and each episode has about 5 minutes of total animation, the series holds up well. Some credit goes to artist Doug Wildey, co-creator of Johnny Quest, for making some of the static images detailed and attractive. Much of the credit, however, goes to the writers (especially Larry Siegel, whose episodes seem much better than others), who often work well within the limits of the cheap animation to create fun stories that adhere to an internal continuity within the series. In fact, the series seems to be building toward a specific conclusion: humans finding a place in the world in which they can leave separately from apes, in peace. Each episode brings the humans a step closer to achieving this goal.

The writers also take some freedoms with the animation that couldn't be done within the technological limits of the films or tv series. For example, threats often come from monsters, like a huge shrieking dragon or an undersea creature. Also, the ape society in the cartoon is much more advanced than in the movies (though not compared to the novel). In the cartoon, apes drive vehicles, watch television, and go to the movies.

This allows for some nice ironic moments along the lines of "human see, human do" from the first movie. In the cartoon, a hayseed ape driving a pickup listens to a new hit country song, "You Drive Me Humanoid." Also, ape soldiers talk about the recent film release, "The Apefather," and Cornelius and Zira own a first edition of hte complete works of William Apespeare. These are silly puns, but they work well in this cartoon.

This series also has some clever moments. For several episodes, Judy is worshipped by the Underdwellers, who think of her as their predesitined savior, "Oosa." It turns out the Underdwellers are in possession of a statue commemorating Judy's apparent sacrifice to the space program, under which is inscribed "USA."

In a lot of ways, I prefer the cartoon to the tv series. The cartoon has its own continuity that develops throughout the thirteen episodes, whereas the tv series seems to just return to the status quo at the end of each episode, with Burke, Virdon, and Galen on the run from Urko and in search of a computer that might help the astronauts get back to their own time. 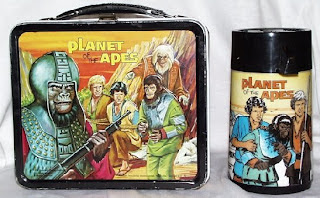 While Apes-mania ran for roughly seven years, much of its pop culture saturation came about in the last two years, with the release of the toys, games, lunchboxes, comic books, tv series, and cartoon. (The Mego Museum has a nice page detailing the history of the Mego Apes toys in particular.) Perhaps because those two years were roughly 1/3 of my life at the time, they seemed much more significant.

But the arc of the franchise's popularity--from successful movie to sequels to cultural saturation and decline--provides an interesting lesson from contemporary pop culture. The franchise had an enormous output in a short period of time. While other sci-fi franchises, most notably Star Wars and Star Trek, have had longer, more sustained outputs, one has to wonder if the Apes franchise doesn't present a better model. At the very least, this phenomenon rode the zeitgeist wave to its very end and then, with a few exceptions, abruptly stopped.

However, it is curious that a sustained Apes revival hasn't happened in the way that other franchises have experienced. Perhaps the one major attempt--Tim Burton's 2001 film--was so dismal and disappointing that the series will need several decades to recover. It's a shame, too, because we are living in a time, much like the world of the late 60s, where the allegorical power of Planet of the Apes could again be tapped.
Posted by Dr. K at 8:44 PM

While other sci-fi franchises, most notably Star Wars and Star Trek, have had longer, more sustained outputs, one has to wonder if the Apes franchise doesn't present a better model.

I completely agree and have thought the same thing with the Harry Potter series (which seems to be running out of steam now?)

Both Pirates of the Carribean seems to have benefitted from this type of quick get in/get out franchise mentality.

We definitely need more Apes. I saw the cartoon series is available on DVD now and that can't be a bad thing.