So, I was wracking my brain the other night, trying to remember if I'd ever seen a Blackhawk Christmas story that I could use in celebration of the coming holiday. Then it dawned on me that Mark Evanier had to have written one during his early 80s run on the series. That seems like just the thing that Evanier would do.

I wasn't disappointed. While looking through the Evanier/Dan Spiegle run, I found "A Blackhawk Christmas Tale," starring Olaf, in Blackhawk 268 (Mar. 1984). 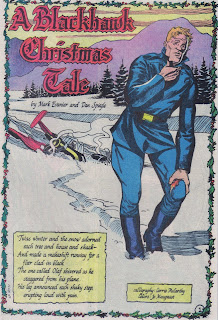 And what's even better, the story is written in rhymed verse.

Now, before I get started here, I just want to say that I think the Evanier/Spiegle issues of Blackhawk are just fantastic--probably the best thing that Evanier ever wrote, and I'm a fan of his DNAgents and Crossfire series as well. That being said, Evanier has a tendency to veer toward the sentimental, and while the sentimental can be forgiven in a Christmas story, it does lead to a problematic and overly simplified message at the end of this particular story.

Also, Evanier is not a great poet by any stretch of the imagination. He often uses a convoluted syntax to get his rhymes in the right place, and his lines don't always scan, as we can see in the first lines of the verse below:

(But I do have to applaud Evanier for rhyming "act of fate" with "a Nazi in a BF108" in an earlier stanza.)

Anyway, Olaf is shot down by a Nazi plane, and he crashlands in a snowy field, escaping the wreck with a wounded leg. The Nazi lands to ensure his kill was successful, so Olaf has to find a place to hide fast. He comes across a cabin inhabited by a Jewish family named "Meyer." The Meyers care for the wounded Swede, and Olaf then asks them how the family got to this place.

Instead of giving Olaf a simple answer, however, the father tells the entire history of the Jewish diaspora. 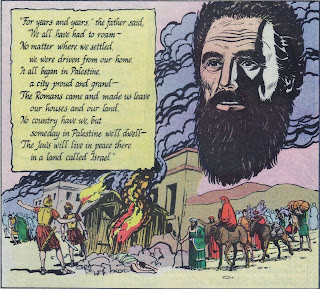 The Nazis, meanwhile, have trailed Olaf to the cabin, where they break in and attack the family. 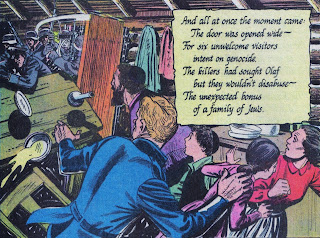 Once again, though, I have to give Evanier some credit for these top-notch rhymes: wide/genocide, disabuse/Jews.

Olaf manages to escape out the back with the family, and just as they leave, a huge blizzard kicks up.

Miraculously, however, the storm parts, allowing Olaf and the family to gain freedom while the Nazis get frozen in their tracks. 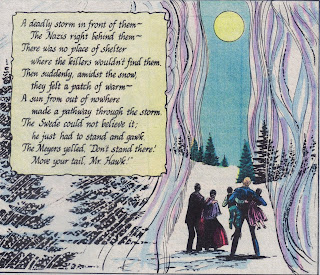 Now, here's where I think Evanier's sentiment goes wrong. It's one thing to include a miracle in a Christmas story (and let's ignore for a minute that this is called "A Blackhawk Christmas Story" even though its primary subject is a Jewish family). But having God intervene to save one Jewish family during the Holocaust leads one to wonder why similar miracles weren't produced for, say, the other 6 million Jews that the Nazis did manage to kill. Not a real successful ratio.

As he heals from his leg wound, Olaf asks the Meyers to teach him about Chanukah . In turn, Olaf teaches them about Swedish Christmas traditions. 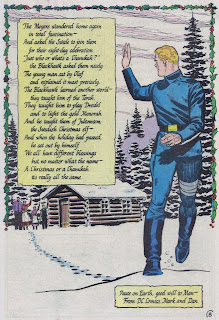 Interestingly, Olaf leaves out some of the Swedish holiday traditions that I'm familiar with from my time growing up in North Dakota: the desperate attempts to swallow the disgusting lutefisk quickly without tasting it or gagging, the emotional reservedness that would inevitably explode at the most inappropriate times during family gatherings, all of which have nothing to do with some weird Christmas elf.

And, again problematically, Evanier ends the poem with a bit of cultural equivocation that Chanukah and Christmas are basically the same thing. Even when I was a kid, I knew this wasn't true, as my Jewish friends all told me about the great gifts they got for eight nights in a row, while I had to wait (impatiently) for Christmas morning to see what Santa brought, which usually didn't total eight gifts. I know Evanier means well by sending a message of equality and love for all, and even setting aside my childhood greed and jealousy, this is a faulty sentiment that advocates ignoring the importance of cultural differences. Also, Christmas isn't even mentioned in this story until the very end.
Posted by Dr. K at 8:24 PM

If Frank Miller or Mark Millar wrote that, they would have rhymed "Christmas" with "Kick-Ass." Sure makes "Act of Fate" and "BF108" seems quaint, hun?