In his description of the Planet of the Apes timeline on the Hasslein Curve website, Rich Handley detailed two schools of interpretation when it comes to the entire franchise, which he referred to as the "circular vs. changing" debate. These two interpretations hinge upon how one reads the impact of Zira and Cornelius's time travel and the subsequent birth of their child, Milo/Caesar, in Escape from the Planet of the Apes . 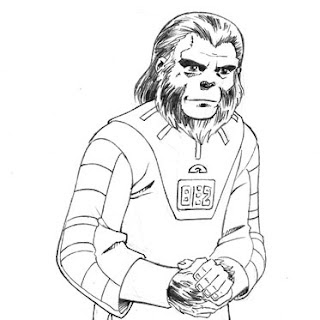 To summarize: the circular argument contends that the 5 films present a perfectly sealed time loop, in which the events of the final movie, Battle for the Planet of the Apes, set up the conditions for the events of Planet of the Apes, though more than 1950 years separate the periods of the two movies (not counting the framing sequence in Battle that takes place during 2670).

As pop culture debates go, this one is much more interesting and intellectually complex than the debates of quality and taste that often dominate pop culture: Thing vs. Hulk, Superman vs. Batman, Marvel vs. DC, Paul vs. John (the answer: George), Beatles vs. Rolling Stones (the answer: the Kinks), Oasis vs. Blur, Connery vs. Moore vs. Lazenby vs. Dalton vs. Brosnan vs. Craig. And, of course, Star Wars vs. Star Trek (the answer: Planet of the Apes, obviously). With the Apes debate, considerable evidence can be brought to support either side, and both can help to explain some of the oddities or inconsistencies in the franchise as a whole, not just the movies.

For example, Battle ends with the revelation of the Alpha-Omega bomb in the ruins of Los Angeles, leading viewers to the conclusion that the mutant humans under the leadership of Governor Mendez are the ancestors of the Underdwellers in Beneath. That revelation seems to "foreshadow" the destruction of the earth, yet we get no explanation of how the bomb and the Underdwellers got to New York City from LA. But a lot can happen in 1950 years. The circular interpretation works best if one wants the destruction of the earth to be the ultimate outcome of the films' events (and who doesn't want that?). 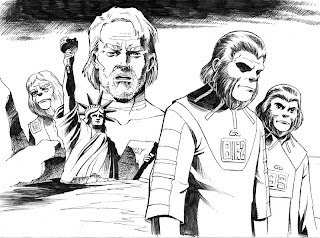 In the changing argument, the vision of harmony between apes and humans as depicted in Battle's framing sequence set in 2670 results directly from Caesar's role as Lawgiver, and his influence on ape history removes the conditions for the dystopian future of Planet of the Apes. This argument is useful in dealing with the discrepancies between the historical narrative that Cornelius explains in Escape and the events of Battle. Cornelius explains that it was an ape named "Aldo" who first spoke the word "No!" and led the ape rebellion, while Aldo (played by Sheriff Lobo himself, Claude Akins) is the militaristic antagonist that Caesar kills at the end of Battle. Because Caesar's compassionate treatment of humans wins out in the end, humans never get reduced to the level we see them in the first movie.

The circular argument helps to explain what I find to be one of the more glaring problems in the franchise: the fact that humans can speak and form communities in the tv series. The tv series takes place in 3085 (that is, according to the chronometer on the spaceship--astronauts Burke and Virdon acknowledge that the clock may have broken at some point in the journey), roughly 900 years before the arrival of Taylor (there are some problems with the date of Taylor's arrival: in Planet of the Apes, Taylor's equipment states that the year is 3978; however, in Beneath, Brent states that the year is 3955. Most sources I've looked at choose 3955 as the preferred date.). Between Battle and the tv series, then, human/ape relations have significantly deteriorated, and in the 900 years up to the first movie, humans have continued to devolve as they lose the ability to speak and form societies.

However, the tv series is such a mess of continuity that it's really difficult to try to fit it neatly into the overall narrative. In the first scene of the first episode, a dog chases a human up a tree. However, anyone who has paid any attention to the movies knows that the extinction of dogs and cats is what causes the domestication of simians, leading to their use as servants and ultimate sentience. And in that same episode, the astronauts find a picture book containing a photo of New York City in the 26th century, yet the city had been destroyed in a nuclear war according to the films. Also, the astronauts Virdon and Burke come from the year 1980, yet they seem to have no knowledge of Zira and Cornelius, who are huge media celebrities in 1971 of Escape. The creators of the series clearly had no desire to make it blend consistently with the movies.

The changing argument, however, can also be used to explain away a lot of the inconsistencies between the first two movies and later entries in the franchise. If some continuity problem comes up, one can just credit it to a time travel paradox and move on.

Another element that causes some problems for me with these films occurs in the gap between Escape and Conquest. About 20 years pass between the end of Escape and the beginning of Conquest, which takes place in 1991. During that time, we are meant to believe that a plague hits which wipes out all cats and dogs, all simians are domesticated, and then those simians evolve to the point where they're trained to do a lot of jobs that humans do. That always seemed a bit rushed to me, and it would have been better if those events were allowed to occur over hundreds of years. But then, the changing argument could be used to say that the presence of Zira, Cornelius, and Caesar in the current era accellerates the evolutionary process.

Personally, I'm ambivalent about either interpretation, but I like the way that the debate can inform unique viewing experiences. For example, I can choose to watch the films from the perspective of the circular argument during one viewing, and then watch from the changing perspective, and each experience will be subtly different. Or I can try to play the mental game of working the tv series or the cartoon into a consistent continuity, using one or both of the interpretations. Some may complain of headaches from the paradoxes of such time travel stories, however.

The art for this entry is all original work provided specially for Apes Week by Pierre Villeneuve, artist extraordinaire and co-creator of the Flashback Universe with Jim Shelley. Check out Pierre's gallary here. Thanks to Pierre for the great art, and to Jim for arranging it and sending me the files.
Posted by Dr. K at 10:34 PM

Dr. K, I've been greatly enjoying your look at POTA--and not just because of your frequent links to my timeline site. Your comments about the films have been quite insightful, and it's always intriguing to read others' opinions of the series, particularly the many discrepencies that exist among the films, and between the films and the TV series. Are you located in New York City? If so, you should join a group of us going to see the film at the Ziegfeld Theater, a massive Broadway-style theater, on March 29. In the meantime, I look forward to reading more of your blogs.

By the way, if anyone is interested in joining us at the theater in NYC--or in hearing more details about the timeline book--feel free to contact me at handleyr@optonline.net.

Sincerely,
Rich Handley
Timeline of the Planet of the Apes
http://rhandley.0catch.com/POTA

Rich--thanks for the invite. I'd love to see POTA on the giant screen at teh Ziegfield, but, unfortunately, I'm not located in NYC.

I always figured that Escape caused a splinter in the timeline, so that the future of POTA and BTPOTA wasn't going to happen as is... and would lead eventually to the future of the POTA TV show (and perhaps, too, to the POTA animated series).

So far as the dog in the TV show is concerned, given the elapsed time since Battle, it's possible that wolves or other wild canines were re-domesticated to replace what was lost (especially given the loss of pets being the reason apes were put into slavery by Conquest). Given the living conditions in Battle, I find that a reasonable explanation.

One possibility I've sometimes considered is whether or not the timelines are fractured during every time-trip involved... so Taylor's time travel in POTA created that future somehow (i.e., he or one of his crewmates were essential to preventing that future), and Brent made things worse when he went forward (thus his time-trip made the destruction inevitable).

Burke and Virdon's own trip forward in time, as well as the crew in the animated series, could be further examples of this... all the astronauts came from a pre-Escape timeline, while Cornelius and Zira created a new timeline when they took Taylor's ship back to the "present" (I could never figure out how what I always thought of as a re-entry craft could be launched myself, but I'll not get into that right now -- thus the split in the Taylor/Brent timeline.

But, you know, I'm one of those comics geeks that never had a problem understanding DC's multiverse, so I guess I have no trouble wrapping my mind around the ideal of mutiple POTA futures (well, maybe not one that includes that Tim Burton movie, which i haven't been able to force myself to watch).

When I was a kid, I thought Cornelius and Zira's presence in the 1970s and the survival of Caesar brought the POTA future into existence ... and thus, the ultimate end of the world.