Blackhawk Wingsdays 9: Dr. K Reviews The Brave and the Bold 28

I mentioned a few weeks ago that DC had announced several new projects that involve the Blackhawks, and last month, The Brave and the Bold 28 came out, which teams the Blackhawks with the Flash (Barry Allen version) in a story written by J. Michael Straczynski and drawn by Jesus Saiz. (I should note since this is a new comic that spoilers will be occuring.) As much as I was looking forward to this issue, it was a bit of a letdown, only partially because it broke one of my cardinal rules about Blackhawk stories: 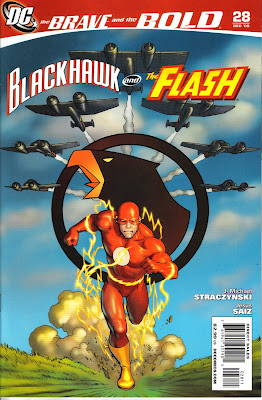 Despite what the cover shows, the Blackhawks never once fly their planes in this story.

Now, that's not a huge problem, as there are dozens, if not hundreds, of Blackhawk stories where they don't go near a plane, and I have already shown a few of those in this series. But the paucity of planes in this story leads to what is probably the biggest problem I have with this issue: there is no compelling reason for the Blackhawks to be here. They are so little used, and most of the members aren't even named in the story, that JMS could easily, and more effectively, inserted Easy Company or the Losers instead, especially considering the story's setting.

The story opens with the Flash helping some scientist test a "multi-spectrum laser" in the fields of Ardennes, Belgium. The Flash is supposed to run alongside the laser beam and measure certain fluctuations, but the experiment goes horribly wrong, and Flash is sent back in time to World War II--specifically, the Battle of the Bulge. To make matters worse, the Flash has broken his leg in the journey and can't run forward to his own time.

While hopping around and escaping the Nazis, Flash ends up captured by the Blackhawks, who think he's a Nazi spy trying to impersonate the real, Golden Age Flash. 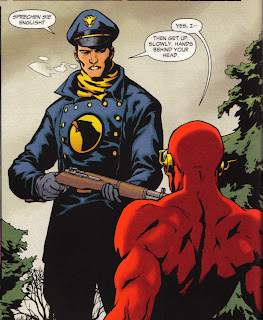 Flash tries to explain his story to them, but they don't buy it. Blackhawk, however, gives Flash one chance to prove his story's true. The team has recently smuggled some German scientists to New Mexico for work on a top-secret weapons project. Though this project is classified now, Blackhawk assumes it will be in the future's historical record, so he asks Flash to provide the name. Flash gives the correct answer--The Manhattan Project--so the Blackhawks don't kill him.

You know what I'd like to read? A story where the Blackhawks smuggle German scientists to New Mexico in order for them to develop the Manhattan Project. Unfortunately, that's not this story. In fact, there are a lot of moments like this, where JMS has characters tell about awesome events, instead of showing them. Like during a flashback, when the story stops just as the Blackhawks are getting ambushed by Germans, and Blackhawk then goes on to say that they escaped the ambush. Really? Would have liked to have seen that. And the whole Battle of Bastogne? Reduced to a one-page montage where Flash explains how the Blackhawks helped drive the Germans out of the town. That also would have been nice to see.

Anyway, the Blackhawks just happen to be in the Ardennes because they were supposed to be taking some R & R there, when the Battle of the Bulge suddenly broke out. So, we're meant to believe that, during a particularly terrible winter, the Blackhawks chose to take their vacation in this very section of Belgium.

When Flash is first captured by the Blackhawks, he's not really introduced to the team, and neither are we. Some characters are named, but few are actually identified. 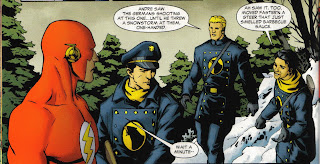 Here, for example, I assume we see Olaf in the middle. But on the right side of the panel, we have a character that looks kind of like Chop-Chop, but talks about barbecue and Texas like Chuck. However, this character is never named, so I can only assume it's Chuck, now with dark hair instead of red. In fact, as far as I can tell, only 6 Blackhawks appear in this comic, with Chop-Chop being the absent one. That certainly gets JMS out of a jam by leaving out the most racially problematic character, but I do feel kind of bad that Chop-Chop wasn't allowed to go with on this team vacation.

While holed-up in a bombed-out barn, the Blackhawks and Flash are ambushed once again by Nazis. Chuck gives Flash a gun, but the Scarlet Speedster is not comfortable with the weapon, so he decides instead to chuck a bunch of bricks at the Germans. This knocks them out, but it also pisses off Blackhawk, leading to the most interesting part of the story: 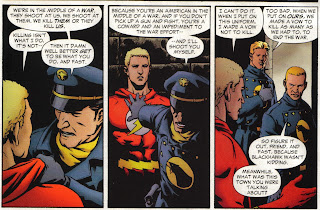 I really like this debate that Blackhawk and Flash have about using lethal force. It highlights the fact that Flash, in his normal adventures, has the luxury to make certain choices that soldiers in wartime don't have. Flash's actions simply stopped the ambush, but they really did nothing to further the goals of the war, which was to kill as many German soldiers as possible. This moment really got my hopes up that this story would turn around.

However, that was not the case. Flash ends up donning an American military uniform and spends the next few weeks fighting alongside the Blackhawks at Bastogne. This exciting, potentially action-packed part of the story is, as mentioned earlier, limited to a one-page montage. Once his leg heals, Flash gets ready to return to his own time. Before he goes, though, he's asked some questions by Blackhawk: 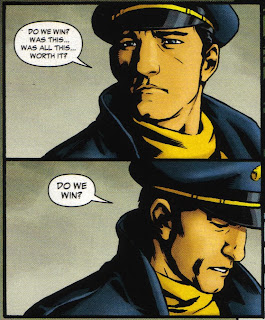 Of course, anyone who has ever read a time-travel story will know what Flash's answer has to be, right? I mean, he couldn't possibly give Blackhawk information about the outcome of events that haven't happened yet, and by doing so, potentially change history, right? 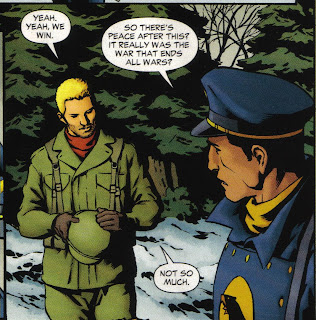 Flash goes on to reveal that war, in fact, keeps on happening well into the future, which really seems to boost Blackhawk's morale. Flash also explains that the planet of the apes is really Earth, that Kristin shot J.R., that Darth Vader is really Luke Skywalker's father, and that Dumbledore dies. Then Flash runs back to the present, where he has only been gone for a few seconds.

This issue was disappointing, to say the least, and I have to wonder, for how many readers is this their first Blackhawk story? While I had read a lot of Blackhawk comics when I was a kid, the first one that really clicked for me, where I thought the Blackhawks were really cool, was The Brave and the Bold 167, where the Golden Age Batman teams up with the Black Knights during WWII. I'll be covering that issue later, but that's the comic that made me want to read more Blackhawk comics, and so it would have been nice if The Brave and the Bold 28 could have that same potential.
Posted by Dr. K at 7:49 PM

If it's any consolation, this was my first Blackhawks story (I'm 15) and this has spurred me to look into some of their older books. Well, this and wanting to read more WW2 comics, but that's neither here nor there. If this is them on an off day, I look forward to their greater adventures!

Even their goofier adventures were more fun than this looks. This is the 3rd bad review I've seen on this issue so in spite of my love of all things BLACKHAWK, I continue to pass on it.

Oh and without Chop-Chop, doesn't that make them the Magnificent Six?

Andraxx--start with Mark Evanier's eighties BLACKHAWK series with artist Dan Spiegle. It didn't sell at the time and there's no huge demand so it's probably cheap in the back issue bins but it was one of THE best written and drawn comics of that period and in my opinion BLACKHAWK's finest moment since the forties.

I would second Booksteve's recommendation of Evanier and Spiegle's 80s Blackhawk series. Though it is cheap to find this series in the back issue bins, I have had some difficulty putting together a complete run, as I'm about 3 issues away from it. I read this series when it originally came out, but for some reason those issues went missing from my collection some time ago.

Any suggestions for slightly more attainable runs? My comic shop is woefully understocked. Are the DC Archives or Showcase any good?

Yeah, you pretty much nailed everything I thought of this issue as well. Between this issue and the last one, (HOW in God's name do you eff up a Dial H for Hero story?!) I'm done with this title. Is the JMS helmed !mpact revival this bad as well? I haven't been buying those titles as I was thinking I'd get them in a collected edition.

Andraxx, the Showcase book is a lot of fun, but it covers a period in Blackhawk history where the stories had moved away from the war-time mileau, and the series was a mixed bag of crime-fighting and sci-fi stories. The archive collection contains some fantastic Reed Crandall art, but the stories are very dated. If you're looking for collected World War II stories, then the archive is your only option; if you want crazy Silver Age stories, then the Showcase book is worth getting.

Also, DC is putting out a collected edition of Howard Chaykin's Blackhawk miniseries, and that is pretty darn good.

JMS has the tendency to tell not show, it's bigtime in THE TWELVE where he has the Phantom Reporter talk about the identities and skills of each character while they stroll through a bunker, cross rooms, go down stairs, etc instead of them actually fighting Nazis and super-Nazis.

Maybe it's carryover from him writing sci-fi for television and he still thinks and writes as if he has budget constraints on special effects, choreography, number of characters with speaking parks, etc.

I've seen a couple of negative reviews for this issue focusing on the Flash's decision to impersonate a soldier and kill Nazis, this is the first to ding how the Blackhawks were used.

How did you like the Brave and Bold issue a bit back where Waid and Perez teamed them up with the Young Allies?

Kid Kyoto: I really liked that Waid/Perez BATB story, and I think I'll have to cover that sometime in the future. I just wish it were a full-length story.

My introduction to the Blackhawks came courtesy of Martin Pasko and Rick Burchett's ongoing series following Howard Chaykin's miniseries. Those were very good comics, IMO. If I had to recommend some Blackhawk comics, those would be the ones.

Getting back to the Brave and the Bold issue, it seems that Blackhawk was portrayed as very pro-USA... I hope they're not retconning him back to his American Bart Hawk persona. I liked the Polish Janos Prohaska alter ego, it had more depth.

Reading the list of spoilers Flash should have told Blackhawk, I thought "And Rosebud is the name of the sled."

It was one Blackhawk might have recognized. "Damn it, I haven't seen that yet!"

Not a big fan of Chaykin's run, I must admit.