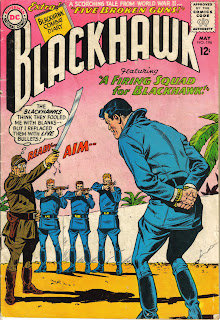 As I mentioned last week, Blackhawk 196 (May 1964) marks a major change in the series, as new writers Arnold Drake and France Herron took the team in a new direction (Dick Dillin and Chuck Cuidera remain on as artists). With this issue, the Blackhawks would no longer be involved in generic crimefighting on the domestic front; instead, their adventures would involve international espionage as they go to work for a secret UN agency under the lead of the mysterious and faceless Mr. Cipher. 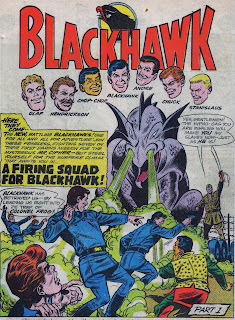 Hey, Andre, be careful who you call "Frog"; that can boomerang on you.

The story begins with the team arriving at UN Headquarters after they have been called in for a special meeting with Mr. Cipher, who has a mission for them: they must go to the South American country of San Lajunta to capture a Japanese scientist named Sessue Yokomata, who is wanted for war crimes and believed to be making fantastic weapons for the brutal dictator of San Lajunta, Gonzagas.

Note another major change to the series evident in this panel: Hendrickson has been given some Grecian Formula.

Among Yokomata's fantastic machines are a giant eye and some kind of octopus machine, which we will see later.

The Blackhawks agree to take the mission, and they prepare to parachute into San Lajunta under cover of night. Andre, as usual, clearly has his mind in the game, as all he does is complain about the smell of the camouflage paint. Luckily for Andre, he is always prepared: 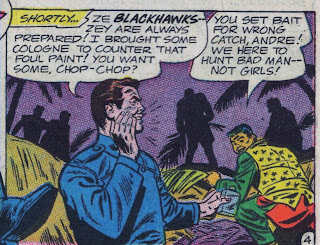 You see, Chop-Chop, Andre is always on the hunt for the ladies.

The team breaks their way in to Yokomata's camp, and, disguised in radiation suits, they take some quick films of the joint. However, they are quickly discovered, and Yokomata launches his giant bloodshot eye: 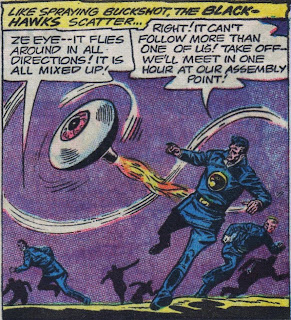 The team rendezvous at the assembly point, only to find their leader missing. They go back to the camp and discover a shocking surprise: 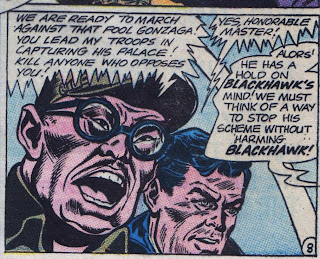 Blackhawk is now working for the enemy! Also, Yokomata is actually their old wartime enemy, Colonel Frog. It's nice to see that, while the series is being taken in a new direction, the creators haven't lost sight of the series' core quality: unapologetic, blatant racism. Especially against Asians.

It turns out, Yokomata/Colonel Frog was only pretending to work for Gonzagas, but in reality, the Japanese scientist was using the dictator's resources to create machines to take over San Lajunta himself.

The Blackhawks attack Frog's infernal devices, and they succeed in destroying the octopus thingy and freeing Blackhawk. However, they don't realize until it's too late that Blackhawk is still under the sway of Colonel Frog, and they are led into a trap that causes them to become Frog's slaves as well. 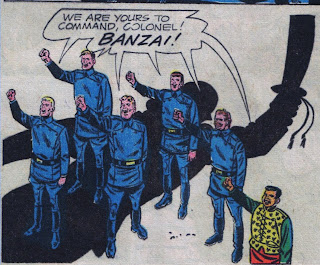 Blackhawk even makes an announcement to the world that Yokomata has taken over San Lajunta, and they are now making their way to conquer the neighboring country of Carbonda. Meanwhile, word gets back to Mr. Cipher that the team has failed, so he orders an attack on the Blackhawks.

Blackhawk fights off the attack in another of Frog's experimental aircraft. While attempting to escape, Blackhawk takes the plane high into the stratosphere, but that causes his cabin pressure to drop dramatically. Blackhawk passes out, but recovers himself in time to correct the dive. He also discovers that the pressure drop somehow caused him to be cleaned out of Frog's hypnotic gas, and he is now completely in control of himself.

Frog, however, has figured out that Blackhawk is free, so he sics the other team members on him. Blackhawk manages to lure the team into a pressure chamber that's being used to prepare soldiers for space missions, and he frees them of the gas's influence as well.

Nonetheless, they pretend to still be under Frog's control, and Frog wants them to execute Blackhawk by firing squad. Then, things get complicated: 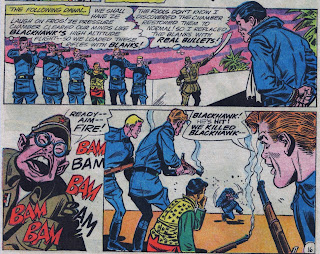 Don't fret. Blackhawk isn't dead--he had another backup plan, which involved creating a makeshift bulletproof vest out of the octopus's windshield. Blackhawk then shoots Yokomata in the hand and captures the would-be dicator.

When the team returns to the US, they find that Mr. Cipher is very pleased with their success, despite the fact that they stumbled on to it through dumb luck.

Thus, a new status quo is established for the Blackhawks, as they become agents of the UN.

This story is likely written by Arnold Drake, and a second story in the issue, which flashes back to World War II, is by France Herron. More changes were to come for the team in the following months, beginning a long period of shakeups where DC editorial tried to figure out what to do with this series. Reconfiguring the team as Cold War spies, though, makes a lot of sense, and it definitely gives the series a clear purpose that it had been missing for about ten years.
Posted by Dr. K at 10:00 AM

The Blackhawks should have just joined NORAD and called it good. :-)

a silly question, but why didn't the Blackhawks just shoot Frog, instead of loading their guns with blanks?

That is one racist illustration on the firing squad page.