Back in October, during the Halloween Countdown, I covered the lead story in Blackhawk 199, where the Blackhawks fight a band of mutated alien mummy insects. Between Blackhawk 196 and 199, the team did away with their classic "black-but-looks-blue" leather uniforms for something more colorful and modern. This was, of course, a huge mistake--one of many that will plague this series until its cancellation several years later. (It was in issue 197, to be exact--an issue that is, unfortunately, not in my collection. Neither is 198, which features a new origin for the Blackhawks. I need to get my hands on those comics!)

The second story in issue 199 anticipates one of the more dramatic changes to come in the series, as three of the Blackhawks are turned into super-powered freaks in "The Fabulous Blackhawk Freaks!" (Which, unfortunately, does not involve the Blackhawks teaming up with Gilbert Shelton's Fabulous Furry Freak Brothers, though that would have been awesome.) 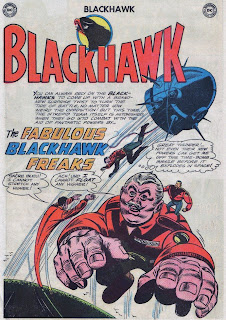 As the story opens, the Blackhawks stumble across some bizarre landscaping being done in some random, unnamed forest: an antigravity beam is tearing up trees. Blackhawk splits the team up into two groups: Andre, Hendrickson, and Chop-Chop head off in one direction, and Blackhawk, Stanislaus, Chuck, and Olaf go in the other. Blackhawk's team is quickly confronted by one of the innumerable alien races that artist Dick Dillin created during his long career: 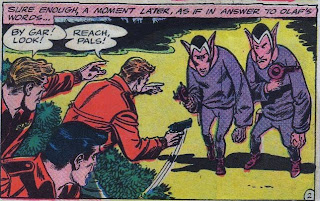 That team is then captured in a giant bubble that inspires Chuck to blurt out one of his many catch-phrases:

They break the bubble by rolling it down a hill. Meanwhile, the other team has found the aliens' ship, and, in typical Blackhawk fashion, they monkey with shit until it gets them in trouble: 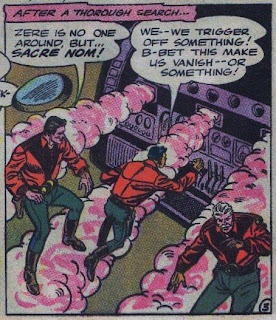 The two teams reunite in order to compare notes, and we get to see that the alien gas wasn't as harmless as they thought. First, Hendrickson inflates into a giant flying Dutchman:

(Note: I didn't make up that corny pun--it's actually in the story.)

And Chop-Chop anticipates Major League Baseball over the past 15 years or so:

Everyone quickly returns to normal after demonstrating their new powers, and Blackhawk decides to delay worrying about that in favor of dealing with the immediate problem: the new alien threat. To this end, Blackhawk splits the team up yet again, since that worked so well last time. Now, though, he goes off alone to find the aliens, while everyone else goes off to destroy the alien ship.

When Blackhawk finds the aliens, however, he discovers that they are not the threat his xenophobic prejudices caused him to think they were. They are, in fact, here on Earth to dispose of a dangerous bomb that crashed on the planet. They were planning on hauling it away into space before it detonated.

Blackhawk tries to warn the other team, but his cheap-ass radio is busted, and, in a rare instance of efficacy, the other members of the team have actually accomplished their mission, using Chop-Chop's new strength to wreck the ship.

Now they need a new plan to get the bomb off the planet. Blackhawk hastily puts together a half-assed strategy to carry the bomb on Hendrickson's inflatable back and then have Chop-Chop launch the bomb into space once Hendy achieves his maximum height.

And, of course, they fuck this up: 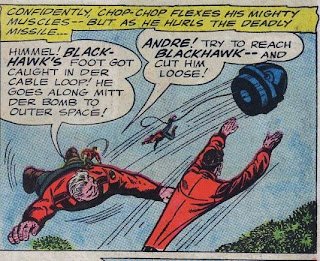 Andre tries to stretch out and reach his leader, but Blackhawk's velocity is too fast, and he's soon out of reach. And, again as usual, he has to save himself while his useless team members sit and watch.

The bomb then goes off harmlessly in the stratosphere, while back on Earth, the new powers have worn off, and the Blackhawks now have to fix the aliens' spaceship manually.

By the way, I know I've dropped the ball lately on the Gil Kane punches, but I plan to get a couple up in the next few days in order to get back on schedule. My apologies for that.
Posted by Dr. K at 9:04 AM

Wow. That has to be one of the freakiest of Blackhawk stories.

I hate those red uniforms. :-(